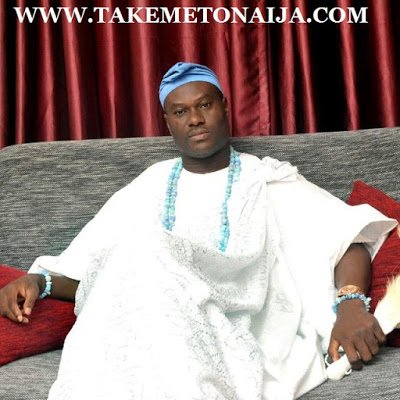 Enitan Ogunwusi  is a Nigerian accountant and the 51st Ooni of Ife. He succeeded the late Oba Okunade Sijuwade, who died on July 28, 2015. The Vanguard Newspaper described him as “an astute entrepreneur driven by turning impossibilities to ‘possibilities’”. His reign has been marked by a modern outlook and a number of progressive policies.

The Ọọni is a qualified accountant. He attended Loyola College Ibadan between 1985 and 1991. Afterwards, he attended The Polytechnic Ibadan to study Accounting.
In 2002, he led the Federal Government of Nigeria delegation to Canada that enhanced alliances through a partnership with the government of Ondo State on solid mineral.

On October 26, 2015, Adéyẹyè was selected as the king-elect out of 21 contenders to the Ọọ̀ni stool in an announcement by the Governor of Ọ̀ṣun State, Ọ̀gbẹ́ni Rauf Arẹ́gbẹ́ṣọlá. As a prince from the Giesi Family whose turn it was to produce a king, he beat out a number of competitors including his elder brother. Oba Ogunwusi received his Staff of Office from Osun State Governor, Ogbeni Rauf Adesoji Aregbesola on Monday 7 December 2015 at Enuwa Square, Ile-Ife in the presence of several dignitaries from all walks of life, including the Vice President of Nigeria, Prof. Yemi Osinbajo. The new king promised to unite the Yorùbás under a peaceful and prosperous reign.

Since his coronation, the king has made news for a number of notable actions and pronouncements including the promise not to re-litigate supremacy battles with other Yorùbá kings. On January 17, 2016, Ọọ̀ni Ògúnwùsi broke a 79-year-old antagonism between the thrones of Ifẹ and Ọ̀yọ́ by visiting the Aláàfin, the first of such visits in eight decades by an Ifẹ monarch. He has instituted a number of progressive causes in Ilé-Ifẹ̀, including a cocoa farm meant to feed thousands of widows in the state.

On June 12, 2016, Ọọni was presented with the key of the City of Sumerset, Franklin Township in New Jersey and honoured with the proclamation of the town of Franklin alongside his wife, Olori Wuraola Ogunwusi, the Yeyelua.

He was married from 2008 to 2016 to Adebukunola Bombata. He is now currently married to Wuraola Zynab Otiti, a marriage reportedly arranged by the Oracle. The wedding took place in Benin City while the reception held in Ile-Ife.

HE TALKS MORE ABOUT HIMSLEF AND HIS LOVE FOR TOURISM BELOW:

Kabiesi, you can afford to
observe your honeymoon in seven star hotels  in Dubai or five stars
hotels in Paris. You can afford to go to US and many other beautiful
countries to buffet your honeymoon. Why La Campagne Tropicana Beach
Resort in Nigeria?
There is a saying that charity begins at home. It’s very important that
we have home gown tourism. I am very passionate about domestic tourism.
Why should I go abroad? Why? Does it have any economic meaning? No.  It
does not and I am an advocate of anything Nigerian; I walk with it, I
sleep and wake up with Nigeria, it rings in by brain and I am Nigerian
to the core. This is one of the ways to promote Nigeria and encourage
the youths.
Kabiesi, why are you a Nigerian to the core?
I have no choice than to be who I am.  Firstly, I am a Nigerian by
birth and also by inclination. I am a Nigerian by every measure of it
and regardless of my international exposure, I am still a Nigerian. So, I
have to act as such. You too should be who you are in acts, deeds and
perception.  That is the only way we can grow this nation. We have to
encourage our youths. Before I became a king I could not lose the grip
of my relationship with the youth, I believe in youth empowerment and I
am very close to them. The general saying that do not forget your root,
my root  are the youths. The stool is dedicated to them and they are
over 70 per cent of the entire population. I flew in from Sokoto to La
Campagne where I went to launch a project with His Eminence, the Sultan
of Sokoto. Our major discussion was Nigeria and nothing else other than
Nigerians how we’ll continue to empower youths and tourism which is an
important aspect that can help in that direction.
Why do you think tourism?
Tourism is important. It is one economic sector which Nigeria, as an
entity, and Nigerians as a people, have not come to terms with, in
relations to its economic indispensability. Tourism is a movement. It
deals with movement of the people and its attendant’s economic
implications. Since I came here,  I met a lot of Nigerians who are
aware. I don’t know how a lot of people are aware of my staying here and
they have been coming here in droves to visit me and there is no way
their visit will not rubbed off  on the economy of this area. This is
one of the impacts and efforts of tourism. I am a tourism gospel
spreader and I cannot or no longer hide myself. So I have to continue to
preach the gospel of positivity on things about the country in such a
way that it will positively affect the growth of the country. If we have
positive movement in the area of tourism, it will empower a lot of
youths. Look, when I came here, I was very impressed with what I saw. I
was welcomed by over 100  youths;  the ones that were beating the drums,
the ones that displayed traditional dance, (male and female) the ones
that were smoking sea foods, over 100 youths being engaged here and
being paid for work done in this tourism enclave!
How do you feel about your decision to spend your honeymoon here in this village at this tourism enclave?
I just do what is supposed to be done. This is what we should do to
encourage local investors in tourism sector and keep our youths
employed. Nigerians must learn and embrace the culture of patronising
the numerous tourism sites for whatever reasons.  My coming here will
domesticate my spending for the benefit of the workers and the public in
general. If 30 per cent of Nigerians honeymoon spenders patronise local
investors, the domestic tourism will grow, our investors will make
money and the workers will be okay. You can imagine if the president of
this country goes to Obudu Cattle Ranch, that is a big statement or the
Senate President or Vice President goes to Tinapa to just go there to
relax with his family or some of the governors go to Yankari Games
Reserve. It will not only boost the economy of the sector, it will
domesticate our spending and improve the society for better.