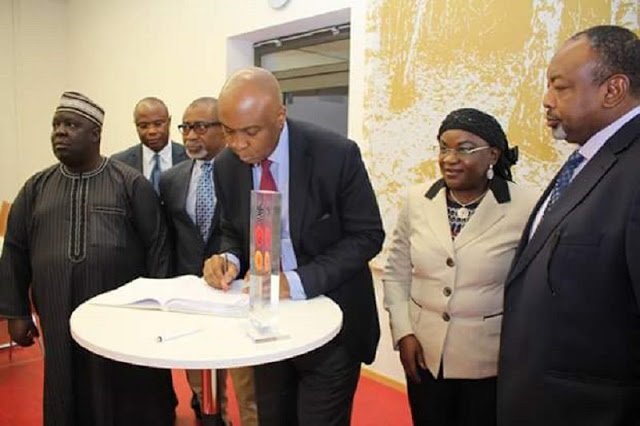 Senate President Dr. Bukola Saraki led a delegation that was recently in Berlin, Germany to source for ways to boost Nigeria’s power supply.
While
in Germany, the Senate President inspected German Village, Feldheim,
where residents combined efforts and local resources to produce clean
and renewable energy. The energy self-sufficient village is located 70
kilometres outside Berlin.
After the inspection, Saraki said that
the National Assembly will amend the laws on power generation,
transmission and distribution to solve Nigeria’s energy crisis.

A
statement by his Special Adviser (Media and Publicity), Yusuph
Olaniyonu, said that the achievement of the Germans was possible in
Nigeria if only the leadership and the operators could be serious and
demonstrate the will power. He said:

“Yesterday, as
part of my official visit to Berlin, Germany. I visited a German
Village, Feldheim, where residents combine efforts and local resources
to produce clean and renewable energy.

“Power supply remains top in the agenda of the Senate as it is a key
instrument for eradicating poverty and unleashing the potentials of the
people. That is why we had a workshop on power sector last month. It is
also why we are here to see the experiment and success of the people of
Feldheim and see what our people can learn from it.

“We have to amend the laws to allow communities to generate energy
that is more than 10 megawatts and even the laws on power transmission
and distribution has to be amended to allow more creativity and
involvement from the private sector.”

While briefing
the delegation, Project Manager of the facility, Werner Frohwitter said
the project was one in which “citizens take their energy supply into
their own hands” as they contributed money to build biogas plants which
use slurry and manure from their pigs and cows and wind farms. Frohwitter
said that though the village has a population of 140 people, it hosts
about 4,000 visitors yearly comprising students, politicians,
researchers, scholars and journalists who want to learn about how the
people’s efforts led to the generation of 10mw of electricity, from
which they sell the excess to the national power grid.
The project
manager said Feldheim is now a community which produces “safe, local,
economic and ecological supply of heat and electricity organized by and
under the responsibility of the citizens independent from the grids of
conventional power utility companies”.
On their return to Berlin
on Wednesday night, the Senate delegation also had a discussion with Mr.
Thomas Silberhorn, the Parliamentary State Secretary to the Federal
Minister for Economic Co-operation and Development on how to foster
economic exchange between the European giant and Nigeria.
Just
last month, Minister of Works, Power, and Housing, Babatunde Fashola had
said that Nigeria won’t be able to have a regular and sustainable
electricity power supply except through the mixture of conventional and
renewable energies.
Speaking at the launch of MTN/Lumos
mobile solar electricity, Fashola said the country, which still relies
heavily on gas and hydro as sources of its energy supply, will only
achieve 30% renewable energy generation by 2030.


He
said the government had embarked on a programme to supplement the
conventional sources of energy with renewable, adding that it is only
the combination that can get the country stable and sustainable power
supply.