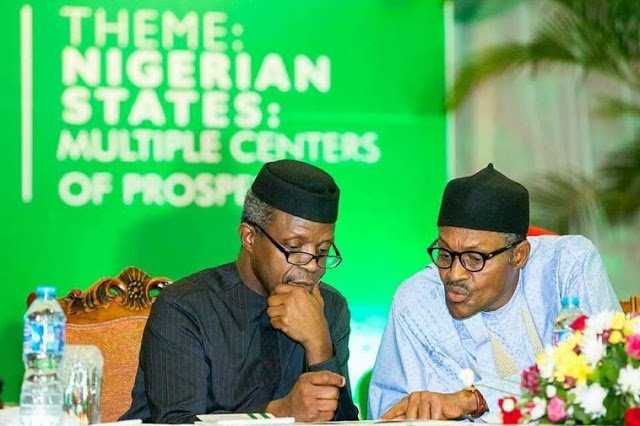 It is exactly 32 days today that Nigeria’s President, Muhammadu Buhari left the nation for a medicinal checkup in the United Kingdom.

He was expected to resume February 6 from his medical checkup, yet the President kept in touch with the National Assembly educating the parliament of his craving to extend his leave keeping in mind the end goal to finish and get the consequences of a progression of tests suggested by his specialists.
The acting, Professor Oluyemi Osinbajo, who had a lengthy phone conversation with President Muhammadu Buhari in one of their conversation said the president was hale and hearty, and was in no position to disclose the health status of President Muhammadu Buhari to Nigerians.

1. Professor Yemi Osinbajo has presided over the four Federal Executive Council meeting as Acting president.
2. January 23, 2017: The acting president hosted the 2nd Presidential Quarterly Business Forum which had representation from the organised private sector. Speaking at the forum, Osinbajo said “sustainable economic growth is only possible if it is private sector-led”.
3. January 24, 2017: The Presidency released over N375 million to feed a total of 677, 476 primary school pupils in five states.
4. January 24, 2017: Osinbajo while speaking at the monthly meeting of the Presidential Enabling Business Council (PEBEC) at the State House, Abuja said a system must be put in place to punish bad behaviour in the country. He accused some government agencies of frustrating the ease of doing business in the country.
5. January 27, 2017: Osinbajo during a meeting with the Executive Director of the United Nations World Food Programme, Ms. Ertharin Cousin, at the Presidential Villa in Abuja said handling the Internally Displaced Persons (IDPs) in the North East was very tough.
6. January 30, 2017: The Acting President met with Speaker of the House of Representatives Yakubu Dogara and Senate leader, Ahmed Lawan on the 2017 Appropriation Bill and the ailing nation’s economy.
In this meeting, deal was reached to allow the government take $1billion Euro bond.
7. February 01, 2017: Acting President Yemi Osinbajo swore-in five new commissioners of the National Population Commission (NPC) in Abuja screened by the Senate.
8. February 08, 2017: He forwarded the name of Justice Walter Onnoghen to the Senate for confirmation as the Chief Justice of Nigeria on request of President Muhammadu Buhari.
9. February 08, 2017: The Acting President held a closed door meeting with the Emir of Kano, Sanusi Lamido Sanusi and also met with Labour leaders who staged a protest to the Aso Rock villa. During the meeting with the labour leaders, Osinbajo said Nigerians should not expect ease without a level of pain.
The acting President also hosted the Oba of Lagos, Rilwan Akiolu at the Presidential Villa, Abuja.
10. February 10, 2017: As part of a continuing tour of the Niger Delta oil-producing communities, with a view to finding a lasting solution to the peculiar problems of the region by engaging with the people and communities, the Acting President, Professor Yemi Osinbajo, visited Bayelsa, Imo and Rivers, where he said it would require $1bn to clean-up Ogoni land.
11. February 18, 2017: The Acting President signed seven bills into law passed by the National Assembly.