The story of Moremi which captures the heroic deeds of a woman, who dared the odds to save her people, is very alive in Ile-Ife.

The Oloori Moremi lived in the 12th century, hailed from Offa, married to the then king of Ile Ife, a kingdom that is said to have been at war with an adjoining tribe who were known to them as the Forest people (Ìgbò in the Yoruba language, though the said tribe is believed by scholars to have had no relation to the contemporary Ìgbòs of modern Nigeria). Scores of Ife citizens were being enslaved by these people, and because of this they were generally regarded with disdain by the Yoruba city-states.
Moremi was a very brave and beautiful woman who, in order to deal with the problem facing her people, offered anything she had to give in sacrifice to the Spirit of the river Esimirin so that she could discover the strength of her nation’s enemies.
She is said to have been taken as a slave by the Igbo and, due to her beauty, married their ruler as his anointed queen. After familiarising herself with the secrets of her new husband’s army, she escaped to Ile-Ife and revealed this to the Yorubas who were able to subsequently defeat them in battle.

Following the war she returned to her first husband, King Oramiyan of Ife (and later Oyo), who immediately had her re-instated as his Princess Consort. In order to fulfil the pledge she made to Esimirin before embarking on her mission, her son Olurogbo was given in sacrifice to the Spirit because this is what it asked her for when she returned to its shrine.
The Edi Festival is said to have then been started as a means of celebrating the sacrifice the princess made for the people of Yorubaland. Furthermore, a number of public places are named after her in contemporary Nigeria, such as the female residence halls at the University of Lagos and Obafemi Awolowo University. 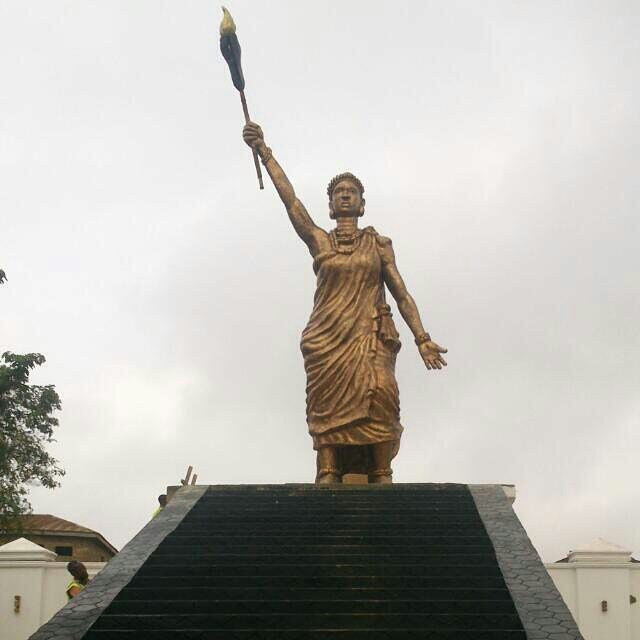 In 2016 the Ooni of Ife, His Imperial Majesty Oba Adeyeye, Ojaja II, constructed a statue on the same spot Moremi lived several centuries ago .

Moremi Ajasoro’s statue takes over from the statue of Jesus (28 feet) constructed in Imo state, as the tallest in Nigeria.

the statue was “100 percent locally constructed by Nigerian engineers and  youths sourced with sole  Nigerian Materials”.
Today, if you stand at the very front of the palace of the Ooni of Ife, in Osun state, you will see an impressive statue of a woman holding a fire brand. Upon reflection, one can say that the firebrand also symbolizes the power of a woman’s intuition.