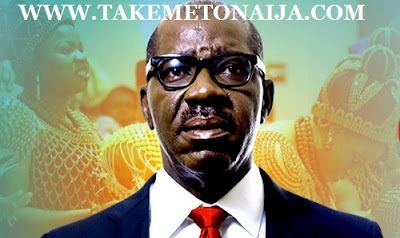 INTRODUCTION
Godwin Obaseki is Governor of Edo State since 12 November 2016.He is the pioneering and current Chairman of the Edo State Economic and Strategy Team which was inaugurated by Governor Adams Oshiomole in March 2009

Mr. Godwin Nogheghase Obaseki was born on Wednesday the 1st
of July, 1959 in Benin City, Edo State to the families of Obaseki and
Gbinigie of Owina Street, Ogbelaka Quarters. He is the third child of
Late Pa Roland Obaseki and Madam Stella Gbinigie (MON).
He had his primary education at St. Matthews Anglican
Primary School Benin City and attended Eghosa Anglican Grammar School,
Benin City before he proceeded to the University of Ibadan, where he
bagged a Bachelor of Arts degree in Classics.
Mr. Godwin Obaseki thereafter did his National Youths Service Corps primary assignment in Jos, Plateau state..
The young Obaseki then proceeded to the prestigious Ivy
League Columbia University and Pace University both in New York and
bagged an MBA in Finance and International Business respectively.
Mr. Obaseki is a Fellow of the Chartered Institute of Stock
Brokers, Nigeria and an Alumnus of the Lagos Business School Chief
Executive Program.
It was refreshing news when he was nominated as a Global Leader for Tomorrow (GLT) by the World Economic Forum in 2001.

Godwin Obaseki began his career over 30 years ago and has established
track records in Investment Banking, Asset Management, Securities
Trading and the Public Sector both internationally and in Nigeria. He
started out in 1983 with Capital Trust Brokers Limited Lagos as a
stockbroker where he excelled and subsequently worked with International
Merchant Bank (an affiliate of First Chicago Bank). In 1988 he joined
AVC Funds Limited, Lagos where he served as a Project Manager and led
the core team that set up two of the new generation banks which
eventually reshaped the face of the banking industry in Nigeria. Between
1993 and 1995 he worked in New York as a principal of Equatorial
Finance Co, a Financial Advisory firm with a focus on Africa and
providing Structured Trade Finance for African related transactions
through credit, financial advisory and risk insurance.

He Founded
Afrinvest West Africa Limited (formerly Securities Transactions &
Trust Company Limited (SecTrust)) in 1995 as the pioneer Managing
Director. The firm has since grown to become a leading Investment
Banking and Investment Management firm in Nigeria. In 1995 SecTrust was
appointed the correspondent stockbroker for Nigeria by the International
Finance Corporation (IFC). In 1996, SecTrust established the first
derivative product, the Nigerian International Debt Fund (NIDF) on the
Nigerian Stock Exchange, which allowed Nigerians invest local savings in
US Dollar instrument. This fund has outperformed projections on
returns.

SecTrust pioneered and was local adviser on the first
global offering by a Nigerian bank through the issuance of Global
Depositary Shares (GDS) to raise UD$50 million from the international
Capital market. Afrinvest has acted as advisers on some of the largest
and most significant transactions in the Nigerian capital market since
2005.

Afrinvest is one of the most trusted advisory firms in the
domestic corporate finance market, pioneering major innovations and
providing leadership in the Nigerian Securities market. The Firm has
advised on numerous landmark transactions including the first Eurobond
Issue by a Sub-Saharan Africa Corporate (outside South Africa); the
first ever simultaneous merger and tender offer transaction in
Sub-Saharan Africa and the largest ever listing on the Nigerian Stock
Exchange. Afrinvest has been ranked as a major Investment Research firm
which is at the forefront of playing instrumental roles in the
introduction of new financing products such as Eurobonds and Global
Depository Receipts to Nigerian Companies. Mr. Obaseki is presently the
Chairman of the Board of Directors of the firm which won the Best Asset
Management Firm in Nigeria (2014) Award by the Wealth & Finance
International Magazine Finance Awards.

Mr.Godwin Obaseki
currently serves as the Chairman of the Edo State Government’s Economic
and Strategy Team (EST), a position he has held since March 17, 2009 Pro
bono publico.

Key achievements as chairman of the economic team
of Edo state Government include: Documentation of State Economic
Development framework through Sectors’ Strategic Planning which is
reviewed and updated on an ongoing basis; Introduction and enculturation
of retreats as a platform to ensure all parties engagement not only in
planning and executing state development initiatives but also in
monitoring and evaluation of outcomes; N25 Billion Infrastructure
Development Bond from the Nigerian Capital Market in 2010; $225 Million
Concessionary rates Development Loan from the World Bank with the 1st
Tranche of $75 Million already accessed; Successfully hosted Sector
based Economic Summits and Policy Dialogue Series including the Power
Round Table in 2010, 2011 Education Round Table and 2012 Agribusiness
Round Table.

These summits have translated in measurable and desired outcomes including:

Azura-Edo IPP project with over $1 billion in FDI currently under development in Ihovbor, Uhunwode LGA
Education
Reforms which have translated to significant improvement in Educational
Infrastructure and student performance in WAEC and other Exams.

Following
the 2012 Agribusiness Summit, the state attracted investment in the
Rubber Sub-sector for the development of the single largest Rubber
Plantation project in Nigeria in Sokponba in Orhiomwon LGA under a
privately developed and financed initiative;

A framework for
Local Economic Empowerment through out-growers schemes is being
finalised to attract funding into the development of key crops for which
Edo State has natural endowment including Oil Palm, Rubber, Cassava,
Cocoa, Rice and other grains

He was the founding secretary of a New York-based US
Africa Chamber of Commerce in 1992, which promoted US organisations
doing business in Africa. He was a Director in Junior Achievement of
Nigeria – the local affiliate of the worldwide Not for Profit
organisation which trains students to appreciate market economy values.

He
also participates actively and serves as Trustee, in the Dr. Jackson
Owen Obaseki Foundation, a family owned NGO which is involved in
providing free educational and health services to the less privileged. 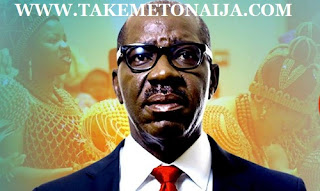