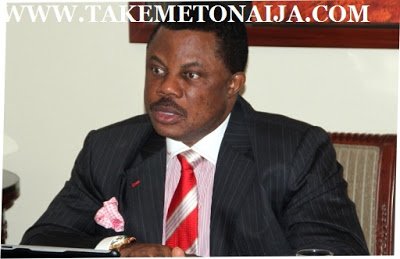 Chief Willie Obiano is a Nigerian banker, technocrat, politician and the fourth Democratic Governor of Anambra State. Assumed office in year 2014 and he’s been getting best ratings ever since.

Willie Obiano was born in the oil-bearing Aguleri town, in Anambra North Senatorial District to an educationist father and an entrepreneurial mother. A remarkable child, young Willie inherited both genes of his parents, eventually becoming an exemplary scholar and a successful banker and entrepreneur.

Willie’s father was a famous headmaster and disciplinarian who led the exemplary life a “bringer-of-light,” planting schools from Otuocha to Atani and inculcating the values of scholarship and hard-work in children from Umuoba Anam to Nsugbe. He was highly respected in his time for his uprightness, high integrity and great sense of community. He was a quintessential teacher who brought his children up in the strictest discipline. Young Willie’s mother on the other hand was highly enterprising and visionary. She was a hugely successful merchant who sold mangala in Otu-Onitsha market. Her friends respected her business acumen and her high sense of style and gregarious spirit. She was a socialite of sorts who carried herself well among her friends and admirers. Chief Willie took after her in his now famous sartorial tastes.

Following in the footsteps of his father, young Willie Obiano embraced early education. He started from the mission schools where he imbibed his early Christian values and preceded to the prestigious Christ the King’s College, Onitsha where he showed a remarkable academic promise and passed out as one of the best students in his time. He gained admission to the University of Lagos to study Accountancy and graduated with a Second Class Upper Division Honours.

Riding on the back of his impressive academic performance, Willie Obiano quickly got his first job with First Bank and subsequently joined the lucrative oil and gas industry as a staff of Texco International where he rapidly rose to become the company’s Chief Internal Auditor with extensive oversight functions on the internal processes of the company in Nigeria and overseas. After years of functioning at the top level in the oil and gas sector, Willie then moved his enormous expertise and exposure from that sector to Fidelity Bank Plc.

His arrival in Fidelity Bank marked a dramatic turn in the fortunes of the bank. As the Executive Director in charge of Business Banking, Chief Willie was the leader of the core banking business and effectively deployed his vast entrepreneurial mind to attracting quality risk assets and high end businesses to the bank. He also facilitated high profile partnerships and brokered paradigm-changing equity arrangements that firmly placed the bank on the global financial map. More importantly, Chief Willie managed the bank’s vast human and material resources with the dexterity of grandmaster in the game of chess, deploying talent and resources seamlessly to ensure a calculated expansion of the business and a healthy growth of the bottom line.

As an administrator, Obiano was almost flawless; deploying carrot and stick with great wisdom and tact – showing as much firmness as compassion as the circumstances demanded. As a leader, Obiano showed tremendous charisma and personal charm at Fidelity, attracting the young Turks and the best brains around him and mentoring them to a point of self-possession. His greatest joy was to see the people who passed through him rise through the ranks to top management positions, handling big responsibilities and contributing to the bottom-line.
Chief Willie was the life of the party. At the bank’s Annual General Meetings and Long Service Awards, his awesome presence and engaging charm gave the evenings the needed ceremonial air. He always stood out in the crowd, interspacing infectious humour with sharp anecdotes full of business wisdom. Last year, he retired gloriously from his position as Fidelity Bank’s second in command after almost 10 years of meritorious service.

Chief Willie also had extensive professional trainings in Harvard Business School and Stanford University both the USA. He has an MBA in Marketing from the University of Lagos. In the course of his career, Obiano attended numerous courses including Credit and Trade Services at Citi Bank, New York, Treasury and Money Market at Northwest London, Emerging Markets at FIM Bank, Malta and Managing Integration Process at Houston Texas, USA in 2006.

He left the Banking System to join the Nigerian politics and contested the November 16, 17 and 30 Anambra State gubernatorial elections on the platform of the All Progressives Grand Alliance, APGA.
In March 17, 2014, Willie Obiano became the governor of Anambra Sata, having successfully contested for the position under the platform of the All Progressive Grand Alliance (APGA). He succeeded Peter Obi as the governor of Anambra State.

One of the greatest qualities of Chief Willie Obiano is his philanthropic spirit and his willingness to help people in need. He is known to have secretly operated a Foundation that has offered scholarships to many people from Anambra North Senatorial district. [/b]He is also a pillar of the church who has made extensive donations and contributions to diverse development projects in the Catholic Church, the Anglican Church and some Pentecostal churches across Nigeria. Consequently, he has won many honours from the church including a recognition from the Catholic Diocese of Onitsha (2008), another from the Catholic Association for Communication, Nigeria (2011) and yet another from St Gerald Catholic Church Gbagada as the Grand Pillar of the Parish in 2010. Obiano was also honoured as the patron of St. Gerald’s Catholic Church, Gbagada Parish (2008) and Catholic Artists and Entertainers Association of Nigeria. He is a winner of the Role Model of the Year 2009 organized by the Maribet Consult and the Catholic Women Association of Nigeria as well as winner of the Career Excellence Award from the Awka Development Union in 2008.