Well, we’ve introduced a new category called facts and discovery. We are going to be showing you and telling you basic facts and knowledge we believe you might want to know. 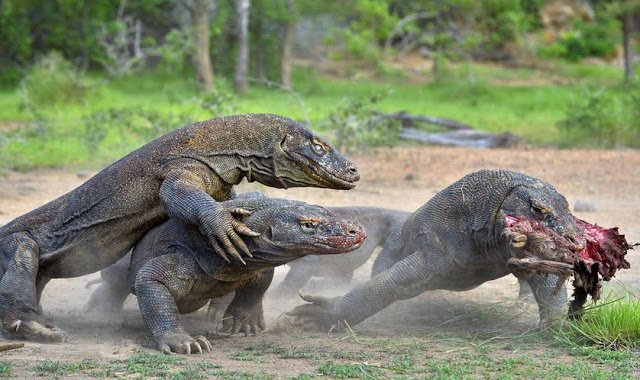 Popularly called Monitor Lizard in Nigeria, the Komodo Dragon is discovered to be the only largest living species of lizard originally from Australia, but also found in the Indonesian Islands of Komodo, Rinca, Flores, Gili Motang, and Padar.

The animals popularity as Komodo Dragon grew due to its peculiar larger than normal size – with a maximum length of 3 metres (10 ft) in rare cases and weighing up to approximately 70 kilogrammes (150 lb), for ones that dominate the Island in Indonesia. These innocent looking but ferocious reptiles are well adapted to hot, dry or aquatic habitat and typically lives in open grassland, savanna, scrubland and tropical forests at low elevations. With the powerful sharp claws and forelimbs, the Komodo dragons dig holes that can measure from 1 – 3 metres (3 – 10 feet) wide.

With the powerful sharp claws and forelimbs, the Komodo dragons dig holes that can measure from 1 – 3 metres (3 – 10 feet) wide.
Years of studying and research carried out on the scavenger beast shows that like snakes, they are one of the few venomous lizards on the planet.
According to Bryan Fry, a venom researcher at the University of Melbourne in Australia, who carried out the research said the dragon’s venom is poisonous enough to rapidly decreases blood pressure, expedites blood loss, and sends a victim into shock, rendering it too weak to fight.
They are known to hunt in packs using ambush strategy to take down preys. The ones as big as 8.5 feet long weighing as much as 200 pounds goes bigger meat, while smaller monitor lizards eat smaller preys.
Komodo dragons very fast creatures contrary to their lumbering and deceptive movement and can run rapidly in brief sprints up to 20 kilometres per hour (12.4 miles per hour).
Unfortunately, Komodo dragons are recorded to be responsible for the death of four people in the last 41 years.

One fascinating fact about this creature is its slow metabolism. As they are capable of swallowing down as much as 80 percent of their own body weight in food, their digestion process helps them survive on as little as one meal a month. They are also cannibalistic in nature – meaning they eat their young ones.
On reproduction, the Komodo dragon can reproduce sexually or asexually depending n their environmental conditions.

In situations where female live alone, research conducted on ones kept in the zoo showed that no male contributed to fertilisation of offsprings.
But in the case of sexual reproduction, mating is said to begins between May and August, and the eggs are laid in September. About 20 eggs are deposited in abandoned megapode nests or in a self-dug nesting hole.
Incubated for seven to eight months, the eggs hatching in April when insects are most plentiful. Young Komodo dragons are vulnerable and therefore dwell in trees, safe from predators and cannibalistic adults; take 8 to 9 years to mature, and are estimated to live up to 30 years.

This animal has been declared vulnerable by IUCN and are protected under Indonesian law – where the risk of attacking the creature is very rare since it can kill a human.
However, the reverse is the case in other countries. For instances, in some part of Nigeria, the Komodo dragon also known as Monitor lizard serves as meat, therefore are hunters catch.