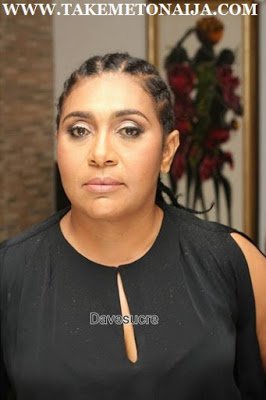 BIO AND PROFILE OF HILDA DOKUBO

Hilda Dokubo is a popular Nigerian film actress and youth advocate who once served as special adviser on youth affairs to Peter Odili, a former governor of Rivers State.

Hilda Dokubo was born as the first of six children in Buguma, a town in Asari-Toru, Rivers State where she went on to complete her primary and secondary school education at St Mary State School Aggrey Road and Government Girls Secondary School respectively. She is an alumna of the University of Port Harcourt where she earned her Bachelor and Master’s degrees in Theatre Arts.

She started acting when she was seven years old. “The journey has been fantastic,
I’ve lost count of the number of movies I have done” she says. Ironically, she was
not one of those who faced challenges because she started acting when she
was very young. By the time she was an adult, she was already a professional
actor because she had gone to school to study Theatre Arts. “It just came
naturally. The challenges I face these days are based on the roles I
play because each role comes differently. It has just been a beautiful
journey. Even though there are bumps everywhere, you just have to go
past them.” she said.

SHE SPEAKS ABOUT HER BACKGROUND BELOW:

“I was born with a silver spoon, but death turned me poverty-stricken after my father died when I was just nine. I turned away from God at that point, because I felt disappointed that despite how much my father loved and served God, he still died.” She continued, “After my dad died, my mother completely lost her mind. If she were living in the US, I’m sure she would have been diagnosed as a mental case. You know, in Nigeria, we don’t consider people mad until they have started eating from dustbins. I rebelled against God at that point, and I stopped going to church at the age of nine. Hilda Dokubo Hilda Dokubo “However, I was a very brilliant girl, and I got admission into the university at the age of 16. I became rascally and did what girls like that do. I slept with a man, and I became pregnant. It wasn’t the Holy-Spirit that impregnated me. My mom was devastated and disappointed in me because of that. I was also angry with her because ‘her God’ killed my father, and we stopped speaking to each other. One day, a man came to me and said he needed a barge. I didn’t know what it was, and he told me it was used to store oil. I then recalled that I had once seen a barge in the compound opposite ours. I went to the neighbour and told him I needed the barge. He asked me what I needed it for, but I told him not to worry. I told them to put the barge in front of my mother’s house. At that point, the man who told me he needed the barge came back, and dropped sacks of money containing N2m with my mom because I was in school at that time. Two weeks later, he returned with N500,000, and I was dumbfounded. Before then, I had never seen N100,000 together, but there I was as a millionaire at 17, not knowing what to do with the money.”

Dokubo made her screen debut during her youth service in a 1992 film titled Evil Passion. She has since been featured and has produced several Nigerian films. Upon starring in a supporting role in a 2015 film titled Stigma, Dokubo won Best Actress in a Supporting Role at the 11th Africa Movie Academy Awards

Popular actress, Hilda Dokubo hasn’t been in the public glare for a while now. Even before she served as a Special Adviser on Youth Affairs to former Rivers State Governor, Peter Odili, she had rarely been seen in movies. But that does not diminish her status as a widely-loved Nollywood actress.

She has featured in several block-buster movies over the years that have won her millions of fans. Of particular fascination is the emotional way she plays her role. She cries easily on camera, and she can be said to be a method-actor, as her portrayal is graphic and distinct.

Dokubo was one of the principal organisers of the thanksgiving
service of the Peoples Democratic Party (PDP), for the victory of
Governor Nyesom Wike, at the Supreme Court, which affirmed him as
validly elected governor of the oil-rich state?
Hilda seemed quite at
home and enjoying what she was doing.
Well, has Hilda kissed the screen bye for good?
“No,” she said, “I’m back. Though as a pro­ducer for now, I will soon
return

SHE SPEAKS ABOUT HER CAREER AND RETURNING TO THE SCREEN:

What have you been up to recently?
I just finished a movie by Kunle
Afolayan, and I’m working on another. I’m also writing a children’s
book, and running a school. I’m just staying happy and excited. Kunle
Afolayan’s The CEO is a beautiful work making waves at the
moment. I worked with an awesome team, and the storyline was so simple
but beautiful. I played the role of a superintendent of police who
investigated some crimes. It was fantastic working with Kunle Afolayan.
Are you working on a film of your own?
Yes, it is titled Asawana. It
is a story of the strength of the young, and the experience of the old.
It is a work that talks about collaboration and strength of women in
communities.
Why did you take a break from Nollywood?
Acting is like my second life. If you
say I left acting , it is like saying that I died. What happened was I
felt like giving back to the society that has loved me so much.  I chose
to go back to work with communities, see and feel like real people. I’m
not done doing community work, but this is my time to come back and
share those experiences in my work. I never left Nollywood, it was just a
small break which was worthwhile.
You went into politics at some point…
I wanted to do something different and I
wanted to give back to the society. I felt like my life was too
monotonous. I was never in politics, I just held a political office.
There is a huge difference between being a politician and holding a
political office.
Can you relate a bit of   your experience as a special adviser?
I am pleased with the little
contribution I made. I did my thing as it came. Working with Governor
Peter Odili, gave me a better understanding of government-related
issues. It was a good training. I learnt a lot about administration and
it gave me a platform to contribute to the development of young people.
Do you intend going back to politics anytime soon?
I really don’t know. If politics is what
I see now, I have no interest.  Nevertheless, if politics becomes a
tool to contribute to the development of my people, then my answer is
yes. I’m not sure I like what I see now.

Some seemingly Little things that wouldn’t matter to some people matters a lot to a good mother.

She gushed about his height in her caption which reads.

“I am so blessed. One more graduate. No be small thing o. If I hear fim about heights e?”