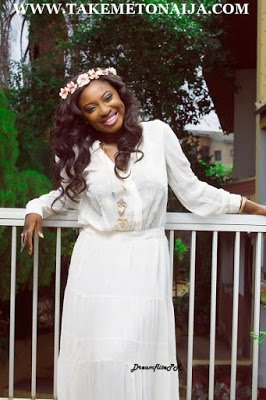 Yvonne Jegede is a popular Nigerian actress and producer, she rose to prominence after being featured in the Tuface music video African Queen.

Yvonne Jegede made her debut into Nollywood in 2004 when she acted in the movie ‘Missing Angel‘.
After her debut and starting to rise she had to leave Nigeria to study abroad before she returned into movie industry couple years ago.
Though she is very beautiful and wanting, Yvonne is well known for
displaying her endowment or should we say — voluptuous body as seen in
many of her photos.

Jegede is an actress and producer. She was introduced to acting by Charles Novia despite aspiring to be a model as a kid. She has acted in films such as Missing Angels and more recently Okafor’s Law. In 2015 she produced her first film 3 is Company.

In late 2016, Yvonne Jegede covered the Wedding edition for Genevieve magazine, wearing an Agatha Moreno wedding gown
JEGEDE SPEAKS MORE ABOUT HER LIFE BELOW:
How was the year 2016 for you generally?
Well, it wasn’t bad. We thank God and looking forward to a better 2017.
Although, the recession didn’t make it easy for us at all, but we are
strong soldiers, we will always overcome. This New Year has also been so
good so far. It is only by God’s grace.
Any plans to have your own movie soon?
Well, not yet, but I have been very busy working on other people’s
project. I have been on set, shooting here and there. So, plans are
underground for my own movies, pretty soon.

What is the most challenging role you have played in recent time?
There is this epic move I did in Asaba where the character I played lost
her husband and she had to go through mourning for years. I had to cry
literally half way through the film .It was emotionally challenging for
me. I had not cried that much in a long time. There were some scenes
that even after we finished shooting and I was still crying, but I had
to snap out of it in order to be able to act the next scene.
So how did you manage to do that, since you were very emotional?
As an actor, you have to be in control of yourself and always be ready
for any eventuality. I just did what I had to do and I was back to my
real self.
You’ll soon get married; will that limit the kind of roles you play in movies?
No! Why would it? My husband is also an actor, so he understands. He
knows the business, so I don’t have restrict myself from roles. Life has
been made easy for me.