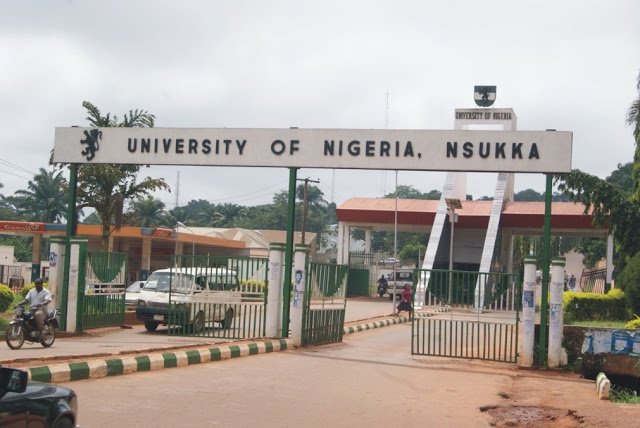 Nigeria
had her first university as far back as before independence, and since
then, the number of  universities has continued to grow in Nigeria. Now
its no longer the business of the government alone but also that
of private individuals. The motivation has always been to meet up  with
the ever-growing demands for advanced education in the country. So many
people, especially the youngsters who are yet to make choices of higher
institutions do not really know which is which. It will be very
beneficial if they get to know the first universities that were created
in this noble country of ours as its is always believed that they boast
the best educational facilities, resources, and reputation, even with
age. It
was the quest to establish a University in the Eastern part of Nigeria
that gave birth to the University of Nigeria. A law in support of this
quest was passed on the 18th of May, 1955, and on 7 October 1960, the
University was officially opened. Her Royal Highness, Princess Alexandra
of Kent, representing Her Majesty Queen Elizabeth II at the Nigerian
independence celebrations, performed the opening ceremonies and laid the
foundation stone of one of the University’s early buildings. The
University’s first Vice chancellor was Dr. George Marion Johnson, while
her current VC is now Professor Benjamin Chukwuma Ozumba. The University
of Nigeria (UNN) was the first full-fledged indigenous and first
autonomous university in Nigeria. It is still one of the best and most
sought-after Universities in Nigeria. Obafemi
Awolowo University which was founded in 1962 as the University of Ife
was the brainchild of Chief Obafemi Awolowo. It was renamed Obafemi
Awolowo University on 12th May, 1987. The decision to establish this
institution was in response to the agitations of the Westerners on the
need for a higher institution that will cater for the education of their
numerous secondary school leavers at that time. The cause of the
agitation was the plan of the then Ashby Commission to establish
additional Universities in the Northern and eastern Nigeria without
putting the west into consideration. On 8 June 1961, the Law providing
for the establishment of the Provisional council for the University was
passed by the Legislature of the Western Region and on the 26th of the
same month Provisional Council of the University was formally
inaugurated under the chairmanship of Chief Rotimi Williams. OAU is also
one of the highly recommended Universities in Nigeria. The School
of Arabic Studies in Kano was the starting point of the Ahmadu Bello
University. The school was upgraded by the Northern region to become the
Ahmadu Bello University for Arabic and Islamic Studies, named after the
region’s dominant political leader, Alhaji Sir Ahmadu Bello. This was
prior to the implementation of the plans in the Ashby Commission Report,
to create additional universities to meet the academic needs of the
country. However, the Ashby Commission report recommendations offered
better direction, and it was ultimately decided to create a University
of Northern Nigeria at Zaria (rather than Kano). The university took
over the facilities of the Nigerian College of Arts, Science and
Technology at Samaru just outside Zaria, and incorporated the Ahmadu
Bello College in Kano, the Agricultural Research Institute at Samaru,
the Institute of Administration at Zaria, and the Veterinary Research
Institute at Vom on the Jos Plateau. The law establishing the new
university was passed by the Northern Region legislature in 1961. It was
decided to name the university after Ahmadu Bello University. The 14th
and current Vice-Chacellor of OAU is Professor Ibrahim Garba. The
University of Maiduguri was created by the federal government in 1975,
as a division of the Third Development Plan which stressed the creation
of more universities in the country. It was the government’s intention
to make the institution one of the country’s principal higher-education
institutions. The University of  Maiduguri is located in the Borno State
in Nigeria and now boasts over 34 000 students from around the world.
Her current VC is Professor M. M. Daura. The
University of Calabar is one of Nigeria’s second generation
universities. The University was a campus of the University of Nigeria
until 1975. The male students are known as Malabites, while the female
students are Malabresses. The male hostel is called Malabo. This was as a
result of challenges faced by the students at a time which coincided
with the suffering experienced in Malabo by Nigerian deportees from
Equatorial Guinea (whose capital is Malabo) at the time. The University
of Calabar was one of the foremost Nigerian Universities to automate
students’ registration processes through the College Portal. The school
is located in Calabar city, the capital of Cross River state. What
became University of Jos was established in November 1971 as a
satellite campus of the University of Ibadan. The first students were
admitted in January 1972 as pre-degree students with the first Bachelor
of Arts degree program begun in October 1973. In October 1975, then
military government under General Murtala Mohammed, established the
Unijos as a separate institution. The first Vice-Chancellor of the
Unijos was Professor Gilbert Onuaguluchi. Classes began at the newly
reorganized University of Jos in October 1976 with 575 students spread
over the existing four faculties of Arts and Social Sciences, Education,
Natural Sciences and Medical Sciences. UniJos currently has about 30
000 students with Prof. Hayward B. Mafuyai being the current Vice
chancellor. The
University of Ilorin was initially a University College affiliated to
the oldest university in Nigeria in 1975 under the leadership of the
then principal, Dr T.N. Tamuno. But in 1975, the military government
which was in power then passed a decree that saw to the establishment of
the University. Subsequently, in October 1977, the institution attained
full autonomous status with appointment of the then Principal,
Professor O.O Akinkugbe as first vice chancellor. The immediate past
vice chancellor, Professor Is-haq Oloyede is the first Unilorin alumnus
to occupy that position. The staff and student populations now stand at
about 3,040 and 20,084 respectively. UniIlorin is one of the
Universities in Nigeria that top the list of best Nigerian Universities.