What would you do with $500 and a passion for tech and fashion?
Kelechi Anyadiegwu has an answer to this question: build a $2 million business. And she’s managed to do just that- in two years. 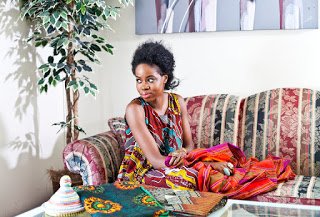 But it wasn’t always clear that the path Kelechi has taken would yield as much as it has. As a Nigerian in the United States, Kelechi had grown up with African wares and loved them as part of her heritage. She also remembers how her heart got stolen by the lures of technology after her father bought her a computer in the early 2000’s. Her interest narrowed in the years that followed, as she became more interested in the interaction of humans with technology, and how it affects the decisions they make. Anyadiegwu went on to bag a B.Sc in Media and Communication Technology from Michigan State University, and a Masters in Human-Computer Interaction from Carnegie Melon. However, it took two years and a journey through several job roles to discover that her passions could merge- and do so profitably.

Anyadiegwu finally found what she describes as the perfect match of her passion and career aspirations, after ‘noticing’ that she got compliments for the African-inspired clothes she wore. Instead of pointing enquirers to a store where they could get their own clothes, she decided to create one herself. In 2014, she founded Zuvaa, an online platform based in New York, which allows African fashion designers to showcase and sell their wares.

“I started Zuvaa to fill a void I saw in the African fashion industry, a place for affordable, ethically made, African pieces”, she explained in an interview with CNN in 2016. She says that although it was something of an exciting adventure for her, she went into it with a desire to use her skills in social media marketing and online community building, to create a platform that would provide more exposure for the talented African-inspired fashion designers from across the world.
Club Connect banner

Zuvaa may have grossed about $2 million in 2016, according to Anyadiegwu’s estimates. Her success has gotten recognition from significant quarters- she was named in Forbes’ list of 30 persons under the age of 30 years in retail and Ecommerce in the same year.

Zuvaa’s online marketplace has attracted designers of African pieces from Nigeria and the wider African continent, as well as from the other parts of the world. They’re able to display and sell their accessories on the platform to a much larger audience than they would have managed if they simply focused on their local markets. According to Anyadiegwu, Zuvaa has been received with excitement by designers who are pleased with being given the chance to reach the world with their works, and “make bold statements with bold prints” (as the Zuvaa site says it helps them to do).

It’s just the beginning for Anyadiegwu and her million-dollar online marketplace business- or so she says. Driven by the desire to create something big out of an unlikely dream, she now speaks enthusiastically about the need for young people to pursue their passion and not give up. She says her “biggest advice” to them is to trust their vision and run with it; she believes it’s what would make them stand out.