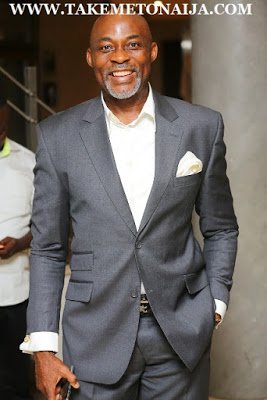 INTRODUCTION
Richard Mofe Damijo popularly known as RMD, is a Nigerian actor and politician. In 2005 he won the Africa Movie Academy Award for Best Actor in a Leading Role. He is a former Commissioner for Culture and Tourism in Delta State, Nigeria.

He took part in all dramas in school, especially the religious ones where he played Jesus or Peter and all that.  According to him In school, leadership was thrust upon him. In his secondary school, he was first a member of the dramatic society. He went to an all-boys school first and he started out playing female parts.

He had a lot of hair at the time and they thought he ooked feminine when he brushed his hair or when he let his hair grow and stuff like that, so it became a natural thing. When he got to form 4, he started doing a lot of martial arts and all of that so it looked just like a wonderful combination to combine martial arts and theatre.
See what he said in an interview below:
“And when it was time to fill my JAMB form, it was obvious. Everybody was like “Oh, you’re gonna do theatre arts”. That was the most natural thing to do and by the time I got to university, in my first year in university again, by some divine conspiracy leadership was thrust upon me. I remember the first departmental production where we were auditioned and all of that and the names for the parts came out the next day and I went to the notice board and I saw my name under the lead character, I ran straight to the Head of Department and said “I’m sorry, there’s a mistake. I’m a new student, but they put my name in the lead”. He said “no, you’ll play the lead”. I said but I just came in. I want to learn what… I thought acting was different in the university, but they made me realize whatever it is that I was doing then was what was needed. From my first production in school, I started playing leads. I guess I didn’t look back, as we say in Nigeria, I didn’t look back after that.
Same thing happened in Lagos. I came to Lagos…Ajo Productions was the theatre to work for and I got that… I went for the audition, I prepared and again, I got the lead character in that one. It’s just been… I guess when you’re humble that way, you can’t help but see some kind of divine movement in how things happened.”

After graduating from the university, Mofe-Damijo took part in a television soap opera in the late 80’s called Ripples. Before then, he had a stint with Concord Newspapers and Metro Magazine as a reporter. Out of Bounds was the first film for which he received a writer/producer credit. In 2005 at the maiden edition of the African Movie Academy Awards Mofe-Damijo won the award for Best Actor in a Leading Role

Mofe-Damijo was the commissioner for Culture and Tourism in Delta State, Nigeria.
RMD was married to one of the foremost Nigerian Journalists, late May Ellen Ezekiel, who was popularly known as MEE and they had one child. She died in the year 1996. Richard however got married again. He has a total of five children; four from his current marriage.