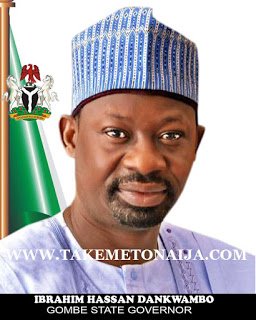 Ibrahim Hassan Dankwambo is the governor of Gombe state as of 2015 after winning his rerun election.

Dankwambo is a graduate of Accounting with second Class Upper
Division from the prestigious Ahmadu Bello University, Zaria between
1981 – 1985, he later obtained a Masters of Science Degree in Economics
from University of Lagos, Nigeria and post Graduate Diploma in Computer
Science in Delta State University, Abraka.
Today, he is a Fellow and
Associate of Six professional bodies and associations which include:
Fellow, Institute of Chartered Accountant of Nigeria (FCA);
Associate, Nigeria Institute of Managements(ANIM);
Fellow, Chartered Institute of Taxation of Nigeria (FCTI);
Member, Nigeria Economic Society (MNES);
Fellow, Chartered Institute of Bankers of Nigeria (FCIB); and
Fellow, Nigeria Institute of Marketers (FNIM).
Dankwambo’s working career spans across both private and public sector.
He started his working career as Coopers and Lybrand International
(Chartered Accountants) now Price |Water House Coopers between 1985 –
1988. He later joined the Central Bank of Nigeria in 1988 till 1999 when
he was appointed the Accountant–General of Gombe State. His excellent
performance is his career progression, attracted him to the Federal
Government in its search for a worthy successor to the then Accountant –
General of the Federation, who retired in April, 2005. Thus, he was
appointed Accountant – General of the Federation on 20th April, 2005.
The position he has held till now.

Dankwambo is an
outstanding example of excellence. In his quest for knowledge, he
attended six International courses in different countries which
included:
Harvard University, Boston Massachusetts, USA where he
attended a course on Global Financial Systems, Crisis Prospects and
Solution.
Stanford University, Stanford Business School for a
course on Budgeting and Financial Management in the Public Sector just
to mention a few.
Dankwambo has also served in fourteen very sensitive committees which included the following:
Protem Executive Secretary; Forum of Accountant – General and Auditor – General in West Africa (FAAGWA).
Chairman Review of Financial Regulations and other Financial law in Gombe State.
Co-Chairman – Standardization of Federal, State and Local Government accounts in Nigeria.

Sub – chairman Review of Syllabus for Bank Examiners Training.
As
the Accountant – General of the Federation, he has introduced landmark
programs towards ensuring accountability, transparency and probity.
Amongst them are:
He embarked on massive re- organization of the
Office to make it more focused, pragmatic and professionally suitable
for efficient service delivery.

As a Governor, Dankwambo lost his deputy Mr. David Miyims Albashi,who
died on 4 November 2011 in a German hospital of injuries he sustained
in a car crash on August 28 on November 4, 2011. On the 17 December 2011
Alhaji Dankwambo appointed Mr. Tha’anda Rubainu as current Deputy
Governor.

In the 2015 Governorship elections he was again re-elected as the
Governor under the platform of the Peoples Democratic Party.(PDP), being the only PDP governor in the North.
He was later dragged to tribunal later same year but the supreme court upheld his election.