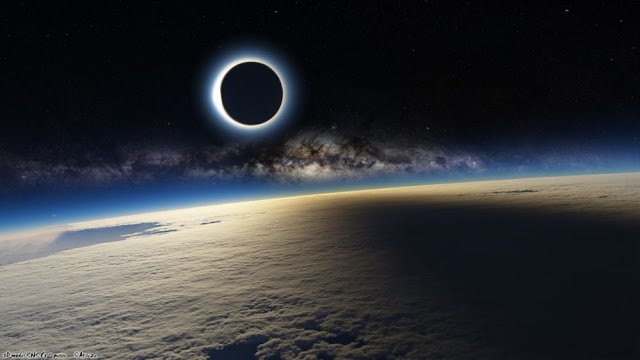 Nigeria is set to experience an annular eclipse that will be visible all over the country with different degrees of totality on September 1, 2016.

An eclipse is an astronomical event which takes place when an astronomical object like the sun or moon, is temporarily obscured, either by passing into the shadow of another planet, sun or the moon or by having another body pass between it and the viewer.

The term eclipse is most often used to describe either a solar eclipse, when the Moon’s shadow crosses the Earth’s surface, or a lunar eclipse, when the Moon moves into the Earth’s shadow.
An annular eclipse happens when the Moon covers the Sun’s center, leaving the Sun’s visible outer edges to form a “ring of fire” or annulus around the Moon.
See Also: Wonders Of Science! Three-Parent Babies Almost A Reality
According to the National Space Research and Development Agency (NASRDA), the highest degree of obscurity in Nigeria during this natural occurrence will be in the southern part of the country particularly in Lagos where it is expected to have 80 per cent obscurity while the lowest degree of obscurity will be about 45 per cent and this will be observed in the northern part of the country, particularly in Sokoto.

In a statement issued yesterday head of Media and Corporate Communications of NASRDA, Dr. Felix Ale, said the annular solar eclipse would be observed as a partial or near total eclipse across the country with Abuja the Federal Capital Territory expected to be about 60 per cent.
His words:

“The annular eclipse is expected to occur between 7:15 a.m. and 10:03 a.m. with slight variations in actual timing across the country.
“In Lagos, the first contact will occur about 7:15 a.m. while the maximum eclipse will occur around 8:30 a.m. and will end by 10:03 a.m.
“The eclipse is expected to commence in Abuja around 7:17 a.m., with maximum eclipse to be recorded about 8:32 a.m. and the eclipse will end around 10:00 a.m.”
Mr. Felix further reminded Nigerians that the eclipse has not be seen as a spiritual phenomenon but a natural happening that can be predicted by science with precision, hence, as part of its mandate, NASRDA has developed the capacity to accurately make this prediction.
See Again: Cockroach Milk Highly Nutritious And Good For You – Scientists
He went on to inform that the Space Agency has also put in place a viewing centre at her headquarters in Abuja with the provision of proper eclipse viewing apparatus for school children to observe the annular eclipse as part of its continuous efforts to expose Nigerians, especially students to matters concerning astronomical environment.

The agency nevertheless, warned that people who observe the eclipse with their naked eyes, run the risk of damaging their eyes permanently, as the obstruction does not reduce the luminosity of the sun. Ale said:
“An annular eclipse occurs when the sun and moon are exactly in line, but the apparent size of the moon is smaller than that of the sun. Hence the sun appears as a very bright ring or annulus surrounding the dark disk of the moon.”