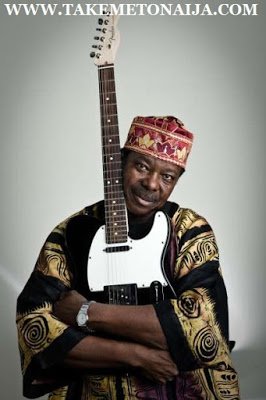 Sunny Ade is a Nigerian singer-songwriter, multi-instrumentalist, dancer, and a pioneer of modern world music. He has been classed by many as one of the most influential musicians of all time. Sunny Ade rose to stardom in 1960s and reigned for quite a longtime. He is popularly known as the “King Of Juju Music”

Sunny Adé was born into a Nigerian royal family of Ondo, the reason he is known as an Omoba among the Yoruba people. Sunny’s father was an organist in the Church, while his mother was a trader. Sunny Adé attended a grammar school in Ondo. When he left the grammar school, he moved to Lagos, where he ventured into music career.

Sunny Adé’s musical sound has evolved from the early days. His career began with Moses Olaiya’s Federal Rhythm Dandies, a highlife band. He left to form a new band, The Green Spots, in 1967. Over the years, for various reasons ranging from changes in his music to business concerns, Sunny Adé’s band changed its name several times, first to African Beats and then to Golden Mercury.
Stage performances

In the 1970s and 1980s Adé embarked on a tour of America and Europe. His stage act was characterised by dexterous dancing steps and mastery of the guitar.

After more than a decade of resounding success in his native Nigeria, Adé was received to great acclaim in Europe and North America in 1982. The global release of Juju Music and its accompanying tour was “almost unanimously embraced by critics (if not consumers) everywhere”. Adé was described in The New York Times’ as “one of the world’s great band leaders”, in Record as “a breath of fresh air, a positive vibration we will feel for some time to come” and in Trouser Press as “one of the most captivating and important musical artists anywhere in the world”.

His next album, Syncro System (1983), was equally successful and earned him his first Grammy Award nomination in the folk/ethnic music category.
A fusion of sounds

Sunny Adé’s music is characterised by, among other instruments, the talking drum – an instrument indigenous to his Yoruba roots, the guitar and his peculiar application to jùjú music, that would easily put him in the same class as guitar musicians like Santana. His music is in the age-old tradition of singing poetic lyrics (“ewi” in Yoruba) and praise of dignitaries as well components of Juju (traditional African belief) called the Ogede (casting a spell). Hence, Adé’s music constitutes a record of the oral tradition of his people for posterity.

Sunny Adé introduced the pedal steel guitar to Nigerian pop music. He introduced the use of synthesizers, clavinet, vibraphone, tenor guitar into the jùjú music repertoire such as dub and wah-wah guitar licks. Adé said he used these instruments not as an attempt to innovate, but as a substitute for traditional jùjú instruments which were too difficult to find and/or impractical for touring. The pedal steel guitar, for instance, was added to his repertoire as a sound-alike for an African violin.
Island records

In the mid-1960s Ade abandoned highlife for juju, a related musical genre that arose in Nigeria in the 1920s as an expression of the urban Yoruba working class. He assembled his own juju band, the Green Spots, which he later renamed the African Beats, reflecting the re-Africanization of the genre that had been occurring since the early 1950s in conjunction with a growing sense of nationalism.

Prior to Ade’s formation of the African Beats, one of his most notable predecessors, I.K. Dairo, had already modified juju through incorporation of Yoruba “talking” drums—which replicate the tones of Yoruba language—and through extensive use of the call-and-response vocal structure that is typical of the traditional music of many sub-Saharan African peoples, including the Yoruba. Upon this musical foundation, Ade laid a tapestry of guitar voices infused with the rhythmic and melodic colours of rock and roll. Ade’s early albums with the African Beats, most notably Sound Vibration (1977) and The Royal Sound (1979), were tremendously successful, and, when the press declared Ade the King of Juju in 1977, the title became integral to his professional persona.

After the death of Bob Marley, Island Records began looking for another third world artist to put on its contract, while Fela Kuti had just been signed by Arista Records. Producer Martin Meissonnier introduced King Sunny Adé to Chris Blackwell, leading to the release of Juju Music in 1982. Robert Palmer claims to have brought King Sunny Adé to Island’s attention, his familiarity being from his life on Malta in the 60s listening to African Radio and Armed Forces Radio. Adé gained a wide following with this album and was soon billed as “the African Bob Marley”.

Sunny Adé has said that his refusal to allow Island to meddle with his compositions and over-Europeanise and Americanise his music were the reasons why Island then decided to look elsewhere.
Collaborations

Sunny has collaborated with major artists such as Manu Dibango (Wakafrika) and Stevie Wonder (played harmonica in Aura), as well as younger Nigerian artists such as Wasiu Alabi Pasuma and Bola Abimbola.
Sunny Adé’s brief recordings with Island Records opened the floodgates for other world music artists like Senegalese Youssou N’Dour, Mali’s Salif Keita and many others.

In 1987, Sunny Adé returned to the international spotlight when Rykodisc released a live concert he did in Seattle and was given an astonishing embrace by fans across the globe who were eager for another international album release.

He soon employed an American manager, Andrew Frankel, who negotiated another three album record deal with the Mesa record label (a division of Paradise Group) in America. One of these albums was 1988’s Odu, a collection of traditional Yoruba songs, for which he was nominated for the second Grammy Award and thus making him the first African to be nominated twice for a Grammy. Apart from being an international musician Sunny Adé is also prominent in his native Nigeria, running multiple companies in several industries, creating a non-profit organisation called the King Sunny Adé Foundation, and working with the Musical Copyright Society of Nigeria.

In recent times, hip hop music appears to be holding sway with the electronic media in Nigeria with massive airplays. Nonetheless, Sunny Adé’s musical output has continued to inspire a vast generation of other Nigerian musicians, who believe in the big band musical set up which Sunny Adé and late Fela Kuti are noted for. The musician Lagbaja is one of the very many musicians whom Sunny Adé’s music has inspired. In 2008, his contributions to world music was recognised; as he was given an award for his outstanding contribution to world music at the International Reggae and World Music Awards held at the Apollo Theater in Harlem, New York.

In the 1980s Adé embarked on a career in Hollywood. His music was featured in the 1983 film Breathless, starring Richard Gere, and the 1986 comedy One More Saturday Night, and he acted in Robert Altman’s 1987 comedy O.C. and Stiggs.

At the beginning of another round of tour of the United States and Canada, Sunny Adé, now known as The Chairman in his home country, was appointed a visiting professor of music at the Obafemi Awolowo University Ile-Ife. In July the same year King Sunny Adé was inducted into the Afropop Hall of Fame, at the Brooklyn African Festival in the United States. He dedicated the award to the recently deceased Michael Jackson.

In november 2015 the court awarded Sunny Ade and his band the sum of N500milion for thei copyright.
Thirty years after he instituted a suit against African Songs and its subsidiary, Take Your Choice Stores, Juju maestro King Sunny Ade has been awarded a whopping N500million as damages, for infringing on his works with additional cost of N3million for prosecuting the suit.

According to a statement of claim filed before the court by a Lagos lawyer Chief Felix Fagbohungbe,SAN, in 1975, a contract dispute arose between King Suny Ade and the two companies culminating in a judgement delivered by Justice Dosunmu of a Lagos High Court.

Joined as co-defendants are; Lati Alagbada,Record manufacturing Nigeria Limited, Ibukunola Printers, Alhaja Awawu Ade Amodu and M.O. Alagbada, who he alleged have been using the master tapes to produce inferior qualities of his musical works and sell them to members of the public thereby depriving him of his means of livelihood.
King Sunny Ade and his band play
He contended that he was the author,composer,and producer of all the musical works numbering about 22.

He therefore demanded for damages in the sum of N1 Billion jointly and severally and prayed the court to order the two companies to return to him his master tapes as well as restraining the defendants from infringing on his musical works.
In a defence and counter claim filed by the two companies,they claimed that since Sunny Ade has been paid royalties by the companies he cannot lay claim to the tapes again.

According to them, the contract he signed with the two companies does not include returning of the master tapes to him. Consequently, they urged the court to award N5million against Suny Ade and in their favour.
King Sunny Ade play

The judge also ordered that the master tapes should be returned to Sunny Ade since it has been proved beyond reasonable doubt that he is the owner of the copyright.
The claim against other defendants were struck out on the ground that not enough evidence were adduced against them.
Based on the application made by Barrister Yomi Adeniran from the law firm of Felix Fagbohungbe SAN asking for a sum of N5million as cost of prosecuting this case as Sunny Ade have always been coming to court whenever the case was coming up,Justice Tsoho awarded N3million cost against the two companies.

The popular musician recently made it known that he doesn’t even know how many children he has but has decided to stop having them. This is evident, because all these ‘official’ wives have children for the Ondo-state royal blood. Share on Facebook Share on Twitter sunny_king Share on Facebook Share on Twitter KingSunnyAde-stargist With insinuations that he has other wives who can be referred to as ‘unofficial’, the internationally relevant musician whose real names are Sunday Adeniyi can be said to still be in the age-long culture of polygamy.