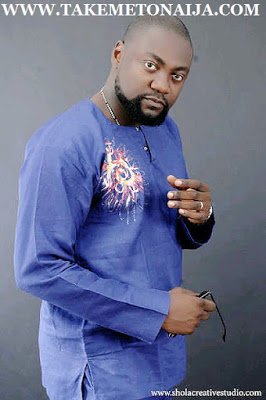 Yemi Blaq is a Nigerian actor who came into industry in 2005, he has featured in over 250 movies which shows how hardworking he is. He is one of the most famous in Nollywood, He is also a hardworking movie producer.

Yemi Blaq was born and raised in a family of four siblings in Ondo state Nigeria.. They are all artistically inclined. He grew up knowing he was going to go into the arts.

He revealed: right from his primary school days he got a lot of encouragement and support. After he played the role of ‘Incorruptible Judge’ his teacher came home and said to his mum, ‘oh this one is going to become an actor. Since then he has nurtured it up.

Speaking On His Parents Support:

My parents are quite different. My mum loved the idea. Sometime after my primary school experience when I was in Form 1 there was a school play we toured with and went to show at the town hall. I remember the look in my teacher’s eyes as she told my mum, ‘look this is what this boy is supposed to do’.
At that stage one is still confused as to what he wants to do. But I remember that my mum liked it. Maybe because she also used to act in school plays and she had lead roles as queen or princess.
My father is a very liberal person who believes one should be happy regardless what profession one settled into. He never tried to model us into a reflection of what he thought we should but rather supported and encouraged us to be what we wanted to be.
One or two of my siblings had reservations but all that is gone considering how much I have achieved.

In his words:
I always wanted to act, I always love acting. I used to act back in school days. I studied theatre arts in school. I travelled and after I came back I joined AGN (Actors Guild of Nigeria) in the year 2005

Yemi believes he was one of the lucky ones because he got into the industry when everyone said it was a bit tough. He was in it for about five or six months auditioning for roles, going to the National Theatre, talking to people. Then he ran into a really large audition which turned out to be a grand encounter.
The first couple of days he didn’t get any chance then the third day someone walked up to him and said, ‘you, where have you been’? And he said he’s been here all day they got into an argument about that until he told him what he wore on the previous days. Then the man said to him he had given the role to Desmond’, but would get him other projects. He asked him to read some more which he did. In the end he got the lead role. It was in the movie, ‘Lost to lust’.
Speaking on first experience on set:
My first experience on set was with Obi Osotule and Mathias Agbo in
Benin city. They were shooting this movie The unseen eyes and I had gone
there to just flex my acting muscles. I got on set with the rest of the
people who came for the audition and we started reading.
Immediately I got in there they called me Steve and I said but my name
is not Steve, I’m Yemi Blaq and they said, no you are not Yemi Blaq. I
got quiet worried because I didn’t get where the whole Steve thing was
coming from. I later got to know Steve was a character I really looked
like in their mind. To cut the story short. I read the script and at the
end of the day, I played the character. I was supposed to be paid
N2,000 but I guess that is bad debt now. So that is the story of my
first time on set, it was a great time, I shot it with Ini Edo, and
Emeka Enyiocha. It was a great experience.

Lost to lust was the movie that gave him a breakthrough, it was his first lead role movie with Mercy Johnson. “It came out successful and since then every director and producer want me to work for them. Because in the industry if you are good, people tend to utilize your talent, look for you.” He says.

After his breakthrough with “Lost to lust” he revealed dorectors and filmmakers were calling upon him to feature in movies.. The actor said he’s featured in over 250 movies since starting career. He features in Nollywood movies in Yoruba movies too even though the perscentage of the Yoruba movies he’s featured in is very low..

Speaking about his wife and family:
Who is your wife?
My wife is Remi Ibinola Olatunji Blaq. To me, she’s the best writer in Nollywood. I’m not saying this with any sense of exaggeration. In prose, poetry, script – she’s amazing. We’re coming together to make sure we take Nollywood by storm.
What is the basis of your assertion that your wife is a good writer?
My wife wrote ‘The Distance Between’. You can look it up in the archives and it was directed by Izu Ojukwu. It starred myself, Rita Dominic, Mercy Johnson and Kalu Ikeagwu. It was shot in 2007, amazing piece of work. She’s written works like ‘The Hunting’ for which I won an award in Ireland in 2009 or thereabout. She also has a blogspot. It’s not a statement founded on conjecture or emotional attachment. It’s a statement of fact based on antecedents.

In a recent chat, with Saturday Beats, the father of one who is not known for scandals told the media that he could not hold back tears the first day he carried his baby boy.

“One of the happiest days of my life was when my son came to this world. It was a beautiful experience and I actually cried when he was delivered and I was asked to carry him.”

Though he is married, the actor said marriage has not changed the way he relates with female fans.

”I’m still the same person despite marriage; I am just more careful because I am not the only one my actions affect now; it affects other people. I see my wife as my friend and I care about her a lot.

I don’t think being married should affect your followership as people like you for your talent. There might be some people who will stop relating with you once you are married, but they are in the minority.”

SPEAKING ON RELATIONSHIP WITH JULIET IBRAHIM

You have a very close relationship with Juliet Ibrahim, how does your wife react to that?
She’s okay with it. My wife is a professional through and through. When we were shooting ‘The Distance Between’, my wife wrote the script. She wrote my character to have a romantic relationship with both Rita Dominic and Mercy Johnson. She was on set while we were shooting and after doing a kissing scene with Mercy Johnson, my wife called me aside and said “That kiss is not real. You need to make it real”. She knows that as long as I’m on set, it’s my job and I’m doing the kissing not because I’m enjoying a kiss from a woman, but because it’s the character doing the kissing, not me. If I kiss a girl outside the set, I’ll have a lot of questions to answer. She knows about me and Juliet.


The prolific actor have many times revealed he has the talent of singing and as of 2016, he’s revealed he is going to storm the music industry.

He’s won several awards in the industry a few which includes; AMVCA,NEA,CITY PEOPLE and more…

Signed a 40million naira endorsement deal with Gulder in 2015.

The actor is sure a very controversial one; he’s been involved in many relationship rumors with co-actors.