Hello guys, its your favourite TIN Magazine writer Akinola and if you are a music lover or artist you should checkout the article below, its me talking about PHYNO’s CONNECT song. 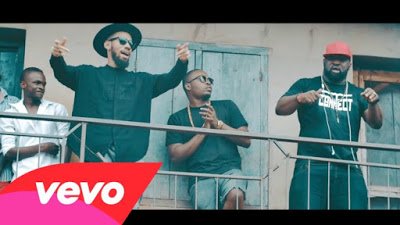 So, many Nigerian rappers last year tried crossing to the
singing zone starting from Olamide and the rest, but actually only few of them
did well and among the few is Baba Igbo, Phyno.

I tuned on to TraceUrban channel 325 on DSTV late November
2015 and guess what?? Trace was showing my favorite jam Adele’s HELLO music
video, after the end of the video I was about switching to HIPTV when I saw
“CONNECT” on the screen I was like; “Wetin
be connect again Phyno??” And immediately I remembered someone on my Facebook
TL was talking about one Connect song by phyno few days before, and I was like
“let me check this one out for a minute
sha…”
After watching the video for about a minute I was like “The
hell?? Phyno haven’t rapped?” I was seriously feeling the rhythm and the few
Brokin and English I could understand in the song and most especially the heavy
cool beat cooked by T-SPICE was turning me on like torchlight and the video
itself is so “doppy!” I didn’t finish the video before I went online searching
the song and I realized it’s been released since October, didn’t know, “Not a
big fan of Phyno ”.  I immediately went
on MTNmusicplus to buy the song because I loved it, well, that’s what I do when
I hear songs on radio or somewhere that I really love its sound.
After downloading the song It was on my repeat for about
5times before I finally decided to look up the lyrics and translation online..
After getting the lyrics and meaning online I became much more obsessed with
the song because it made a lotta sense to me. Even though I still don’t  understand some words in the song  but I can proudly tell you by now I have
learnt some new Igbo slangs via Phyno’s Connect that I’m really digging right
now, as a matter of fact I used a couple words from the song in a song I
recently wrote.
So what am I saying in essence?? Any sensible music lover
would know Phyno’s connect is among if not the best Hip Hop song sang in Igbo
language in a very longtime. It has a sensible meaning, it’s not someone
shouting “I am crazy, “I want to do Rihanna” and shi*ts like that. I think our
Igbo musicians should start using the Igbo language a lot more in their music
but when using it they should make sure it is a song with good rhythm and
lyrics, I think via that way even many artists from other tribes will use
Igbo language a lot more in their music and they will become hits.
Let’s take a look at Frank Edwards, Dude introduced us to
some Igbo language via his good music and now lotta gospel artists are using
these words in their music.
It is quite obvious the two most influential languages in
our music industry at the moment are; Pidgin English and Yoruba language, these
two languages are often used by many Nigerian artists of different tribes to make
nationwide hits so I believe we can expand this via making more good music with
our dialects.
So in conclusion I think we all should try making more good
music with our dialects!!!
Follow Akinola On Twitter Here