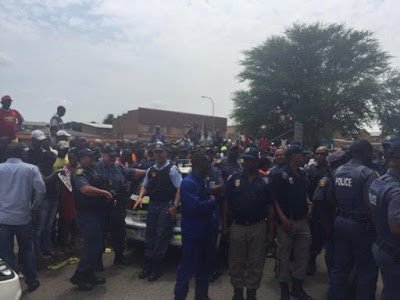 =>  Ngige Tells Buhari What He Must Do About Biafra-Naij.com

Nigeria’s minister of Labour and Employment, Senator Chris
Ngige has finally opened up on the protests by the Indigenous People Of
Biafra (IPOB) for a sovereign state.

The former governor of Anambra state, who spoke with Naij.com in
Alor, venue of his late father’s funeral ceremony, insisted that there
is nothing like Biafra.

According to him, the protesters are only a group of discontented
people, a situation which is not peculiar to the eastern part of the
country where they are domiciled.
He said, therefore, that there is really no need for Nigerians to
panic about their presence or activities as they would be handled the
same way others were dealt with by the federal government.

“Biafra? What do you mean by Biafra?” he retorted rhetorically when asked about the struggle by the protesters.

“There is no struggle anywhere. There is even no agitation. It is just discontent.”

Senator Chris Ngige during the condolence visit to his residence on Saturday, January, 2016. Photo: Emmanuel Osodi.

“So, it is discontent. The people who say they are doing Biafra
agitation are the same thing and they will be handled the same way
others have been handled. Dialogue!” the former Senator quickly added.
WATCH VIDEO AND READ FULL NEWS….

The Minister of Communications, Mr. Adebayo Shittu, has said that the
Federal Government will create two million jobs from the Information and
Communication Technology (ICT) sector.  He said investors from China
would be investing 15 billion dollars in the sector.
He spoke at
the maiden Nigeria Communications retreat organized by the Federal
Ministry of Communications, at International Institute for Tropical
Agriculture (IITA), Ibadan on Friday.
He said: “Information and
Communication Technology today creates more jobs than oil and gas and
that can further be enjoyed, as investors from China would be investing
N15 billion dollars in the ICT sector in Nigeria. So, potential two
million jobs will be made available through investments in the sector,”
he said.
READ FULL NEWS….

=> Funds Looted From Nigeria In Last 5 Years Can Service 3 Annual Budgets – EFCC – Nigerianmonitor
The Chairman of the Economic and Financial Crimes Commission (EFCC),
Ibrahim Magu, has said that the funds looted from Nigeria in the last
five years is enough to fund three years budget of the country.
He stated this yesterday during an informal meeting with Nobel laureate Wole Soyinka in Ikeja, Lagos State.
Magu used the occasion of the meeting to discuss his plans for a renewed clampdown on corrupt officials in Nigeria.
Earlier
at the meeting, Mr. Soyinka bantered with the EFCC chairman, at one
point wishing him “good luck, but not that other one.”READ FULL NEWS 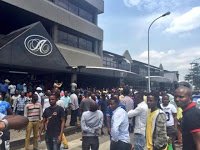 A group of angry Nigerians gathered near the Arwyp hospital in Kempton
Park, Johannesburg today to protest against police brutality after a
policeman allegedly suffocated a Nigerian. But officials told reporters
that the man died after swallowing what is thought to be
drugs. Police officers rushed him to the health facility in an attempt
to save his life. Details later…SOURCE

Naira devaluation talk grows stronger as Nigeria also adopts Chinese-type circuit breaker
Nigeria plans to create a $25 billion fund with public and private financing to modernize infrastructure and avoid a recession.
Copying Venezuela’s exchange rate policy and China’s failed equity market strategy might seen the height of foolishness.
But,
at least in the opinion of John Ashbourne, Africa economist at Capital
Economics, that is precisely what Nigeria, the continent’s largest
economy, has just done.
“Low oil prices are battering Nigeria’s
export-dependent economy, but it’s the government’s market-distorting
response that risks pushing the country into a Venezuela-style crisis,”
Mr Ashbourne says.
“Nigeria is sliding towards a Venezuela-style FX
regime and adopting a Chinese-style stock market circuit breaker.
Neither will reassure foreign investors, many of whom seem to be eyeing
the exits.”

The Federal Government has launched a
special military operation code-named operation AWATSU against pipeline
vandals in the country.
The operatives of the special task force
have also arrested 25 members of the gang of vandals operating at the
Arepo in Ogun State and parts of Lagos State.
The Acting Director, Defence Information, Brig.-Gen. Rabe Abubakar, who stated this in an exclusive interview with Saturday PUNCH, said that the operatives also seized 50 vehicles belonging to the vandals in the ongoing operation in Lagos.

President Muhammadu Buhari has expressed concern over low ranking of the
country’s universities. The president expressed the concern on Saturday
in Bauchi at the 19th to 22nd convocation ceremony of Abubakar Tafawa
Balewa University, Bauchi.
Represented by Prof. Julius Okojie, Executive Secretary, National
Universities Commission, he said that “it is worrisome that no Nigerian
university is quoted among the top 100 universities in the world.

“We rank below a thousand, if we do not aspire to be among the world
class universities, we cannot boast of robust system capable of making
the country among the top economies of the world. “We have abundance of
talents who excel elsewhere but appear incapacitated at home.

This is unacceptable. “Whatever makes our abundant talents fail at
home and excel abroad must be identified and neutralised for our benefit
and that of our future generation,’’ Buhari said. He blamed incessant
strikes by teachers as “major bottlenecks to progress of the country’s
university system’’. “The repercussions of strike usually retard the
smooth running of academic activities with heavy negative
consequences’’.
READ FULL NEWS….

=> 15-Year-Old Caught Having Sex With Sheep In Nnewi, Anambra – Authorityngr

“I have never had sex with human being in my life except sheep because it’s sweet”
Sheep owner wanted boy to buy his sheep and marry as ‘wife’
Master
Miracle Oluebube Nweke is a 15- year old boy and member of Assemblies
of God Church in Nnewichi-Nnewi. But he is a self-confessed deviant who
enjoys having sex only with sheep. He was recently caught in the act,
last Mon­day, by a friend who raised the alarm leading to his arrest and
confession of his past escapades. Our Correspondent, Isaac Ojo, was at
the scene where Master Miracle made his confessions and why he is
engaged in zoophilia and bestiality. Enjoy!
Although, chapter
18, verse 23 of the Book of Leviticus commands thus: “And you shall not
lie with any beast and defile your­self with it, neither shall any woman
give herself to a beast to lie with it,” Master Miracle Oluebube Nweke,
a 15-year old Christian is not bothered by such ordinance. At his age,
he has not only been copulat­ing but strangely so with ani­mals which
must be sheep.

The army has reported that about seventy Boko Haram terrorists
have been killed in several clashes with Nigerian troops in the
northeastern region of the country.
According to a report by Major General Lucky Irabor,  the deputy
theatre commander of Operation Lafiya Dole, the army says 70 insurgents
and four officers have been killed in different encounters.

According to a source from the presidency, some of President Buhari’s aides are concerned about his health.

The aides are of the thought that the president’s frequent travels might be taking a toll on his wellbeing.

A sources informs that the president’s personal physician, Dr Suhayb
Sanusi Rafindadi, now stands very close to him during and after public
events on foreign and sometimes domestic trips.

It is also gathered that Buhari’s chief security officer, Abdulkarim
Dauda, travels two days ahead of the president in order to spend two
days in hotel rooms where Mr. Buhari is expected to sleep. “It is a precautionary measure,” said the source.
”READ FULL NEWS….

=> Nigeria Ranks 57 In Best Countries Compilation – Naij.com
Nigeria has been ranked the 57th best country in the world according to the inaugural “Best Countries” ranking.

The report ranks the 60 best countries in the world by considering 75
factors such as sustainability, adventure, cultural influence,
entrepreneurship and economic influence.

Mortimer B. Zuckerman, the chairman and editor-in-chief of U.S. News
said the ranking would help citizens and business leaders to have a
better knowledge of the competitive business world.
The countries that made the top ten ranking are:

The highest ranked country in Africa is South Africa in 31 position
followed by Morocco in 35, Egypt in 39, Tunisia in 47, Nigeria in 57 and
Algeria rounding off the ranking at 60.READ FULL NEWS….