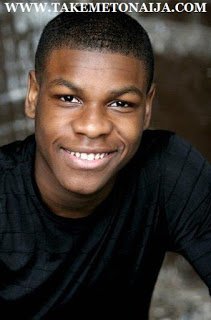 INTRODUCTION
John Boyega is a Nigerian British actor, best known for playing the lead role in 2011’s Attack the Block and for playing Finn in 2015’s Star Wars: The Force Awakens, which has brought him international recognition. He was first known to Nigerians after showing in the 2013 star movie Half Of A Yellow Sun. It can be said that Boyega respects his Nigerian descent as he mentions and talks about it often.

Boyega was born in Peckham, London, to Nigerian parents, Abigail and Samson. His first role was a leopard in a play at his primary school at the age of 5. Boyega went to church with his family every day. His father, who is a preacher, wanted Boyega to follow in his footsteps and join the ministry. He was noticed by the Artistic Director of Theatre Peckham, Teresa Early, who saw him act in a primary school play and invited him to join the theatre school for talented children between the ages of 9 and 14, after obtaining financial assistance from a hardship fund. He attended Westminster City School as a teenager. He later took part in various school productions and attended classes at Theatre Peckham. He was a performing arts student at South Thames College in Wandsworth and was active in theatre productions there, including the lead in Othello in 2010. Boyega also studied Film and TV at University of Greenwich.

His acting career began age nine, when the artistic director of Theatre Peckham saw him act in a primary school play.
Teresa Early said: “I saw him and thought, ‘Oh, that boy has something’,” she said.
Ms Early invited Boyega to join the theatre school, a special programme for talented children aged nine to 14, and, after securing financial assistance from a hardship fund, he enrolled.

Even though Boyega went to drama classes and rehearsals at Theatre Peckham almost every day after school and on weekends when he was younger, friends say he kept it quiet.
A friend of Boyega’s who grew up on the same council estate as him said that “not a lot of people knew” about his acting.
“Everyone else does football when they’re young,” he explained. “John didn’t play football, he was more interested in acting, so he didn’t want to make a big fuss about it.”

Ms Early, who was Boyega’s drama teacher from age nine to age 14 at Theatre Peckham, said there was a “bit of a problem” over whether his parents would allow him to pursue acting as a career.
“His father was a preacher and he wanted him to be a preacher too,” she said. “I had a chat with John’s father when he was about 12 or 13.
“As long as John stayed out of trouble they were quite happy. And as John made his way, his father began to think there was some wisdom in it.”

Boyega’s friends said the council estate in Peckham where he grew up was rough, and gangs, guns and knives were part of everyday life.
Daniel Ross, 22, a neighbour and friend of Boyega’s, said their estate had been “very, very violent” when they were teenagers.
“You would never see John on the street or hanging around gangs though,” he said. “I only saw him in church or in acting school.”
Demi Rump, 22, a close friend of Boyega’s during their school years, said: “A lot of boys in his year are now in prison or dead.
“Everyone was going down one route towards the end of school – taking drugs, selling drugs, gangs, that sort of thing – but John went down another. I am so thankful he got out of it.”

Boyega trained at the Identity School of Acting in Hackney, and appeared in Six Parties at the National Theatre and Category B at the Tricycle Theatre prior to being offered a role in the 2011 film Attack the Block. In September 2011, HBO announced that Boyega had been cast in the boxing drama pilot Da Brick, loosely based on Mike Tyson’s life. Boyega was expected to play Donnie, who is released from a juvenile detention centre on his 18th birthday and begins to examine what it means to be a man. The pilot was written by John Ridley, but was not picked up by HBO. Also in 2011, he acted in the film Junkhearts in which he portrayed a drug dealer who found some guns and tried to sell them.

Boyega was chosen by Fionnuala Halligan of Screen International as one of the “UK Stars of Tomorrow 2011” and appeared alongside two other actors on the front cover of that magazine in its July 2011 edition.

In March 2012, Boyega was cast in the film adaptation of Chimamanda Ngozi Adichie’s book Half of a Yellow Sun.

On 29 April 2014, it was confirmed that Boyega had been cast as a lead character in Star Wars: The Force Awakens. It was later revealed Boyega would play Finn, a stormtrooper for the First Order, who leaves the fascist military power after witnessing their cruelty in his first combat mission before joining the fight against them. The film was released on 18 December 2015.

Boyega has stated in an interview that he is a fan of Marvel Comics, and that he had hoped to play the Marvel character Black Panther.

He has since voiced a character in the animated Major Lazer series and appeared alongside Emma Watson in the thriller The Circle (2016). He will also appear in the next Star Wars film, Star Wars: Episode VIII, which has yet to receive a title, but is scheduled for a 2017 release.
Filmography:
The Circle (2016)
Star Wars: The Force Awakens(2015)
Imperial Dreams (2014)
Half of a Yellow Sun(2012)
Junkhearts (2011)
Attack the Block (2011)

Black Reel Award for Best Actor
NO POPULAR ENDORSEMENTS YET.