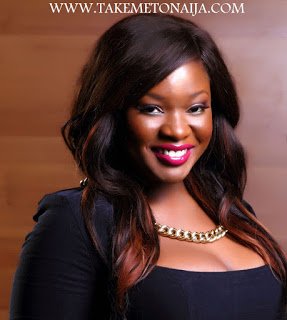 Tolu Oniru known simply as Toolz came back from the United Kingdom with a degree  in Business and Mass Communication from the London Metropolitan University to take up a job in the broadcast media, things have been on the up and up for her.Tolu Oniru,is a Nigerian radio personality, talk show host, and presenter. She currently hosts her own radio show ‘The Midday Show with Toolz’
(weekdays) on one of Nigeria’s  top urban radio stations – The Beat
99.9FM. (www.thebeat99.com)
Toolz also hosts ‘The Juice’ by NdaniTV which airs on Africa Magic Entertainment.

Tolu Oniru aka Toolz was born on July 6th in Lagos to the famous Oniru family of Lagos. Her primary and secondary education were in Lagos, Nigeria before she left for the United Kingdom for her A levels and degree at the City of West Minister college. She wanted to study medicine but her phobia for blood sent her in a different direction.

Today, She has a degree in Business and Mass Communication from the London Metropolitan University. Tolulope ‘Toolz’ Oniru, is a vivacious and award-winning on-air personality.

Her parents are the famous Oniru Royal family of Lagos State.

Her family have been supportive, but they
don’t really get involved – her father wanted him to be a doctor/lawyer, his father wasn’t particularly thrilled with her decision to get into
entertainment. Now he sees her on TV, in magazines, hears her on radio and
he respects how hard she have worked. Even though he never wanted her in
entertainment.

Before she moved to Lagos in mid-2008, she worked with MTV Europe
and Walt Disney Pictures in the United Kingdom. In 2009 she auditioned
to be a radio presenter at the Beat 99.9FM after a friend mentioned the
new radio station to her before she moved to Lagos.
After a successful audition process, Toolz began hosting her own
radio show in April 2009 and her blend of natural humour, love of most
things showbiz, passion for music and strong African entertainment
knowledge makes her show one of the most sought after – by listeners and
celebrities alike.

When asked how  Nigeria was for her when she came from the U.K she  said:
“I moved in 2009 actually. It has been one
of the toughest but most rewarding journeys I’ve been on (and still
on). I try not to focus on regrets. I miss constant electricity, hate
Lagos traffic, but I believe I have made an impact here that I wouldn’t
have, if I had remained in the UK.”

When she started with Beat FM, she thought she was going to be fired in three
months or even less because she is quite a shy person. The idea of him just
being behind the microphone and talking for hours sends jitters down her
spine. Believe it or not,she still suffer stage fright.

Toolz is extremely passionate about Nigerian/African music, and in
2012 she approached the organizers of  Nigeria’s biggest music awards
ceremony – The Headies (formally known as the Hip Hop World Awards) and
successfully introduced a new category called the ‘Rookie Of The Year’
which gives recognition to talented upcoming Nigerian musicians.

Writing is another one of Toolz’ passions, and she has a column –
‘Toolz’ Thoughts’ on BellaNaija, Nigeria’s most popular lifestyle and
entertainment website which she began in 2012. She is also a contributor
for the MTV Base Official Naija Top 10 show.
Toolz has served as a judge for the Channel O Music Video Awards both in 2011 & 2012.
Toolz was also a judge for the MTV Base VJ Search in 2012.

In 2013, Toolz hosted the first season of Glo X-Factor West Africa.
In 2014, Toolz guest co-hosted 10 episodes of Ebony Life TV’s The Spot
In 2014, she was listed on YNaija’s 10 Most Powerful People In Media list.
In July 2014, she started a weekly feature – Afrobeats News on
Capital Xtra one of the biggest urban music radio stations in the UK.

Toolz has graced the cover of numerous magazines (In Nigeria)
including This Day Style, TW, Complete Fashion (twice), YNaija!
Magazine, Allure and My Streetz.
When Toolz isn’t on radio or hosting ‘The Juice’ or hosting/MCing
events, she loves to relax with family, read, socialize with friends,
watch movies, travel and SHOP.

When asked about her figure she said:
“My body is very womanly. My mum has this
figure, so I make bold to say I got it from her. I workout and I tend
to lose weight on my upper body. I have always had killer hips and when I
was growing up, I used to do my best to hide them. Back then, the vogue
was to be slim with no curves.  When I was in the UK and everybody was
going skimpy during summer, I would hide my curves in baggy tee shirts.”

She got engaged to her longtime boyfriend Tunde Demuren who is a pilot in the month of may 2015.

She also once said she is still a virgin in 2013 a sentence many do not believe even till now.. Well, she seems like a very decent girl but the fact that she’s never had sex before is what fans won’t accept from her even though she said she is saving her virginity for marriage.


NO POPULAR SCANDAL AT THE MOMENT