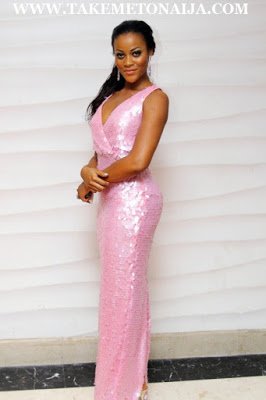 INTRODUCTION
Damilola Adegbite is a Nigerian actress, model, and television personality. She played Thelema Duke in the soap opera Tinsel, and Kemi Williams in the movie Flower Girl. She won Best Actress in a TV Series at the 2011 Nigeria Entertainment Awards.

She was born in Surulere, Lagos State. She attended Queen’s College in Yaba, Lagos and studied business administration at Bowen University in Iwo, Osun State. Tinsel was her acting debut. She has also appeared in TV commercials and hosted programs on TV.

SPEAKS ABOUT HER IN AN INTERVIEW:
Tell us a bit about your background?
Well, Damilola Adegbite was born into a family of four. I was born and raised in Lagos. In Surulere, to be precise, so I grew up in Surulere. I have a degree in Business Administration from Bowen University.
What childhood memories do you have of Surulere?
Wow! I had a fun childhood in Surulere; those street carnivals and all that. It was fun. And, the friends I had in that area, which would be exclusive to me. I had a lot of friends in the area, so you could basically just get up and walk into anybody’s house, eat with them and sleep there if you wanted to. Everybody’s door was open to you all the time in my neighbourhood, anyway.

Tinsel was her acting debut. She has also appeared in TV commercials and hosted programs on TV.
She played Thelema Duke in the soap opera Tinsel, and Kemi Williams in the movie Flower Girl. She won Best Actress in a TV Series at the 2011 Nigeria Entertainment Awards.

SPEAKING ABOUT ACTING:
How did you get into acting?
It’s always been a passion for me. Some people, along the course of life, decide to choose certain careers based on wherever life leads them. I am pretty focused and I know what I want and I always try to stick to that. I have always wanted to be in the arts. Even while growing up, everyone around me saw that that was what I wanted to do. I was always in some music or theatre-related issue. I was always doing something that had to do with the arts.
You are always well put together on the red carpet. Do you have a special designer for your clothes?
Well, I try to patronize as many people as I can in the fashion industry. Especially, if your item or your piece flatters me or something I could rock. I basically source for most of the clothes you see. They could be something I pick off a designer’s rack or something I put together myself.
So, do you have a role model in the industry when it comes to acting? Is there anybody you look up to?
Of course, there are a lot of people I admire in the industry. I learn a lot from them; I probably just watch their movies. A few of my personal favourites: I like Mercy Johnson. I like her acting. I think she is good. I like Mr. Ibu; he makes me laugh. There is something very unique about him. His talent is quite unique. I like Mojid Micheal as well. He is not a Nigerian but I think he is a very good actor. Everybody has something I like.

AWARDS AND ENDORSEMENTS
She won Best Actress in a TV Series at the 2011 Nigeria Entertainment Awards.