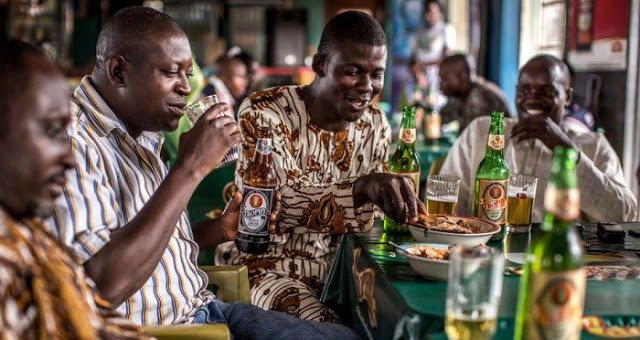 The 5 biggest alcohol drinking nations in Africa has always been a topic of big debate between us Africans, but for sure alcohol consumption in eastern Europe and south America is a culture, especially in Russian federation, Belarus and Ukraine even Germany all have a record on alcohol consumption.

In many countries people don’t always wake up to a Saturday morning the same. some get up really sober why some get up really hang overred, On this exclusive article we shall try to solve the puzzle of the 10 biggest alcohol drinking countries in Africa using a statistical calculation of the liters consumed per year.

Honestly, when i first got my hand the list i was famished, because i had some countries i never expected them on the list, but to my greatest surprise they made the exclusive list. before we deep in to the list, i must warn you that the majority of the type of alcohol consumed in most of this nations in the 10 biggest alcohol drinking countries in Africa, is very very traditional and locally made. which is not good for the human liver.
Remember excessive alcohol consumption is very harmful to your health, so keep those bottles down and  you will stay around a lot longer.

So, here are the 5 Biggest Alcohol Drinking Countries in Africa

Nigeria came up at the top of the list of hardest drinking nations in the African region.
Culturally, Nigerians are known to make and enjoy ‘ogogoro’ a local beer produced using the juice of raffia palm trees. Nigerians also enjoy palm wine, which is offered as part of intent for marriage to a woman’s parents, drunk at social gatherings like weddings and in small local pubs in the villages.

Uganda is the second country with the highest number of drinkers who are said to drink up to 11.93 liters of alcohol per person per year. Ugandans are known for their domestically produced ‘Waragi’- a name coined from the word War Gin and was commonly drunk by locals to get the courage to face the enemy at the battlefields. Waragi contains around 42% of alcohol.
At one point, Kenyans living near the Ugandan border, Malaba, had to drink beer in Uganda to escape local laws barring pubs and bars from operating until 5 pm.
Traditional fermented drinks are made from bananas, millet, and other ingredients. These drinks can be packaged or drunk from communal pots using long straws.

Being a Kenyan, I know and have witnessed how heavy some local people can drink. So big was the problem that the government introduced the Alcoholic Drinks Control Act. The new law sought to keep bars opened within a regulated time.
Random traffic police checks where motorists are required to blow into an alcoblow breathalyzer are used to reduce road carnages due to reckless driving.
Women in Kenya also drink alcohol, and sometimes as much as the men unlike in Nigeria where it is common among men.
Common traditional beers which are barred by the government include chang’aa and busaa. Of course, there are renowned brands like Tusker, among others.

This is yet another East African nation on the list, which is a worrying trend for the economic growth of the region, don’t you think?
While making and drinking beer is a business in itself, overindulging in this, can cause paralysis in the economy as the young, strong people are reduced to addicts.
Many people in Rwanda, like in Uganda make homemade drinks using local ingredients such as bananas (urgwagwa), sorghum (Ikigage), and honey (ubuki).
Only 8 percent of the local consumption comes from beer, while the other 92 percent is contributed by the local brew.

Namibia’s Windhoek Lager is not only a local brand but a renowned one in the region. The beer carries the most weight, 67 percent of the total alcohol consumption in the country.
The World Health Organization (WHO) ranks the country fifth on the African continent with a Namibian consuming an average of 9.62 liters of alcohol per year.
Being a warm country, most of the beer drunk here is mainly lager. During winter, though, locals appreciate ‘Urbock’- a local beer.
It is good to note that Namibia does not have a rich tradition of wine making compared to Uganda, Rwanda, and Kenya where local alcohol can be made using sorghum, bananas, and honey, among other locally available resources.
According to the WHO, by 2012, about 3.3 million people in the globe succumbed to deaths related to alcohol consumption. According to the global health agency, one out of twenty deaths in the world is as a result of alcohol, which comes to 7.6% for men, 4.0% for women. Although no particular disease stands out, the highest numbers of deaths are from cardiovascular diseases, liver cirrhosis, and cancers.
With that, now you know overindulging in alcohol is an unhealthy behavior for your health and social wellbeing.