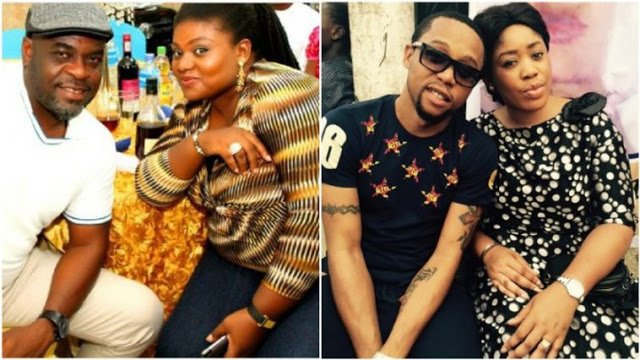 Not many Yoruba movie lovers might know that most of the talented
actors they admire on the screen are married. However these actors are
not just married but have very beautiful wives.
It is also noteworthy that these wives can be seen to be quite
territorial when it comes to their husbands particularly as regards
their female fans.
Below is a list of popular Yoruba actors and their beautiful wives Compiled by NET

Renowned comic actor, Bolaji Amusan aka Mr Latin is married to
Ronke Amusan, a movie writer and producer. The couple, who met in Isabo,
Abeokuta in Ogun state, have two kids together.
Ronke, who recently celebrated her 40th birthday, is currently based in Dublin with their children.
Funsho & Victoria Adeolu

Popular actor, lecturer and MTN ambassador, Hafiz Oyetoro, better
known as Simply Saka is married to Olaide Oyetoro. The couple have been
married for over 10 years and have three kids together.
Hafiz met his wife as a student of Adeniran Ogunsanya College of Education, the same school he lectures.
Lanre (Baba Ijesha) & Omotoyosi Omiyinka

Talented actor and producer, Yomi Fabiyi got married to his British lover, Fran on December 23, 2012 at Apapa Registry Lagos.
The couple met at Manchester, when Yomi was on a long vacation.
Yomi had family introduction in the UK before Fran came to Nigeria to
see the actor’s family. Fran is a human resources consultant.
Odunlade & Ruth Adekola

Ruth Adekola is the better half of the talented Yoruba actor and
Glo ambassador, Odunlade Adekola. They got married a couple of years ago
and their union is blessed with four boys.
Ruth Adekola, a staunch born-again christian, is an undergraduate of Moshood Abiola Polytechnic.
Aina Gold & Olajumoke

Aina Olabimpe Olajumoke is wife of renowned actor, Aina Gold. She
is an assistant head in a public school and also the chairman of board
of directors of a private school called B-Gold group of schools.
Olajumoke and Aina Gold met when they were very young at their
neighbourhood in Oshodi, Lagos. Their union is blessed with beautiful
kids.
Ojopagogo & Mojirola

Actor and son of respected role interpreter, Sunday Omobolanle aka
Papi Luwe, Sunkanmi Omobolanle and his sweetheart of many years,
Abimbola, walked down the aisle on June 30, 2011, in an elaborate
ceremony.
The couple dated for 10 years before they signed on the dotted line.