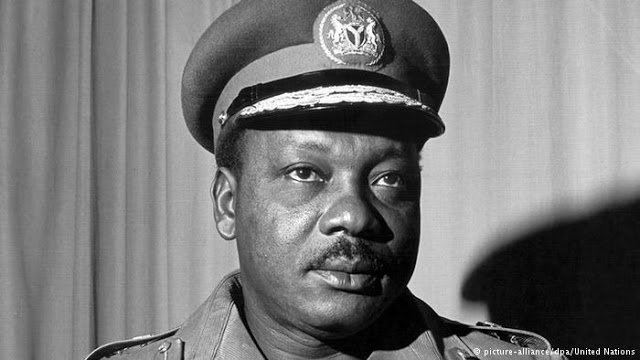 Here is a true narration of the incident by Andrew Nwankwo, Maj. Gen. Aguiyi Ironsi’s ADC in an interview with Sun News.

The coup
Recalling the events of that night, July 29, 1966, Nwankwo noted that
they were in Ibadan, “we had a small detachment of 106 Artillery,
Commanded by one Walbe from Plateau”
The Head of State had the previous day hosted traditional rulers from
all parts of the country in the Ibadan Government House. “He wasn’t
feeling quite well, he had a knee problem and had to go to bed early.
“Lieutenant Sanni Bello was the army ADC, and we were very close. So, we
left that night to go and look out and came back late. Lt. Adamu who
was the ADC to Fajuyi, Sanni Bello, Walbe and myself, we all slept
together in one room that night”.
“At about 4a.m the telephone rang, I picked it up and that was Adeola,
the then commissioner of police, Ibadan he said he wanted to speak with
Ironsi, I said I was the ADC, he said he wanted to speak with him
because there was a coup and he gave me some names Orok and two others
that had been killed in
Abeokuta.
“Immediately, I made a mental picture of it, and I knew that it was the
northerners that were responsible. So, I handed the phone to Ironsi and
they talked. I then alerted Adamu and Sanni Bello and said look, there
is a coup and the trend is this way.
“Bello assured me that if it is his own people he will protect me,
because, there was tension in the land such that we knew a coup was
imminent. So, we agreed to protect each other depending on where it will
be coming from. I later discovered that Walbe who was sleeping with us
was part of the coup; he later became ADC to Gowon.
“Around 5:30 we heard gunfire, then Ironsi had called Col. Njoku to tell
him about the coup. As Njoku was going out, he was short at, but he
escaped with bullet wounds. It was Njoku, who was the commander of Lagos
Garrison that alerted others outside the Government House, Ibadan.
“Fajuyi later sent me outside the government House to find out what was
happening. I met Danjuma, who was then a major and he was my friend. He
pretended he didn’t know what was happening, he was asking me, and I
said I didn’t know. While I was trying to go back, one sergeant from
Benue almost shot me, but Danjuma stopped him and spoke to him in Hausa.
Danjuma later told me that he would like to see Ironsi, so that he
could tell them what to do.
“It was then that Fajuyi came out to find out what was holding me, and
there inside the Government House Danjuma ordered for his arrest and
mine too. That was when I saw Walbe. Then Fajuyi asked me to take him to
Ironsi so that they will obey him, that there should be only one person
in charge. So, I took them to Ironsi, and major Newman, immediately he
saw Ironsi, he seized his crocodile swagger stick, and then they started
asking him about the January coup, he said he didn’t know about it that
he only agreed to be Head of State so that he can restore confidence
and normalcy. It was immediately they arrested Ironsi that they turned
violent”.

The road to the valley of death
They marched us down, Ironsi and myself, to where Fajuyi was. They used
telephone cable to tie my hands behind and my legs, with a little space
to walk. Same they did to Ironsi, but they removed his shirt, he wore
only trousers, they also tied Fajuyi. Ironsi was in a Land Rover, Fajuyi
in a mini bus and myself in another bus. They drove us towards Iwo
Road, 10 km from Ibadan, there was a small forest were they stopped,
marched us to the right hand side of the bush, Fajuyi was leading and as
he tried to cross a small stream, he fell down, the soldiers were
unruly, it appeared some of them had for the first time taken Indian
hemp, so when he fell down some of them started beating him.

HIS ESCAPE
As Fajuyi fell down and they were beating him, Sanni Bello came to me
and tapped me and said, we could do something now. It was providence,
may be I was not destined to die. I took a few steps from them and
jumped into a nearby ditch, all in a split of a second, Bello came and
stood by the ditch and was shouting that I had escaped pointing at
another direction. So the soldiers ran around that direction shooting
into the bush, and when they felt they must have killed me, they shot
Fajuyi and then Ironsi there, by the side of the stream. So Bello made
sure that he was the last to leave the place.
The ADC, who was later elected senator in 1983 stated that the former
Head of State could have escaped if not that he wanted to make sure that
there was no bloodshed. He said if he sacrificed his life and prevented
bloodshed in Nigeria, it’s better for him. Even his chaplain urged him
to escape but he said No. Also many of his officers who were contacted
instead of taking action ran away.
The ADC denied the prevailing story that Ironsi was tied to a Land Rover
and dragged along the road. He maintained that he saw Ironsi and Fajuyi
shot dead. “They shot him on the chest and it was a burst, so he would
have died after the first shot”.