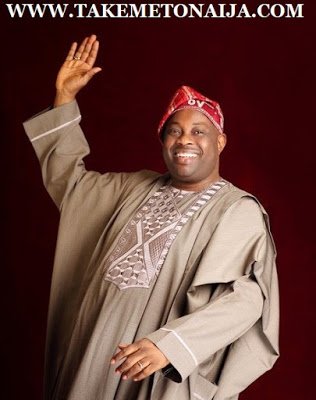 Dele Momodu is a Nigerian Journalist/Publisher, polemicist, businessman, philanthropist, actor and motivational speaker. He is the CEO and publisher of Ovation International, a magazine that has given publicity to people from all over the World, mainly in Africa.

Ayobamidele, meaning “my joy has followed me home”, is the last of three siblings. He lost his Dad at the age of 13 relying on his Mum and relatives for support. Dele was taught by his late Mum, who died on the 18th of May 2007, not to despair even when times are tough. This was exemplified by her continual support of him even when others had written him off. She had given him up to a third chance at passing his WAEC ( Senior Secondary Exams ) Although his Mum’s source of income was from petty trading, and with two older children to care for, she laboured hard to sustain her family, and in the words of Dele Momodu “She didn’t give up on me”.

Dele Momodu is a graduate of University of Ife, (now Obafemi Awolowo
University, Ile-Ife) 1982, Dele holds a degree in Yoruba and a master’s
degree in English Literature in 1988. He lectured at the Oyo State
College of Arts and Science in Ile-Ife, between 1982–83 while on
National Service. Between 1983–85, he was private secretary to the
former Deputy Governor of Ondo State, Chief Akin Omoboriowo.

In 1986, Dele Momodu served the Ooni of Ife, Oba Okunade Sijuwade Olubuse
II, managing the Motel Royal Limited owned by the monarch. Following
Dele’s resignation from the Motel Royal, he went on to study for his
post-graduate degree in English literature. He was during this time
contributing articles to the likes of The Guardian, Sunday Tribune and
other Nigerian-based publications.

In May 1988, Dele Momodu got his first job as Staff Writer with the African Concord magazine, owned by late Chief Moshood Kashimawo Olawale Abiola. A year later, he was transferred to Weekend Concord as a pioneer staff. He wrote the first cover story for the paper in March 1989. He also contributed to other publications such as the National Concord, Sunday Concord, Business Concord and the Yoruba newspaper, Isokan. In May 1989, he became Literary Editor, within six months he became News Editor of the Weekend Concord. Between May 1990 and September 1991 edited May Ellen Ezekiel’s Classique, a celebrity magazine an appointment which made him the highest paid editor in Nigeria. He resigned and tried his hands on doing business as a bread distributor for his mentor Chief Moshood Abiola, who owned the ‘Wonderloaf’. Following this, Dele Momodu started a public relations outfit, Celebrities-Goodwill Limited, which managed the accounts of Chief Moshood Abiola, Dr Mike Adenuga, Mr Hakeem Belo-Osagie and other distinguished Nigerians.

In 1993, Dele resigned to join the Moshood Abiola Presidential Campaign Organization, Dele Momodu was arrested and detained at Alagbon Close in Lagos, after the annulment of the 12 June Presidential election by General Ibrahim Babangida. He was severely punished for his pro-democratic views but was undeterred. He was to be arrested in 1995 and charged fortreason by the government of Sani Abacha, then a dictator. He was accused of being one of the brains behind the pirate radio station, Radio Freedom later changed to Radio Kudirat, after the cold-blooded murder of Alhaja Kudirat Abiola. Dele Momodu managed to escape masquerading as a farmer through Seme border into Cotonou, in Benin Republic, from where he fled to Togo, Ghana and eventually to the United Kingdom. For three agonising years, Dele could not re- enter his homeland, Nigeria. He has since been absolved of all charges made by the Abacha administration.

Momodu has received innumerable awards and honours, and has garnered
recognition for his work in the world of business, politics, literature,
the music industry and the fashion industry in which he plays major
roles. Tiwa Savage, one of Nigeria’s most popular singers has credited
Momodu for giving her career a kickstart by putting a picture of her in
Ovation International after he was invited to a spectate a talent show
in her school. Dele Momodu has been seen at many social events and has
now become an international household name.

Dele Momodu started Ovation International in 1996 while still in exile. After the death of MKO Abiola in prison and subsequently, the death of his persecutor, Sani Abacha,
Dele ended his exile. Since then, Dele has expanded Ovation
International, and it is now one of Africa’s most popular celebrity
magazines. Ovation International is also reputed for being the only
bi-lingual magazine in Africa, having editions printed in both English
and French.

Dele Momodu has held an annual event every year since 2008 (except in
2010, due to the impending presidential elections), known as the Ovation
Red Carol (later changed to Ovation Carol and Awards). The Red Carol is
held every December, and has become one of West Africa’s most popular
annual Christmas events, often involving musical performances, drama,
fashion shows and award presentations for varying charitable causes.
From 2008-2012 it was held in Lagos, Nigeria, but was held in Accra, Ghana in December 2013. In 2013, former president of Ghana J.J. Rawlings attended, with Wyclef Jean as the headline act, along with many other international performers, including M.I, Ice Prince and Burna Boy from Nigeria.

Dele writes
a weekly article called PENdulum. They are published every Saturday on
the back page of Thisdaynewspaper. The articles are praised for
highlighting issues in Nigeria, as well as discussing popular topics,
current events and famous people, often in a polemic/critical style. And
was a prominent voice for the APC presidential Candidate at the 2015
general election in Nigeria, the current president Muhammadu Buhari

Dele Momodu announced his intention to run for the presidential election
of his homeland Nigeria, which was held in 2011. On 12 January 2011, he
emerged Presidential Candidate of the National Conscience Party (NCP)
after a keenly contested party primaries between Dele Momodu, Chief
Martin Onovo and Atei Beredugo. Dele Momodu polled 169 votes to clinch
the presidential ticket, whilst Onovo and Beredugo polled 8 and 14 votes
respectively.

Oct 2nd 2015 Dele Momodu became the 1st recipient of 9jaMentors Awards for his outstanding and unquestionable role toward empowering the Nigerian Youth.A role that has spanned over a decade and still counting. And some other awards.