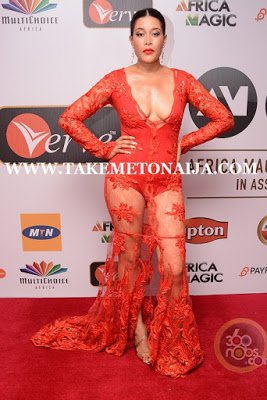 INTRODUCTION
Aduni Ade is a Nigerian actress who came into limelight in 2014 after moving to Nigeria to make a career in Nollywood. She is a single mother of two and has been doing ever since she came into the movie industry.

Adunni Ade was born  to a Nigerian Father and an American/German mother in Queens, New York. She is an actress and a model who had her primary education at Chrisland School, Ikeja, Lagos. And her secondary school at Bells Secondary School in Ota. Afterwards, she relocated to America where she studied accounting at the University of Kentucky.

She says, “Entertainment has always been part of me. Even when I was young, I would stand in the front of a mirror, acting out the fashion part of me. I never wanted to be a lawyer or anything. God blessed me with a lot of talents.”
She adds that though her Lagos-based father, who she describes as a ‘big and well successful businessman’ inspired her to study Accounting, neither he nor her (Adunni’s) mum has any problem with her love for show business.
“My father supports me 100 per cent. My mum is very proud of me. Americans don’t care about this kind of thing. They support their children in whatever they choose to do. So, I have no problem building a dream in the entertainment industry. The fact is that I have never been a copycat. I am not looking for the fastest way to limelight. Rather, I want to express myself. My ambition is to be recognised worldwide. But I want to be known for what I have done. I want to be successful through hard work.”

PERSONALLY SPEAKING ON HER BACKGROUND IN AN INTERVIEW:
Can you tell us about your background?
My father is from Lagos, Badagry, my mum is from Kentucky. I had my primary school education at Chrisland, Opebi and my secondary at Comprehensive school in Sango-Ota. Afterwards I traveled back to the states where I studied accounting at the University of Kentucky before I came back to Nigeria. I didn’t come back right away, it was like 10-11 years afterwards, but before then I had started my career in the entertainment industry as a model and an actress. So, I would say I have been in the entertainment industry for 10 years.
What year did you finish from Kentucky?
I finished in 2008 because along the line, I got pregnant so I had to take a break from school but I got back to school as soon as I had rested well and able to resume classes.

While she was in America, she dabbled into modelling and made it as far as America’s Next Top Model. She made her debut into the Nigerian movie industry around 2013 when she started uploading her skits online. Her first movie is You or I produced by Saheed Balogun.

Her video skit, Date Gone Bad, released on Youtube about 10 days ago, has attracted so much attention that it has recorded over 100,000 hits.

That sounds very cool for an actress to entrench herself in aiming the Nigeria’s star-studded movie industry.
Adunni who is very surprised at the turnout of the comedy skit says “I must say I am shocked at the kind of attention the skit has got,” “I knew it would be good, but I did not imagine it would get up to this level.”
Adunni first attracted attention when she featured in Saidi Balogun’s movie, You or I, Fred Idika’s Behind the Cloud (a TV series), Dereck Obasi’s Babatunde Diaries and  a new film by Desmond Elliot – Rosemary Roses. Besides, the graduate of Accounting from the University of Kentucky, USA, also featured in Sound Sultan’s music video, Kokose, while she did same for Ice Prince last September.

While Adunni says she does not give attention to men when they make suggestive moves to her – say, on location – she enthuses that everyone welcomes her at work. But when asked emphatically if men have been making all kinds of advances to her, she says, “Obviously!”

Speaking on how she became fluent in Yoruba, Adunni explains that from day one, she has always been a fan of culture.

“I believe you must embrace who you are. I don’t understand why anybody will want to say, ‘I try to run away from who I am’. You have to be yourself. You have to be proud of yourself. That is why I want to speak Yoruba at every opportunity I have – even when I am in the US.”
SPEAKING ABOUT HERSELF AND CAREER:
You have two kids and fans have wondered about your relationship status.
I don’t hide  because it’s a part of me and I don’t think there’s any need to lie or make myself look good but I have never been married. I was with my ex, my children’s father Michael Boyd, for eight years and things did not work out and I just let it go and that has been three years ago.
Knowing about the ups and downs in the Nigerian movie industry, how do you intend to cope?
Where in the world would you go and not see things having its own ups and downs? It’s not all going be a bed of roses, there are bound to be challenges here and there. But I always say this as well, I don’t see anything as a challenge, I always see it as part of life. You go through things whether good or bad to achieve whatever you want to achieve in life. So if something is not working out at that moment, you just have to make another way. Make it work and make it better and you keep moving.
Which Nigerian movie did you first feature in?
Actually, my first movie in Nollywood was a Yoruba movie produced by Saheed Balogun, You or I. At that time I had not relocated to Nigeria. I actually flew in to shoot the movie and when I was done shooting I went back.
What were the challenges you faced at the start of your career?
To be honest I don’t see anything as “ups and downs,” I just see it as part of life. But if you want me to mention, maybe the accessibility to contacts of producers or directors because things of that nature, it can be tough, at least for a “new comer”. Still, I think when you work and do your job well you won’t need to look for anybody, people will look for you.
Did you at any point think you would feature in Yoruba movies?
I do both Yoruba and English movies but I do more of English. Out of 40 movies that I have featured in, I think Yoruba has actually been three or four . Early this year, I worked with Toyin Aimakhu on her movie Iya Ibadan and it was a great experience. Last year in Ekiti state, I also worked with daddy Jide Kosoko.
Aside acting, is there any other thing you are involved in?
Yes, I am a model and that’s my 24/7 job, which is going to be there forever. I have little things that I do by the side as well. I still work with my father once in a while. He is a business man and the CEO of Westman Nigeria Limited. I just contribute my quota by helping him set up appointments with clients and gain new clients as well for the company.

She also disclosed why she lived with her baby daddy without getting married to him and why she is still a single mum.
Adunni Ade said: “I have said this, it’s not something I want to hide, it’s a part of me and I don’t think there’s any need to lie, or make myself look good or whatever, but I have never been married. I was with my ex, Michael Boyd, who is my children’s father for eight years, and things did not work out and I just let it go and that has been three years ago.” The light-skinned actress further disclosed that she is a sucker of love and that is why it takes her time before she gets into any relationship.
Adunni continued: “I’m a sucker for love, I love hard, that is why I take my time before diving into any relationship with the person I will love. I will do whatever I can in a relationship to make it work because I just don’t get involved with people anyhow. If the chemistry or connection is not there, then you would never find me there. But in my heart, if I feel like I have a connection with that person, I’d try and take it as far as I can and if I know it’s not going to work, I’d end it quick. But I am a big fan of love, Love is good. There is still some love out there even though people try to deny and say there is no more love; there is still love.”
On her source of motivation, Adunni disclosed that her two children inspire a lot. She added that there is nothing shameful about being a single mother and ready to face whatever music the society attaches to it.