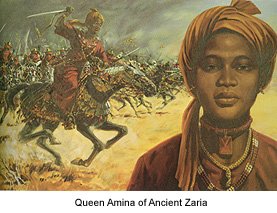 Amina of Zaria commonly known as the warrior queen, expanded the territory of the Hausa people of north Africa to the largest borders in history. More than 400 years later, the legend of her became the model for a television series about a fictional warrior princess, called Xena.

Amina was the warrior queen of Zazzau (now Zaria). She is known also as Amina Sarauniya Zazzau. She lived approximately 200 years prior to the establishment of the Sokoto-Caliphate federation that governed Nigeria during the period of British colonial rule following the Islamic jahad (holy war) that overtook the region in the nineteenth century. According to most accounts, Queen Amina ruled for 34 years at the turn of the sixteenth and seventeenth centuries. Her domain of Zazzau, a city-state of Hausaland, was eventually renamed to Zaria and is the capital of the present-day emirate of Kaduna in Nigeria. Although many details of her life remain largely in dispute among historians, the fact that she existed is a matter of general acceptance, and she is presumed to have been a Moslem ruler. Much of what is known of Queen Amina is based on information related in the Kano Chronicles, a translation by Muhammed Bellow of pre-colonial African tradition based in part on anonymous Hausa writings. Other details were pulled from the oral traditions of Nigeria. As a result, the memory of Queen Amina assumed legendary proportions in her native Hausaland and beyond. The extent of her military prowess and her performance in battle was augmented by lore and remains unclear.

The reign of Amina occurred at a time when the city-state of Zazzau was situated at the crossroad of three major trade corridors of northern Africa, connecting the region of the Sahara with the remote markets of the southern forest lands and the western Sudan. It was the rise and fall of the powerful and more dominant Songhai (var. Songhay) people and the resulting competition for control of trade routes that incited continual warring among the Hausa people and the neighboring settlements during the fifteenth and sixteenth centuries. It was not until later that a ruling arrangement between the Hausa and the Fulani people ultimately brought a lasting peace to the region and survived into the colonial era of the nineteenth century.

Amina was the twenty-fourth habe, as the rulers of Zazzau were called. She is believed to have been the granddaughter of King Zazzau Nohir. Speculation suggests that she was born sometime during his reign, around 1533. This theory lends credence to the belief that Amina ruled Zazzau at the end of the sixteenth century. The citizens of Hausaland at that time displayed advanced skills in the industrial arts of tanning, weaving, and metalworking—in contrast to the inhabitants of the neighboring territories and surrounding cultures, where agriculture remained the dominant activity. The Hausa social hierarchy, as a result, was bound less rigidly in the social standings of tradition, which were based on hereditary factors.

Amina was born the eldest of three royal siblings. She was 16 years old when her noble parent, the powerful Bakwa of Turunku (var. Barkwa Turunda), inherited the throne of Zazzau. Historical accounts of Bakwa, the twenty-second habe of Zazzau, vary as to whether Bakwa was Amina’s father or mother. Although the reign of Bakwa was known for peace and prosperity, the history of the Hausa people was nonetheless characterized by military campaigns for the purpose of increasing commerce. During the years between 1200-1700 Hausaland was, in fact, fraught with warring parties. These descended into neighboring territories that were inhabited by the Jukun and the Nupe to the south, in an effort to control trade and to expand the Hausa communities into more desirable environs. The Hausa, in turn, were conquered intermittently during those years by various other peoples. The Mali, Fulani, and Bornu were among the aggressors in these clashes. During the reign of Bakwa, the teenaged Amina occupied herself in honing her battle skills, under the guidance of the soldiers of the Zazzau military.

As was the custom of the region, the rule of Zazzau fell to Amina’s brother, Karama, upon the death of Bakwa in 1566. Although Karama was the younger of the two, it was the male heir who took precedence in ascending the throne. The third sibling, a sister named Zaria, eventually fled the region. By the time that Amina assumed the throne, following the death of her brother in the tenth year of his rule, she had matured into a fierce warrior and had earned the respect of the Zazzau military. Amina, in fact, established her dominance as the head of the Zazzau cavalry even before she came to rule the city-state.

HER INFLUENTIAL AND LEGENDARY WORKS

BATTLE
Within three months of inheriting the throne, Queen Amina embarked on what was to be the first in an ongoing series of military engagements associated with her rule. She stood in command of an immense military band and personally led the cavalry of Zazzau through an ongoing series of campaigns, waging battle continually throughout the course of her sovereignty.

She spent the duration of her 34-year reign in military aggression. Although the military campaigns of Amina were characterized as efforts to ensure safe passage for Zazzau and other Hausa traders throughout the Saharan region, the practice proved effective in significantly expanding the limits of Zazzau territory to the largest boundaries before and since. African chronicler, P. J. M. McEwan quoted the Kano Chronicles, which stated that Amina, “conquered all the towns as far as Kwararafa [to the north] and Nupe [in the south].”

According to all indications, she came to dominate much of the region known as Hausaland and beyond, throughout an area called Kasashen Bauchi, prior to the settlement of the so-called Gwandarawa Hausas of Kano in the mid 1600s. Kasashen Bauchi in modern terms comprises the middle belt of Nigeria. In addition to Zazzau, the city-states of central Hausaland included Rano, Kano, Daura, Gobir, and Katsina. At one time, Amina dominated the entire area, along with the associated trade routes connecting the western Sudan with Egypt on the east and Mali in the north. In keeping with the custom of the times, she collected tributes of kola nuts and male slaves from her subject cities. Also, as was the custom of the Hausa people, Amina built walls around the encampments of the territories that she conquered. Some of the walls survived into modern times; thus her legacy remained entrenched in both the culture and landscape of her native Hausa city-states.

Some have suggested that a neighboring Hausa king, named Sarkin Kanajeji, held Amina at a serious disadvantage in waging battle against his army, because Kanajeji’s soldiers wore iron helmets for protection. Others, however, have credited Amina with the introduction of metal armor, including the iron helmets and chain mail. It has been further suggested that she was responsible for the introduction of the new armor to the Hausa city-state of Kano. Regardless of its origin, the innovation of protective armor arrived in Hausaland during the era of Amina. Because the Hausa of Zazzau were well skilled in the metalworking crafts, it is not unreasonable to infer that Amina’s army was well protected by body armor.

Some historians have credited Amina with originating the Hausa practice of building the military encampments behind fortress walls. A 15-kilometer wall surrounding the modern-day city of Zaria dates back to Amina and is known as ganuwar Amina (Amina’s wall). Additionally, a distinctive series of walls wind throughout the countryside in the vicinities of the ancient city-states of Hausaland. These came to be called Amina’s walls to the rest of the world, although not all of the walls were built during the reign of Amina.

What Queen Amina Was Famous For; HER LEGEND

Information about the history of Hausaland during the era of Amina is sketchy. Foreign visitors who traveled to Africa during the eighteenth and nineteenth centuries collected many of the historical accounts of those times. Other information was garnered from the oral traditions of the descendants of the early Hausa people.

Historians J. F. Ajayi and Michael Crowder suggested that Amina lived in the fifteenth century rather than the sixteenth century. Ajayi and Crowder attribute their conclusion to information found in Bellow’s Chronicle. The chronicles, which are believed to portray the history of Africa with some accuracy, date Amina back to the time of Sarki (king) Dauda whose father was believed to have ruled from 1421 until 1438. In this regard there may be some confusion with the reign of Da’ud, conqueror of Macina, who ruled from 1549 until 1582. Ajayi suggested that Hausaland suffered desperately from severe aggression from Songhai to the west during the sixteenth century, and it may be unlikely that the expansionist policies of Amina prevailed at such a difficult time. Likewise reports that Amina collected tribute from Bornu may be improbable in the context of the sixteenth century, as Zaria and many other Hausa city-states had, by that time, fallen to the control of Songhai and had suffered further aggression from Bornu to the east. Such domination by Songhai and Bornu, if depicted with accuracy, preclude the possibility that the Hausa achieved extensive domination during the reign of Amina, if indeed she lived at the end of the sixteenth century.

The dearth of facts combined with the significance of the conquests of Amina have defined a legendary persona for the warrior queen of Nigeria. According to oral tradition, Amina took a new husband from the legions of vanquished foes after every battle. After spending one night with the Zazzau queen, each man was slain. Additionally, it is common belief that Amina died during a military campaign at Atagara near Bida in Nigeria. In the twentieth century the memory of Amina came to represent the spirit and strength of womanhood. For her exploits she earned the epithet of Amina, Yar Bakwa ta san rana (Amina, daughter of Nikatau, a woman as capable as a man). 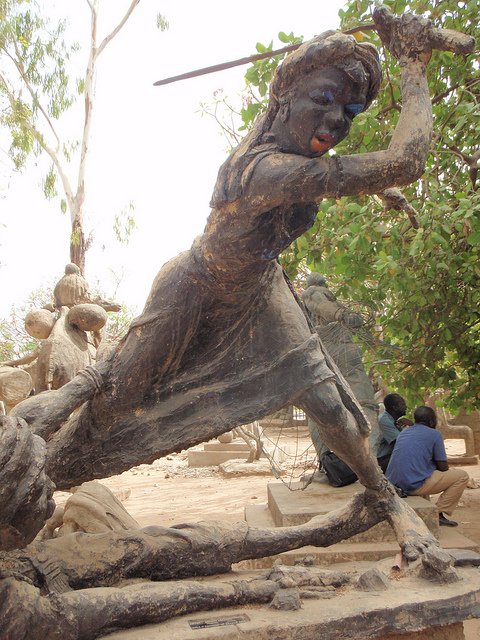