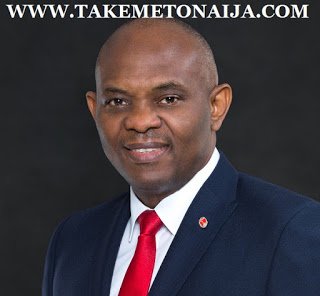 INTRODUCTION
Tony is the Chairman of Heirs Holdings, the United Bank for Africa, Transcorp and founder of The Tony Elumelu Foundation. Elumelu holds the Nigerian national honours, the Commander of the Order of Nigeria (CON) and Member of the Order of the Federal Republic (MFR).

Elumelu was born in Jos, Nigeria, in 1963. He has two degrees in Economics from Nigerian schools. His Bachelor degree was from Ambrose Alli University and he has a expert of research degree, furthermore in Economics, from the University of Lagos. He is an alumnus of Harvard enterprise School’s sophisticated administration events. Tony Elumelu wed Awele V. Elumelu, a health medical practitioner, in 1993 and has five daughters. He has four siblings encompassing the Hon. Ndudi Elumelu, a constituent of the Nigerian government House of Representatives.
In his early vocation, Elumelu made a name for himself when he came by and turned benchmark believe Bank into a top-five contestant in Nigeria. In 2005, his business reputation as an African Business foremost was closed when he led the largest amalgamation in the banking part in Sub-Saharan Africa to come by joined Bank for Africa (UBA). In five years he transformed it from a single-country bank, to a pan-African institution with over 7 million customers in 19 African countries.

In his early career, Elumelu acquired and turned Standard Trust Bank into a top-five player in Nigeria. In 2005, his corporate reputation as an African business leader was sealed when he led the largest merger in the banking sector in Sub-Saharan Africa to acquire United Bank for Africa (UBA). In five years, he transformed it from a single-country bank to a pan-African institution with over seven million customers in nineteen African countries.

Following his retirement from UBA in 2010, Elumelu founded Heirs Holdings, which invests in the financial services, energy, real estate and hospitality, agribusiness, and healthcare sectors. In the same year, he established the Tony Elumelu Foundation, an Africa-based and African-funded philanthropic organisation dedicated to the promotion of excellence in business leadership and entrepreneurship and to enhancing the competitiveness of the private sector across Africa.

In 2011, Heirs Holdings acquired a controlling interest in the Transnational Corporation of Nigeria Plc (Transcorp), a publicly quoted conglomerate that has business interests in the agribusiness, energy, and hospitality sectors. Elumelu was subsequently appointed chairman of the corporation.
Elumelu serves as an advisor to the USAID’s Private Capital Group for Africa (PCGA) Partners Forum. He sits on the Nigerian President’s Agricultural Transformation Implementation Council (ATIC). He is also vice-chairman of the National Competitiveness Council of Nigeria (NCCN) whose formation he was a key driver in, and serves as Co-Chair of the Aspen Institute Dialogue Series on Global Food Security. He additionally chairs the Ministerial Committee to establish world-class hospitals and diagnostic centres across Nigeria, at the invitation of the Federal Government and the Presidential Jobs Board, engineered to create 3 million jobs in one year. He also serves as a member of the Global Advisory Board of the United Nations Sustainable Energy for All Initiative (SE4ALL) and USAID’s Private Capital Group for Africa Partners Forum.

IN AN INTERVIEW, WHEN ASKED:
Q | Are there any issues that keep you awake at night other than jet lag?Interestingly, jet lag doesn’t keep me awake. Anywhere I find myself, I sleep normally. We are driven, there are so many things we would like to do to help in making our contribution towards the development of Africa, keeping in view our philosophy – which is: you do well, you do good. It is not just about doing well and doing good, it is about sustainability.
I keep thinking about how to buildwto last. I think about how to make significant impact. I think about there is so much I want to do. For instance, I want to set up a fertiliser plant, a chemical plant, so I keep thinking how to make it happen quickly. Those are things I think about, nothing keeps me up at night.  I thank God for that contentment.

Following his retirement from United Bank for Africa in July 2010, Elumelu founded The Tony Elumelu Foundation. His stated objective was to “prove that the African private sector can itself be the primary generator of economic development.” The Foundation is charged with the mission of driving Africa’s economic development by enhancing the competitiveness of the African private sector. As a premier pan-African-focused not-for-profit institution,the Tony Elumelu Foundation is dedicated to the promotion and celebration of entrepreneurship and excellence in business leadership across the continent, with initiatives like The Tony Elumelu Entrepreneurship Programme (TEEP)
The Foundation deploy its resources to generate solutions to challenges that inhibit the growth of the African private sector. Through its commitment to catalytic philanthropy, the Tony Elumelu Foundation seeks to achieve its mission by enhancing the capacity of African businesses, supporting and driving policies that promote competitiveness, deploying financial capital through impact investments, and educating public and private sector actors through rigorous research.

Elumelu is the originator of the term Africapitalism. According to him, Africapitalism is an economic philosophy that embodies the private sector’s commitment to the economic transformation of Africa through long-term investments that create both economic prosperity and social wealth. Elumelu sees Africans taking charge of the value-adding sectors and ensuring that those value-added processes happen in Africa, not through nationalisation or government policies, but because there is a generation of private sector entrepreneurs who have the vision, the tools and the opportunity to shape the destiny of the continent. He insists that Africapitalism is not capitalism with an African twist; it is a rallying cry for empowering the private sector to drive Africa’s economic and social growth.
Elumelu subscribes to Michael Porter’s concept of Creating Shared Value (CSV). He studied under Professor Porter at Harvard Business School and Professor Porter is the Founding Patron of The Tony Elumelu Foundation. CSV refers to the idea that “companies must take the lead in bringing business and society back together.” It asserts that “businesses acting as businesses, not as charitable donors, are the most powerful force for addressing the pressing issues (society) face(s).”
In 2003, the Federal Government of Nigeria granted Tony Elumelu the title of Member of the Order of the Federal Republic (MFR), a national honour. In 2006, Elumelu was voted African Business Leader of The Year by the Africa Investor magazine and was recognised African Banker of the Year in 2008 by the African Banker magazine. In 2009, the Nigerian President Umaru Musa Yar’adua asked him to serve on the Presidential Committee on the Global Financial Crisis.
In 2012, he was awarded the prestigious National Honour of Commander of the Order of the Niger (CON) for his service in promoting private enterprise. He was recognised as one of “Africa’s 20 Most Powerful People in 2012” by Forbes Magazine. In addition, the New African Magazine featured him in their list of the “100 Most Influential Africans in Business.”He was awarded an honorary doctorate of science degree from the Benue State University and an honorary doctorate of business administration from the University of Nigeria, Nsukka.
In 2013, Mr Elumelu received the Leadership Award in Business and Philanthropy from the Africa-America Institute (AAI) Awards. He was also named African Business Icon at the 2013 African Business Awards.
ESI-Africa, frequently described as “Africa’s power journal”, named Elumelu in its 2015 ‘ESI Most Influential Figures in African Power’ list, in January 2015.