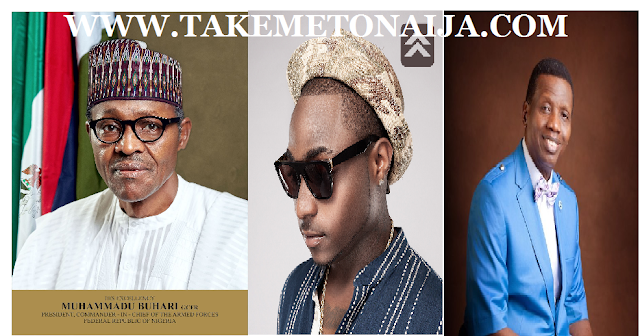 After weeks of research T.I.N Magazine finally comes up with the 2016 list of the ten most famous people in Nigeria.
Our research was done in different parts of Nigeria by asking people different questions about the nominees. All thanks to the T.I.N Magazine readers who volunteered themselves to help carry out this research in their states.

TEN MOST FAMOUS PEOPLE IN NIGERIA 2016

Funke Akindele is definitely one of the most famous people in Nigeria at the moment; she was ranked 10th in last year’s ranking.
OUR RESEARCH SHOWS:
Funke Akindele is still a well known entertainer in the country, her continuous appearances on billboards and TV adverts revealed she is one of the most popular faces in Nigeria. In our 2016 research we noted at least 80% Yoruba people know who Funke is. We discovered many Nigerians of other tribe know Funke Akindele either by name or facial recognition.
Funke is quite known by many Nigerian kids, youths and adults. She has managed to keep her no.10th position in this year’s ranking.

Mercy Johnson according to our research is the most famous actor in Nigeria. She was ranked no.8 in Nigeria in our 2015 ranking, but now she dropped.
OUR RESEARCH SHOWS:
Mercy is a very popular Nollywood actress who feature in a lot of movies which millions of Nigerians watch, Mercy is quite controversial both online and offline. Mercy’s face is quite a very popular one as she also features in many TV&Billboard ads too. Her name sounds familiar to many Nigerians and so is her face. Our research revealed Mercy is quite known both in the South and Northern part of Nigeria.

Known to be the G.O of the largest Christian ministry in Nigeria, pastor Adeboye was ranked no.5 in our last year’s ranking, well; he dropped to no.8 this year.
OUR RESEARCH SHOWS
Half of Nigeria’s population’s religion is Christianity and him heading the largest ministry in the country shows he is known by many Christians even ones that are not part of his ministry. We figured many Muslims know who Adeboye is too. The respected man of God is one of the most famous spiritual leaders in the country. Well, not known by many kids but known by many youths, adults and old ones.

The very popular Nigerian prophet well known beyond the shores of Africa has been featured on this list to be the 7th most famous person in Nigeria as of 2016. He is the spiritual leader of the Synagogue church of all nations which is located in Lagos Nigeria.

OUR RESEARCH SHOWS:
The minister, televangelist and prophet is well known by Nigerians in every part of the country. He is known by both Christians and Muslims in the country because of his prophesies and miracles. Prophet Joshua is one of the most influential and controversial people in Nigeria. He is well known by people that are not even religious.
He is not well known by kids but known by many youths,adults, and old ones.

David Adeleke popularly known as Davido has been ranked to be the 6th person on this list, he is a well known musician even beyond the shores of Nigeria . Was ranked no.7 in last year’s ranking.
OUR RESEARCH SHOWS:
The singer is one of the most famous music stars in the country at the moment. Mostly known by kids,youths and a few adults, the singer came into the music industry 5 years ago and he has managed to become one of the most famous people in Nigeria today. We discovered his music is being heard in every part of the country but majority in the southern part though. As of 2016 the singer is the most followed Nigerian person on social media. Davido’s face is quite a popular one too due to his popular music videos, TV and Billboard ads also.

The pop star Wizkid Ayo Balogun was the 6th on the list last year and he’s moved up to be at the no.5 position in this year’s ranking. Well, according to our research Wizkid is the most famous entertainer in Nigeria at the moment.
OUR RESEARCH SHOWS:
Wizkid keeps getting famous across the country, came into the spotlight in year 2010 and now he has managed to be one of the most famous people in the country through his music. Just like Davido Wizkid is mostly known by kids, youths and many adults too.
We discovered his name is quite a popular one, when we asked Nigerian that are not hip hop fans to mention hiphop singers they know his name comes first or second, in one other words we can say his name represents pop music in Nigeria. As of 2016, Wizkid is the most followed Nigerian person on Twitter.

Aliko Dangote Nigeria’s richest person for a very longtime is the second most famous person in Nigeria. Ranked no.3 last year moved up to no.2 this year.
OUR RESEARCH SHOWS:
The name; “Dangote” as a brand and personality is well known by almost every living Nigerian due to the reputation of being the richest Nigerian living or dead. He is mostly known by kids as a brand due to his name written on every product belonging to the brand; “Dangote”. We figured his face is not quite known to many but the name is. Dangote is well known by almost every Nigerian youth, adult and old ones.

Ranked to be the no.1 last year, Goodluck Ebele Jonathan is still the most famous Nigerian person as of 2016, the former president of Nigeria is still well known by every living Nigerian person on the planet.
OUR RESEARCH SHOWS:
The president’s name and face remains very well known by many Nigerians. President Goodluck led the country for over 5years and in 5years he became one of the most famous Nigerian leaders ever.
We figured Jonathan’s name, face and reputation is very well known by many Nigerians kids, youths, adults and old ones. The ex-president has remained relevant and controversial even after leaving office in 2015.