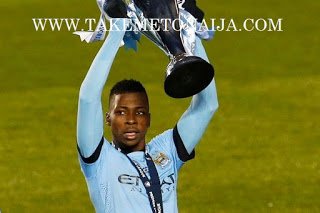 Iheanacho has represented Nigeria at youth levels from under-13 upwards. His first experience of a major international tournament was the 2013 African U-17 Championship in Morocco. For Iheanacho, the highlight was a hat-trick in a win against Botswana. He dedicated his goals to his mother, who passed away two months before the tournament. Nigeria reached the final of the competition, where they were defeated on penalties by Ivory Coast. Iheanacho was the second highest goalscorer of the tournament, behind team-mate Success Isaac.
Iheanacho played a significant role in the 2013 FIFA U-17 World Cup, where he won the “Golden Ball” awarded to the player of the tournament. Nigeria won the competition, in which Iheanacho scored six times, including a goal in the final, and provided seven assists. In the run-up to the 2014 African Nations Championship Iheanacho trained with the senior Nigeria squad, but was released from the squad in order to travel to England to sign with Manchester City. He was part of the Nigeria squad for the 2015 FIFA U-20 World Cup in New Zealand, and featured in two matche
CAREER AND LIFE

As a youth Iheanacho represented Taye Academy in Owerri. His performances for Nigeria in the 2013 FIFA U-17 World Cup led to interest from clubs in Europe. Teams following his progress included Arsenal, Sporting Clube de Portugal and Porto. In December 2013 Iheanacho travelled to England to discuss a move to Manchester City. He signed a pre-contract agreement with the club, stating his intent to formally sign for Manchester City on his 18th birthday in October 2014. In the interim, he returned to Nigeria. As the year drew to a close, the Confederation of African Football (the governing body for football in Africa) named him the Most Promising Talent of the Year for 2013 at the CAF Awards.

The young lad announced his arrival at the world stage the moment he netted four goals past Iraq in his match at the FIFA U-17 World Cup in the UAE last August. He ended up becoming the Most Valuable Player of the competition as well as the second highest goal scorer.  Kelechi and his team-mates from the beginning of the competition to the end stunned the world with their mastery of the game making Nigerians to now see them as the future backbones of the new Eagles Stephen Keshi was helping to mould.

This prompted the NFF and the sports minister, Mallam Bolaji Abdullahi announce that the boys would be groomed to becoming great materials for the senior national team by ensuring they don’t jump into wrong hands masquerading as agents of clubs around the world.
However, signs that some parents of the players would mislead the boys because of their greed came to the fore in a hilarious chat the NFF president, Alhaji Aminu Maigari and the sports minister, Mallam Bolaji Abdullahi had with one of the parents which veteran sports journalist and CAF/FIFA match commissioner, Paul Bassey published in his column in the Vanguard 2013


Every plea to the parent that his child would be guided to stardom so that the money he is earnestly yearning for will roll in effortlessly fell on deaf ears as he was interested in how much the various governments, local, State and Federal as well as companies and individuals were ready to splash on the players, because as he claimed, he spent a fortune preparing his son to be the good player he turned out to be for the benefit of the country.

Then came the supposed ‘scramble’ for Kelechi and the swiftness with which his father turned a football coach, agent and manager. It is not on record that he had ever done those jobs to be an expert in offering a positive advice to his son.
Those who should know, from Kelechi’s coaches like Nduka Ugbade and Emmanuel Amuneke and ex player of note, Victor Ikpeba, advised that the boy should not be rushed into Europe, especially to Manchester City football club but allowed to hone his skills in lesser clubs in either Belgium or Holland and the senior Iheanacho and the agent would have none of it.

Keshi magnanimously invited Iheanacho and two of his team-mates, goalkeeper Dele Alampasu and Taiwo Awoniyi into the Super Eagles Team B preparing for the CAF African Nations Championship, CHAN holding in South Africa in January and they were already warming their way into Keshi’s with their mature display at training.

In 2014, Iheanacho signed for City. Before the 2014–15 season, Manchester City visited the USA on a pre-season tour. Though still not formally a Manchester City player, Iheanacho joined up with the squad. He played and scored in the first match of the tour, a 4–1 win against Sporting Kansas City.,[ and scored again against AC Milan in a 5-1 win. After the conclusion of the tour, Manchester City arranged for Iheanacho to train with Columbus Crew until mid-October. In July 2015, he was also included in City’s pre-season tour team in Australia
Delays in obtaining a work permit meant Iheanacho was unable to play in England until February 2015. He made his debut at under-19 level in a UEFA Youth League match against Schalke 04, but was injured after only 11 minutes. After his recovery, he began to represent Manchester City at both youth and under-21 level in the latter part of the season. He played in the FA Youth Cup final, where he scored, but ended on the losing side after Chelsea claimed a 5–2 aggregate victory. The following week he scored the only goal as Manchester City beat Porto in the final of the 2014–15 Premier League International Cup.