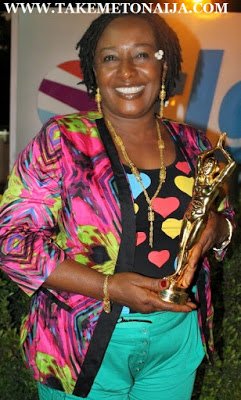 INTRODUCTION
Patience Ozokwor is an award winning popular Nigerian actress who came into the Nollywood movie industry in 1999 and have since then become one of the most prolific actresses in Nigeria today. She is often known to play bad roles in movies. She has featured in over 200 movies as of 2016. She is also popularly called; MAMA G.

Ozokwor was born on 25 March 1958 Ngwo, Enugu State. Madam Ozokwor caught the bug for acting during her school years when she played the role of Hamlet in Shakespeare’s classic drama, Hamlet in an all girl’s school. Hamlet was received so well, Patience started travelling with the show.

Married at 19, Patience continued to seek an education and took teaching courses at a Women’s Training College. After receiving her teaching degree she taught for 4 years. Seeking something more in life, Ozokwor left teaching to go into broadcasting where she was a radio announcer and newscaster. She worked at the station until it closed down. Undeterred, she went on to another broadcasting facility where she began to do radio dramas. She excelled. So successful was Patience in her career in radio drama she decided to give back to others. She opened a school to help young female school dropouts. She taught the girls hair and skin care.

She was able to help these young ladies open their own businesses. Madam Patience Ozokwor was so successful at aiding these young entrepreneurs the government sponsored her project. It was only a natural progression that her civic involvement would lead to a political appointment. She was the Assistant to the wife of the Mayor of the local government. She served in this political post for four years. As a result of her husband’s illness and later passing, Patience concentrated on her family while returning to school to learn graphic arts and mass communication for the next.

In order to earn money she baked cakes and took on odd jobs. This was a hard period in her life as she struggled to maintain her family and household finances. Unfortunately, there was not enough money to continue school. Eventually, she was invited to do a commercial by a comedian who was impressed by Patience s acting skills. As a result of the commercial, she was asked to do a soap opera entitled Someone Cares, a program about rural women, for the National Television Authority.

Afterwards she began to audition for acting roles, at first small ones and then larger and larger roles, until her career was launched. After her first movie in 1998, she was already being recognised by people. But when she did Authority (1999), the movie became very popular and it really shot her into limelight. After Authority, she has been moving from one movie set to another by the grace of God.

Patience Ozokwo went on to star in movies playing wife and mother roles. She has played the role of a mother to almost every prominent actor in Nollywood. She usually jokes with Olu Jacobs. She tells him that “It is only him and Pete Edochie that have refused to let her play their mother.”

Patience was among 100 Nigerians honoured by the government to celebrate
the amalgamation of the northern and southern protectorates in 1914.

Patience talks about her early days as an upcoming actress:
During my early days, sometimes when I get to location with a script,
they would tell me someone has taken my place, which was so
disappointing. But I endured and believed God for mine, and He gave me
what belongs to me. Today, God has celebrated me as an icon and I give
God all the glory.

Speaking about her life as a widow:
Patience said it’s been God because without him, she can do nothing. She said her husband’s family loves her so much and they are very fond of her, adding that she wished her husband were alive to witness her Centenary award, because he was highly supportive of her career.

She revealed she has three biological children but because of her love for children she adopted five other children who bear her name.
On what she really misses about him?
I miss the togetherness, when two people work together trying to train the children, bringing them up in unity and love. And all the affection he showered on us. I miss the way he celebrated my children’s birthdays, he was a true father and husband when he was alive. I miss my husband’s companionship and love.

SPEAKING ON HOW SHE LIVE HER LIFE AS A CELEB:

Are you saying you still live in the village?
I don’t live in the city; I still live in my village. It is nice to live
in the countryside where everyone is everybody’s business. (Laughter).
Not minding the fact that you are a celebrity?
If you see the way people appreciate me in my village, whenever I go to
the market to shop everyone will be calling me ‘Mama G’, ‘Gee’ for
general, in fact, you will appreciate me more. But my office is located
in Enugu town. So, I enjoy living in the village, my hometown. I still
live my life of simplicity regardless of fame.
How do you manage to shuttle from the village to other parts of the country?
I have a guesthouse in Lagos where some of my jobs are concentrated like
soaps, endorsements, commercials and shooting of movies. I have a three
bedroom flat in Asaba. Because I am tired of staying in public hostels,
some are sub-standard; and sometimes you run into small girls that you
know. So, I decided to rent an apartment each in Lagos and Asaba for
comfort. I have adopted children who I take on holidays, so because I
would not like them to grow up in the village without being exposed to
city life, when they are on long vocation and I am in Nigeria, I take
them to Lagos or Asaba for a change of environment.