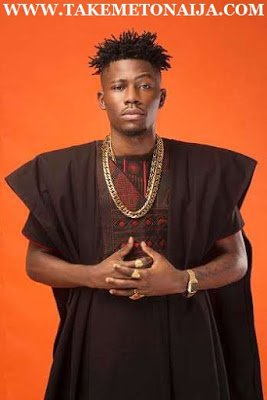 INTRODUCTION
Ycee is a Nigerian rapper who raps in Pidgin English, English,and Yoruba language he came into limelight in 2015 with his hit song “Jagaban”, Ycee is a 200L student of Unilag as of 2015. Won Headies Rookie Of The Year Award at the 2015 headies.

YCEE was born in Festac Town, a town in Lagos State, Nigeria, where he completed his basic education
at Dr. Soyemi Memorial Nursery and Primary School. He went on to
complete his secondary education at the Nigerian Navy Secondary School
in Ojo. He is currently studying Marine biology at the University of Lagos .
SPEAKING OF HIS PARENTS BACKGROUND:
I am a Lagosian. I was born in Lagos, I have lived in Lagos all my
life, but I grew up on my mum’s side. My mum is not much of Igbo like
that. She grew up in Lagos too so she speaks a lot of Yoruba. Growing
up, I was like I had been to there and here. I could say I got a bit of
two different experiences from the two backgrounds.
Ycee is a product of a Yoruba father and an Igbo mother all grew up in Lagos.

Professionally he started music in 2012, between June and July, just
before he got signed to his current label.
In 2012 he was busy doing
underground stuffs like freestyle, mix-tapes and all that. Along the
line, his current CEO got some of his music. He listened to it and liked
it, and he was just coming into entertainment at that time so his boss
approached him and said if he was serious about taking music as a career
he would sign him on and push the music the way it should be done.
Since
that was basically what he was looking for at that time, he agreed.
Ycee revealed between
2012 to this time he has released quite a number of singles from songs like; Smile
At Me Back, to Pass Me and other songs. He took time off music when he
gained admission into the University of Lagos.

Condo is basically his come back song.  After he took a long break from music
because of school “I had to come back with a bang!!” his words. He revealed Patoranking is
like a big brother to him so it wasn’t so hard for him to get Patoranking on the song, him and his label chosed to
put out Condo first because it’s his favourite.
The song “Condo”was nominated in the “Best Collaboration of The
Year” and “Best Music Video of The Year” categories at the 2015 Nigeria Entertainment Awards. On 20 July 2015, he released a single titled “Jagaban” which received massive airplays and made him more popular among music critics, including Olamide who asked to be featured on the remix. His career further hit the limelight after he was nominated for Revelation of the Year at the 2015 edition of the MTV Africa Music Awards, as well as earning a nomination in the “Best Artist in African Pop” category at the 2015 All Africa Music Awards.

Speaking on his hit song Jagaban:
When I recorded the song I just recorded it
because the producer came up with the beat. With that kind of beat I
just had to be aggressive. Judging from the texture of my voice and with
the aggression that was in that song a lot of people likened me to
Olamide. I am not saying it’s a bad thing, but that my work is being
recognized one way or the other. Then Phyno, I think it’s because if the
Igbo accent that is why a lot of people want to liken it to his style.
Well, it wasn’t intentional. It was how I was feeling that day and the
way I attacked the song.
On the song’s remix with Olamide:
He heard the song and liked it. He went on Twitter to ask if I would
love to do the remix, he would love to be on it. And I didn’t waste any
time before I answered yes.
When Asked:
If you were not doing music what would you be doing?
If I wasn’t doing music, I would be playing football.
So you are a good footballer?
Yes, I was a good footballer when I was playing football all the
time, but there is a big question mark on my fitness right now as a
footballer. But if I wasn’t doing music, trust me, I would probably be
in one academy somewhere trying to be the next Ronaldinho or Messi.