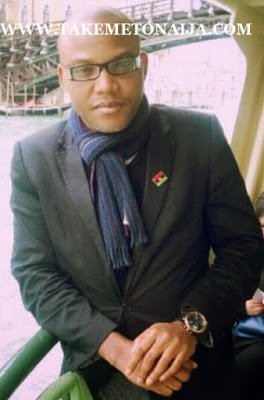 Kanu is a political activist based in the United Kingdom. He is a leading member of separatist organization Indigenous People of Biafra (IPOB), and the director of London-based radio station Radio Biafra.
He is known to many Nigerians as a not very good citizen, while many Biafran supporters believe he is their hero and leader.
He was arrested in 2015 by the Nigeria  DSS which lead to his immediate fame across the country, his arrest caused massive protest in different parts of the country and he was later released few months after.

Kanu was born in Isiama Afara, Abia State, Nigeria. His father is HRM Eze Israel Okwu Kanu (JP) and his mother is Ugoeze Nnenne Kanu. He attended Library Avenue Primary School (now part of Government House, Umuahia) and went to Government College for his secondary education. He later gained admission to the University of Nigeria Nsukka (UNN), where he could not finish due to incessant strikes before he left for London to complete his tertiary education.

He is a political activist based in the United Kingdom. He is a leading member of separatist organization Indigenous People of Biafra (IPOB), and the director of London-based radio station Radio Biafra.
In the early part of 2013, he visited and made the first broadcast of Radio Biafra from Nigeria. Using his laptop, Internet and other de­vices, he hooked onto London studio and broadcast to the world, he later boasted.

Nnamdi Kanu says delegates at the ongoing National Conference should negotiate for a secession of Biafra or face the wrath of the Igbo people. He said inasmuch as he respects the freedom of people to converge and speak their minds, the right of the people of south-eastern Nigeria to form their own nation should also be respected.
Speaking in an interview with SaharaTV’s Rudolf Okonkwo over the weekend, Nnamdi Kanu posited that the national conference is a waste of time since the same people who created the problems of Nigeria are the ones converging ostensibly to seek a solution. He slurred the delegates representing the Igbo people and threatened them not to return to Igboland if they fail to negotiate a secession from the Nigerian federation.

SEE FULL REPORT OF SAHARA REPORTERS INTERVIEW REVEALING HE’S MOTIVES AND BELIEFS
“If they fail to give us Biafra, Somalia will look like a paradise compared to what will happen to that zoo. It is a promise, it is a pledge and it is also a threat to them” he portended. “If they do not give us Biafra, there will be nothing living in that very zoo they call Nigeria; nothing will survive there, I can assure you” Mr. Kanu added.

He further alleged that the governors in Igboland are lackeys of ‘Hausa-Fulani godfathers’ appointed by them to do their bidding. He was particularly critical of Imo State governor Rochas Okorocha who he accused of singlehandedly islamizing the state. “Every Igbo governor you have has a Hausa-Fulani godfather”, the broadcaster said.

Mr. Kanu also slammed the idea of a peaceful approach to gaining a Biafran independence saying peace never works in the fight for liberation. “I do not believe in peaceful actualization or whatever rubbish it is called. I have never seen where you become free by peaceful means” he suggested. He said statistics available to him indicates that over 98% of Igbos support a Biafran secession because every Igbo has freedom embedded in their DNA.

He complained that the structures for negotiating an independent Biafra does not exist thus leaving them no choice but to resort to the current approach they are embarking on. He therefore lent support for the attack on the Enugu State Government House recently, which was claimed by the Biafra Zionist Movement. “Anybody that can do anything to disrupt the present orthodoxy of governance by a group of very corrupt cabals is welcome” he said.

Biafra was the name given to the secessionist state in the south-eastern part of Nigeria from May 1967 to January 1970, when natives of the region led by Chukwuemeka Odumegwu Ojukwu opted to break away from the Nigerian federation. After two and a half years of a bitter war which claimed the lives of an estimated 1 million people however, Biafra was reintegrated into the Nigerian federation. The inhabitants of the region are loosely referred to as Igbos, Ibibio-Efiks, Ijaws, Ogojas etc. but anthropologists point to a complex inter-relationship of several other ethnicities all connected by common ancestry.

On October 18, 2015, it was reported that Mr Kanu had been arrested in Lagos State by Nigeria’s secret police the Department of State Services (DSS). Mr Kanu had told his solicitors that he was, on 14th October, 2015, arrested by the agents of the Federal Government of Nigeria, the State Security Service (SSS) in his hotel room i.e. Golden Tulip Essential Hotel Ikeja, Lagos State. The solicitors in a press briefing said, between 14th and 17th October, 2015 their clients where about were unknown until 18th of October, 2015, when the Press Media broke the news of his arrest and detention by the SSS in Abuja. The news of the arrest of Mr Kanu generated mass protests across parts of Delta State, Enugu State, Rivers State, Cross River State, Abia State, Imo State, Akwa Ibom State and Anambra State.

On October 19, 2015, it was reported that Mr Kanu had been granted bail after a secret arraignment at Magistrate Court,Wuse 11. However, the bail seemed “controversial” and there were claims the DSS announced the bail only “to calm the angry people of Biafra”. Although the bail conditions were stringent some of which required the Certificate of Occupancy of a landed property within Abuja municipality, a level 16 officer in the Ministry, Mr Kanu’s lawyer said they eventually met the requirements in full. However, “upon the issuance of the Form 36,the court ordeal went to execute the order but came back unsuccessful. He was unable to produce the prisoner. The lawyer, Vincent Obetta, called the continued detention of the activist despite meeting his bail conditions “a clash between judiciary and executive” in a democratic Nigeria. According to Mr Obetta, “I have not seen or heard any place where a court grants bail and the person is not released. Under UN and Africa charter, it is enshrined that once bail is granted, you release the person upon meeting the bail conditions. We are sliding to days of Decree 2 and 4 of 1984. This is pure Dictatorship.”


A Conservative minister said the British consular officials will visit Mr Kanu following enquiry from the activist’s constituency MP, Harriet Harman. James Duddridge, Minister for Africa and the Caribbean confirmed that Kanu, had been visited earlier by members of the Foreign and Commonwealth Office but that he did not ask for British consular assistance.

On 5 September 2015, Mazi Nnamdi Kanu was a guest speaker at the World Igbo Congress which was held in Los Angeles, California where he demanded for guns and bullets as the video depicted.[
On 20 October 2015, Vanguard announced that Kanu had been released on bail. However, media sources supporting the objectives of IPOB called the bail “controversial” and claimed the DSS announced the bail only “to calm the angry people of Biafra”.

Discharge and Release
On Wednesday, 16 December 2015, Mazi Nnamdi Kanu was discharged by the Magistrate of Chief Magistrate Court, Wuse Zone 2, Abuja, Shuaibu Usman, on all counts of criminal conspiracy and ownership of an unlawful society filed against him by the Federal Government.
The judge, who held that government has dropped the charges against Kanu, said, “The accused person is hereby discharged and the case struck out.”
The federal government through its agent, the Department of State Services (DSS), opted to withdraw the case at the lower court and moved to higher court, which has jurisdiction to handle terrorism related cases.

The Federal High Court in Abuja on Thursday, 17 December 2015, granted the leader of the Indigenous People of Biafra, Nnamdi Kanu, bail, the News Agency of Nigeria is reporting.
Ruling on his bail application, Justice Adeniyi Ademola, said Mr. Kanu, who is the director of pirate station, Radio Biafra, should be released unconditionally while the case against him continues.
Jubilations in Enugu, Onitsha and other cities were ongoing for the rest of the day.