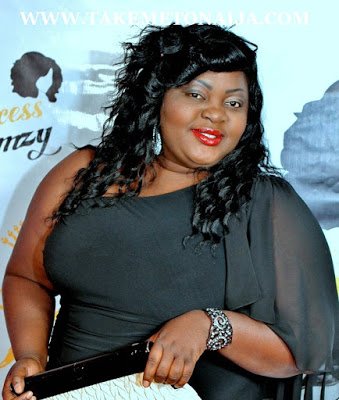 Eniola Badmus is a popular Nigerian actress, she shows in Yoruba and Nollywood movies. She is often categorized as a comic actress and she is well loved by her fans. She has won different awards and has produced movies of her own, she is no doubt one of the most famous actors in Nigeria.

The busty actress was born in Ijebu Ode, Ogun state, of Nigeria, she is one of the well educated Yoruba actresses around as she attended her primary and secondary school education in her hometown.
She attended Maryland Convent School, Air Force Primary School and Adeola Elementary School in Ijebu Ode, Ogun State for her primary education. For her secondary education, she attended Anglican Girls Grammar School in Ijebu Ode. Eniola is a Graduate of Theatre Arts from the University of Ibadan, Oyo State, Nigeria; she also holds a Second Degree from the Lagos State University (LASU)
In an interview she mentioned;
“I went to series of primary schools. I started with Maryland Convent School and I left for Air Force Primary School and then to Adeola Elementary School in Ijebu Ode, Ogun State, after which I went to Anglican Girls Grammar School in Ijebu Ode and then I had my first degree at the University of Ibadan where I studied Theatre Arts and later I went to Lagos State University for my second degree, which I have just concluded. My parents were neither poor nor rich but we were comfortable and I mingled with all sorts of people and that helped me grow up well. I am from a polygamous home and I am the 12th of my father’s children and I am the last born of my mother. I am an Ijebu girl with an Egba mother.”

According to her; when she first told her parents she wanted to act they totally disagreed and all they wanted for her was to go to school, come out and get a good job. But she told them she will do better in the movie industry. Even while she went to location way back then, they will be looking for her. When she gets home, it is either one problem or the other. It got to a point She doesn’t tell them she is going to a movie location. Her mother in particular never wanted her to be an actress. But shortly after, she started supporting her. That was in 2003. Not full support though. “They were like let’s see what she can bring out of it”. They did not want her to do it.
In her words;
“But thank God that today my father understands that it is what I love to do and he allowed me to do what I love doing. My mum is late now but before she died, she supported it and gave me words of encouragement.”

She is from a polygamous home, the 12th of her father’s children and the last born of Her mother.

She joined the industry 13 years ago. That was through a man called Bolagade Akinpelu (aka Ogumajek) and she actually started with the English sector before she started acting the Yoruba movie. She has been in the industry since 1997.

Eniola Badmus has featured in so many English and Yoruba movies, she is one prolific actress that finds it easier to switch between English and Yoruba movies but she doesn’t play the “gentle girl’ roles . Eniola’s raw talent to act as a trouble maker in movies seem to be her natural talent , she , started acting stage plays while she was still in the University and it was not too long for her to get her first major role in a movie after her first graduation.

Eniola Badmus movies include; Jenifa, Return of Jenifa { shot and released in 2008}, Blackberry babes, Return of Black berry babes, Omo Aridunnu, Omo Ghetto, Mr. and mrs Ibu parts 1&2{ all shot and released in 2008}. Some of the English movies where Eniola has featured include; Brutal Time and Love Affair. Jenifa and return of Jenifa are two of the best-selling Yoruba movies of all time, each of these movies was reported to have sold over a million copies each, it was produced and directed by another prolific Nollywood actress – Funke Akindele.

Speaking On Her Fashion& Make Ups
When I am not going out, I don’t wear make up. But I am a very colourful person and I like colourful things. In the whole of the make up, my favourite is the eye shadow. I really take my time to wear it. You know I am big but I am not fat so I try to make my face as attractive as I can and I play with colours, especially the bright ones. Where I am going determines the kind of make up I wear. If I am going for corporate business, my make up will be calm. When I am going for show business, I wear the make up that says flaunt it if you got it.

Speaking On Her Size;
Have you ever thought of losing weight?

Why is this my being big an issue to people? Okay, everybody has
to be very very slim, right? In the US they don’t discriminate like this
o, it’s only in Nigeria people get worked up about being overweight. I
understand it is not healthy to be overweight at all, but should it be
an issue as a lifestyle?
Speaking On Relationship
Are you currently in any relationship?

I just like a regular guy that has talent, even if he does not
have talent, he has to be intelligent. A regular man, an average man;
but please no body odour and no mouth odour, such are very important to
me.

Eniola Badmus has had her own fair share of some Nollywood
controversies.

Eniola Badmus has not been linked with any male in and
out of the movie industry, she prefers to hang out with her clique of
friends and she also enjoy travelling and sight-seeing and keeps her personal life private.WHAT ENIOLA LIKES TO DO:
Eniola is someone who likes to chill a lot, like to just be in her house watching TV,
reading novels and watching her other jobs she’s done that came out and
try to correct her mistakes. She is always in her friend’s house when she is not
working; She likes to chill with her friends and family because that’s the
only time she has with her people.

AWARDS AND ENDORSEMENTS
Has won quite many awards which include;
‘The Best Actress 2014 at City People Awards’.
Won the Giama awards in 2015
And also an international award; won the Best Actress in Africa Award at the BEFFTA 2015.

CONTROVERSIES
The actress has no actual scandal associated with her