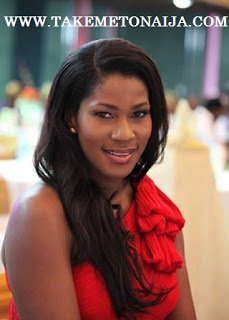 Stephanie is a Nigerian actress, film director and model. She has received several awards and nominations for her work as an actress, She was also the runner up for the Most Beautiful Girl in Nigeria beauty pageant of 2002.In 2011, she was honoured by the Nigerian government with a National honour (Member of the Order of the Federal Republic, MFR)

The sixth child of eight children, Stephanie was born in 1980 in Benin City. She started her acting career while a student studying English and Literary studies at the University of Calabar (UNICAL), acting in two Nollywood films Compromise 2 and Waterloo, followed by her role in director Teco Benson’s blockbuster film Terror.

In 2002, she became a household name in Nigeria for her sterling performance in the movie Emotional Crack, which earned eight awards and was screened in 2004 at the African Film Festival in New York. Okereke went on to win the 2003 Reel Awards for Best Actress English and Best Actress of the year.
Already during her teenage years in 1997 she starred in two Nollywood movies, Compromise 2 and Waterloo. During the 2002 Most beautiful girl in Nigeria beauty pageant Okereke reached 2nd place.

In April 2005, on her way to the African Movie Academy Awards held in Yenagoa, Bayelsa State, Nigeria, Okereke was involved in a serious car accident that left her with burns all over and a broken leg. She recovered speedily from the accident and went back to acting.

Since Emotional Crack, Stephanie has never looked back, starring in over 100 films so far. In 2006, she won the Afro-Hollywood Award, and the Film Makers USA Award for Excellence, followed by the Miriam Makeba Award for Excellence in 2007, and the Beyond the Tears Humanitarian Award in 2008 for her work against rape and Vesico Vaginal Fistula (VVF).Okereke took a break in 2008 to study film at the New York Film Academy at Universal Studios, Los Angeles. She produced her first Hollywood/Nollywood feature film, ‘Through the Glass’, which premiered in October 2008 at the Pacific Design Center in Hollywood, California, and won the Recognition Award from the California State Legislature and the City of Carson for film. The movie ‘Through the Glass’ also had a market screening at the Cannes Film Festival in 2010

After the success of her first movie, Stephanie has dedicated time in working on her second film. Titled ‘Dry’ the movie will focus on VVF – one of Stephanie’s core interests which has seen her meet and dine with first ladies across the country as they all fight towards saving the dignity of women. Over the years, she has been nominated three times at the prestigious AMAA awards.

In 2009, Stephanie joined forces with DEL -YORK International a media and marketing communications company in bringing the prestigious New York Film Academy (NYFA) for a one-month intensive workshop to train and inspire young Nigerian filmmakers in 2010. Same year, she was featured in the CNN documentary – 50 years of Nigerian Independence and performed alongside Meryl Streep at an exclusive stage reading of the play ‘SEVEN’ at the Hudson Theatre in New York as part of the Women in the World Conference, opened by US Secretary of State, Hillary Clinton. For Stephanie, however, what drives these immense accomplishments has been a burning desire to empower and represent women in the best light possible, a personal brand Ambassador for Nigeria; this vision inspires and drives her in all of her work as an actress, film director, entrepreneur, activist, model and style icon.Not done yet, she is spreading her tentacles, engaging in new fields that exhibit her versatility and prowess. Her online magazine self-titled, Stephanie, is about to take off.

With hundreds of thousand fans on facebook, the medium will serve as a platform for her fans to relate with her, share in her thoughts and opinions on various issues. With that platform she will be building a community where she resides with the people who share certain passions and ideals with her. The industrious entrepreneur still has a lot up her sleeves – her perfume is being processed in France and is one of the projects lined up for the year 2011.

A true embodiment of purpose, dedication and success, Stephanie will continue to inspire Africans all over the continent and beyond. Her International recognition is only the beginning of her goals for her brand, her passions and her country. Her ability to command the screen and capture her audience in every roles she plays has placed her in Nollywood as an A-List Superstar. Stephanie is currently Co-founder of Del-York international a media and marketing communications company, with services ranging from advertising, film production, events planning, digital designs and broadcast communication. In the spring of 2009 for the first time in history an African company brought the New York Film Academy to Nigeria, Africa for a one month crash course to help inspire the next generation for Film industry directors, actors, producer e.t.c. For more information please visit www.delyorkinternational.com. Stephanie is not only taking over Nollywood, but hoping to train and inspire the next generation of actors and actresses. The best is yet to come.

Okereke was married (2004-2007) to a former Super Eagles football player Chikelue Iloenyosi, a marriage which a high court in Lagos in 2012 has declared null and void, because at the time they got married, Chikelue was already legally married to another woman in the US.

In April 2012 Okereke married Linus Idahosa in Paris, France, at a private wedding ceremony that was attended by members of her family and scores of Nollywood actresses and actors.

AWARDS AND ENDORSEMENTS
She has multiple awards and nominations to her name;

ENDORSEMENTS
Signed a multimillion naira endorsement deal with  Kanekalon Nigeria limited in 2011
In 2013  Diva Sanitary pads, chose to unveil Okereke-Linus as ambassador a deal said to be worth millions of naira

RUMORS AND CONTROVERSIES
No scandal