Abisola Aiyeola  popularly known as Bisola, is a
Nigerian-British actress, singer, MC and presenter. She’s a voice over
artist and a one time TV host of Billboard Nigeria which aired on silver
bird television from 2011-2013. Her fame began when she contested in the 2008 edition of MTN
Project Fame, she became bigger after participating and being the 1st runner up in the Big Brother Naija 20117 TV show

Bisola is  beautiful, delectable & She is passionate. She is
brilliant and embarrassingly funny. Entertainment Nigeria should watch
out!  I introduce the Voice & Face of WFM 91.7 ABISOLA GRACE
AIYEOLA.
“Entertainment Nigeria watch for me!  I tasted the limelight in 2008
thanks to my singing talent  that landed me on one of the biggest
stages of musical talents competition in Africa; MTN project Fame west
Africa 2008, season 1, where I held my own into the last stage of the
competition as one of the last five.
I wanted more hence I found on TV as host of Billboard Nigeria
which aired on Silverbird television from 2011-2013. I love
entertainment and I’m gently edging my way into Nollywood Nigera having
featured in over 15 movies including  “Forever with us”, “President for a
day”, “The patient”, “The outlaws”, “Diary of a Nigerian couple” to
mention a few.
Though my “mama” birthed me in the UK, all i need to make you giggle is to connect to my environ on everyday happening.”

Abisola Aiyeola is one of the housemates in the 2017 BB
Naija house. She’s quite energetic, talented and well loved by fans of
the reality TV show. Bisola is lively and has a strong personality. She
can hardly go unnoticed. You either love her or hate her. Some even call
her the ‘Jenifa’ of the house.
Her fame began when she contested in the 2008 edition of MTN
Project Fame and this is what she have to say about how the competition
helped her; “Project Fame helped me in the movie industry. The first
director I got to work with was a D.O.P on Project fame. ” – Bisola
revealed.
“The first and second directors I worked with were working on
Project Fame, so, it did help.”nAbisola is part of the radio station WFM
91.7 (Nigeria’s 1st Radio station for WOMEN and their families).
Abisola says she was a spoilt child till age 8 when her then
well-off family hit some major hurdles. She had to move to rural Nigeria
where she lived with cousins selling make up and she got another shot
at the high life when she came fifth in a reality singing competition.
Bisola is one of the housemates in the 2017 Big Brother Naija
television shows. The multi-talented lady has always known how to turn
heads right from the first day she walked into the Project Fame audition
hall.
She still plies her trade in the entertainment industry, revealing
her comic side and using her voice to charm her listeners on her radio
show on Nigeria’s first Women’s radio station – WFM 91.7.
Bisola has also delved into the Nollywood industry, featuring in
movies like “The Life Of A Nigerian Couple” and “Forever With Us”.
A proud mother to a beautiful daughter and a success story to many.
She had to move to rural Nigeria where she lived with cousins selling
makeup and she got another shot at the high life when she came fifth in a
reality singing competition.
British born currently studying Business management at National
Open University of Nigeria is one of Nigeria’s budding Nollywood’s
finest.  Featured in over. She is one of the greatest mimics you will
ever meet.
Her enthusiasm and vast knowledge of the entertainment industry,
her She believes that “just because women don’t have as much physical
strength as men doesn’t mean they cannot take on as much
responsibility”.
She is a mother driven with everyday passion to make the world a
better place for her daughter, for every girl child and for every
child.
Her motto is to be happy always and live each day like it’s the last. She is ecstatic to be part of the WFM91.7 movement.
Fan-favourite Bisola was seen kissing Thin Tall Tony (TTT) as their
romance deepened and the internet has been going crazy over it because
Tony is allegedly married.
One person sure to attack Bisola was controversial Nollywood actor
Uche Maduagwu who questioned her morals and saying all sorts. He said:
“Most girls can’t even be loyal with their kisses, they will kiss almost
all the whole community and still tell you “I love you”.
Actor Uche Maduagwu’s post on Instagram.
He ended it with: “Don’t give all the good girls in Nigeria a bad
name with your unprotected kisses on National television.” His followers
on Instagram were defended her and told him to mind his own business.
Photos of TTT with his family have gone viral since and some people
are making jokes about his wife beating Bisola after the show. and
about her being a homewrecker.
The people defending Bisola say she most likely doesn’t know about
his marriage or family. What is surprising is, no one seems to focus on
the main culprit: TTT who is the married one and is still getting
involved with her.
It all went down last night after their house party. Thin Tall Tony
is a married man with two kids, Bisola has a baby girl. They kissed
endlessly without restraint and remorse before moving under  the duvet
and what looks like Bisola giving ThinTallTony either a blow or hand job
happened.

Bisola who was romantically involved with ThinTallTony while
in the BBNaija house, said that she does not see the need to have a
conversation with him as to why he hid the fact that he is married with
kids from her.

She had earlier addressed the issue during a briefing in
South Africa after she (Bisola) shockingly noticed and pointed out the
wedding band on TTT’s finger.

Reacting further, she said, “So I just found out that Thin
Tall Tony is married, has a family and in my mind I’m like, ‘dude, you
are one amazing actor.

“Good thing, I did not have it in my head that I was going
to come out and have a sort of romance with you; I hope your wife did
not deal with you too much.

“So, yes, Tony, I hope your family is doing great, well done
to you, to them, feel just a little betrayed that, we were really
close, come on, we shared a lot of things together.

“This one thing that you didn’t say, I don’t know why.
Anyway, it’s your choice, you played the game the best way you know how
to.’’

Thin Tall Tony who is married with two kids hid his marital status during his stay in the house before he got evicted. 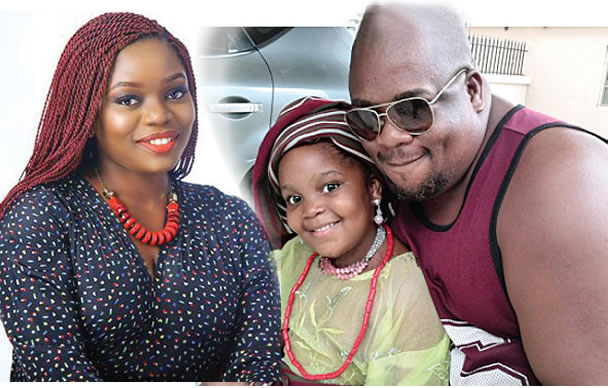 I have an amazing relationship with my daughter. In fact, she’s my friend because we talk a lot. I think she is one of the best children in the world. I and her father are co-parenting and we still have a friendly relationship. I cannot say if there is any chance that we could get married in the future, because life is unpredictable and one can never say.