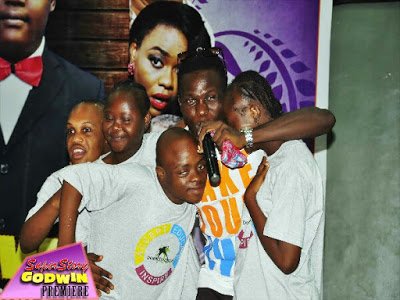 Superstory has premiered its new season, titled “Godwin”, which is trailblazing as it stars Solomon Omere: a multiple-talented 26 year old man actually living with Down Syndrome.

The event, which took place on March 8, 2017 at PEFTI Multipurpose Hall Ajao Estate – Lagos, had Nnenna as the MC and was well attended by several celebrities and other dignitaries who all enjoyed a comedic performance by wapTV’s Chief Olododo, a musical performance by F-Clef, and a dance performance by a beautiful group of kids living with Down Syndrome who were joined on stage by Solomon Omere.

Members of the Down Syndrome Foundation Nigeria (DSFN), including Mrs Rose Mordi – Founder and National President, Muyiwa Majekodunmi – Vice President and Administrator, and Mrs Susan Oyemade – Member of the Board of Trustees, were also in attendance; and Muyiwa Majekodunmi had this to say: “This has been a most humbling, heart-warming unpretentious evening. I’m really thrilled by the gesture of love and affection shown to people living with Down Syndrome. This was a powerful media event without the usual mask of plasticity! God bless Wale Adenuga Productions for this Superstory: Godwin project.”

Wale Adenuga Jnr., Managing Director WAP, stated that “One interesting thing about this production is that it is not about a person living with Down Syndrome begging for your acceptance; rather it is about a person with Down Syndrome excelling in life and fulfilling his dreams in a way that you will be the one craving his acceptance. We are really proud of this exciting and heart-warming story and we are pleased with the overwhelmingly positive response at the screening. Superstory: Godwin has landed; get enlightened and spread the message.”

According to the National Down Syndrome Society, 1 in 691 babies are born with Down Syndrome in Nigeria and Godwin is set to eradicate the prevailing stigma and provide more enlightenment on the disorder as the TV Drama employs Wale Adenuga Productions’ unique blend of orientation through Edutainment; which aims at educating viewers through a relaxed and enjoyable medium.