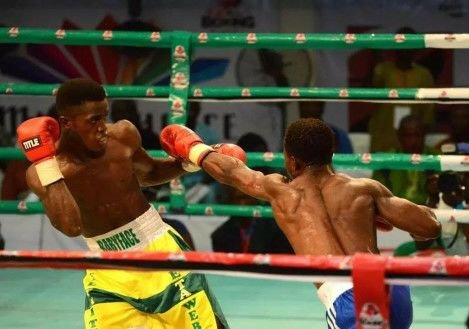 On a night filled with Technical Knockouts (TKOs), Lagos based youngster
and fast growing pugilist Rilwan “Babyface’’ Babatunde emerged the Most
Valuable Boxer of the GOtv Boxing Night 11, held at the Obafemi Awolowo
stadium, Ibadan on Sunday, March 26.

The
sensational boxer won the N2m prize money after he defeated Waliu
‘Oganla’ Arogundade in the fourth round to win the national light
welterweight contest in a total of 10 minutes.
Babyface pummeled his opponent heavily and floored him twice before the officials had to stop the bout.

ThisTrend
can also report that Ibadan rave of the moment Akeem Sadiku, popularly
called “Dodo’’ also knocked out Saka “KC Confidence’’ Kazeem in the
first round in the light middleweight contest. 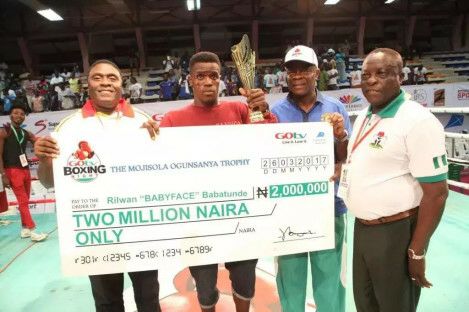 In
the national light welterweight bout, Vincent Essien was no match for
Ibadan born Olaide Fijabi known as “Fijaborn’’ who is well known in
Lagos.

Although their encounter was developing into a tough one
when Essien showed some flashes, but Fijabi rounded it off in the third
round with a deft punch to send Essien to the canvass – and that was how
it ended.

The major upset of the night was observed in the
national light heavyweight challenge between Kabiru “KB Godson’’
Towolawi and Adewale “Masevex’’ Masebinu.

KB Godson’s heavy blow
in the second round was enough to win the tie as Masevex’ manager
threw-in the towel after blood from his boxer’s face continued to spill.

The
biggest bout on the fight-card was however short lived when Nigeria’s
Otto “Joe Boy” Joseph wrapped-up the much anticipated West African
lightweight challenge in the first round when he defeated Ghana’s Ayitey
Mettle, to seal a night of explosive boxing.

Babyface who had
never won the prize money at the previous editions of the tournament
also took home the Mojisola Ogunsanya trophy, an award given to the best
boxer on the night.