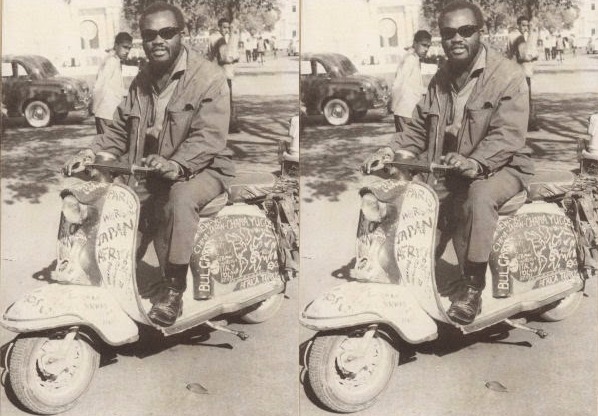 One of the foremost Nigerian icons of cultural history, the quintessential explorer. Europe had Christopher Columbus, Vasco da Gama, Ferdinand Magellan, James Cook, and Marco Polo, Asia had its Ibn Battuta and Zheng He and Africa had OLABISI AJALA. A very Nigerian man at heart and a proud African in soul, Ajala shattered all records of travel, voyaging into lands that no black person had ever seen not to talk of setting their feet there. Ajala had the world in his pockets and the world bowed at his guts. From the physical boundaries of nations to the piercing demarcations of racism, Ajala tore through them all. This is his tale.

BACKGROUND AND EDUCATION
Born Moshood Adisa Olabisi Ajala in Ghana to an African Muslim father with four wives, Ajala grew up in a large family. He was one out of 25 children. In his own words in his legendary book, An African Abroad, he said:
‘I was born in Ghana, of Nigerian parents, and brought up in Nigeria, where I had my schooling at the Baptist Academy, Lagos, and Ibadan Boys’ High School. At the age of eighteen I went to America to further my studies. My father, a traditionalist who belongs to the old school…’
Ajala’s initial goal was to study medicine and as a matter of fact, he was the first black student to be pledged by the Delta Upsilon Pi ‘fratority’, a co-educational Greek-letter organization at De Paul University in Chicago in January 1952 where he was a pre-medical student. He was so active that he was made the feature editor of the campus newspaper, the De Paulian. Ajala said at that time that once he became a medical doctor he was going to return to Africa to in his words ‘wage war on voodoo and other superstitions.’ He said he was proud of his 24 siblings, one of whom was a student in England. Ajala said: ‘The world should send doctors to Africa, and missionaries to Chicago. The gangsters here need converting much more than we do.’ He would never fulfill his dream of becoming a medical doctor as he stumbled on something far more enchanting.

BICYCLING ACROSS THE UNITED STATES
Fame came to Moshood Ajala in 1952 when he decided to embark on a lecture tour across the United States from Chicago to Los Angeles, all on a bicycle. Aged 22, Ajala set out on the 12th of June 1952 from Chicago on a bicycle tour covering an incredible 2,280 miles. He arrived the Los Angeles City Hall on 10th of July, two days ahead of his 30-day schedule. Upon arrival, Ajala was received by the city mayor Fletcher Bowron. While narrating his experience of the cross-country tour, Mr. Ajala said everything was generally fine and the only nasty incident was a time in Topeka, Kansas where he was jailed for 44 hours after the white YWMA refused him a room and called the police when he protested (kindly note that that was time when the United States of America was bitterly divided with segregation politics gaining ground).  A man not to be cheated, Ajala filed a suit against the Topeka YMCA and its secretary via the Nigerian ambassador in Washington. He was determined no one was going to mess with a Nigerian citizen and get away with it, not even a band of unruly Americans in Kansas.
But what was the purpose of his travel? Ajala was a psychology junior at the Roosevelt College in Chicago and his goal for the tour was to educate the American public on the progress made by his native West African country of Nigeria. The tour included stops to deliver lectures at 11 major cities. Ajala also did his tour wearing native Nigerian costumes described as ‘elaborately flowered robes with a felt-like head-dresses to match’, to which Ajala said:…will show and prove to Americans that we do not go about nakedly in loin clothes.’
Ajala also appeared on television and this was how he was described in Global Television Formats: Understanding Television Across Borders:
‘Perhaps even more significant for our discussion of the show’s global and local dynamics, however, was the participation of Nigerian contestant Olabisi Ajala, a sophisticated world traveller and secretary to his country’s prime minister. Olabisi was an attractive and charismatic black man who held a degree in psychology from Columbia University and was an expert in ethnology, the subject he chose for Lascia o Raddoppia? Olabisi recurrently appeared on TV wearing traditional Nigerian clothes, and he managed to transform every night on the show into a celebration of his ethnic and cultural heritage. The final night however, Olabisi entered the TV studio wearing an impeccable tuxedo, while Mike wore the traditional Nigerian costume, demonstrating once more his ability to interact with his contestants’ most genuine aspects of identity, be it regional, Italian or foreign and ‘Other.’’

AJALA THE ACTOR
Following his daring bicycle trip across continental United States, Ajala became the darling of many. Newspaper journalists besieged him and he was made a celebrity overnight. Deals, endorsements and contracts came flying at him. One of such was the movie contract he signed with Eagle-Lion Studios in Hollywood in August 1955, the deal involved making a series of drama and spy films with European and African backgrounds.
After his deportation from the United States, Ajala proceeded to Canada and spent nine months perfecting his acting skills. It was while he was there that he starred in the stage play Lost In The Stars. 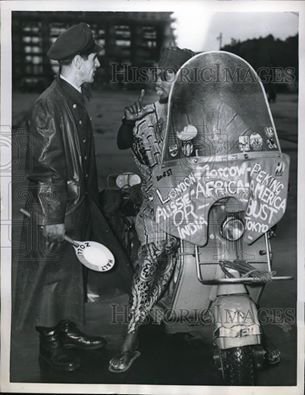 BRUSHES WITH AMERICAN LAW AND THE DEPORTATION
A free-spirited individual known for crashing into movies amongst other interesting ways of expressing his liberty, it was not long before Ajala surfaced on the American security radar. In July 1953, things had taken turn for the worse for Ajala. But what happened?
In March 1953, the police of Beverly Hills, California arrested and jailed Ajala on three felony charges. He was accused on one count of forgery, two grand theft and three, worthless cheque charges. To add to his trouble, he had also been sued by a former Chicago nurse for refusing to accept paternity of his child. Back to the forgery case, specific charges against Ajala indicated that he made attempts to work a ‘bunko’ game by opening a savings account at a branch of Bank of America under the fake name of ‘Edward Hines’ then made deposits at other branches with worthless cheques. Officials said Ajala made five of such phony deposits of about $450.

Actor Moshood Ajala in court with attorney Elias Powell during the forgery case.He was eventually found guilty of forgery and deported from the United States of America, he was aged 24, an exchange student from Africa and an actor. Ajala was not really deported solely because of the grand theft charges (to which he pleaded not guilty before Judge Orlando H. Rhodes), he became a subject of deportation also because he failed to maintain his studies at the Santa Monica Junior College, thus invalidating his visa. For the forgery and grand theft charges, Ajala pleaded not guilty saying with all firmness and seriousness that he was duped by Arnold Weiner, a white male ex-bank accountant. Weiner said while it was true that he showed Ajala how to write cheques, he did not dupe him in anyway.
However, it must be stated that Ajala’s deportation was not without drama. After he was convicted of passing bad cheques in Los Angeles, Ajala was ordered by the American authorities to be deported to England from Ellis Island, New York but Ajala resisted and you kAjala Travel, Africa’s Most Famous Travellernow what he did? While awaiting deportation at the Terminal Island in Los Angeles after he was given a one-year suspended jail term, Ajala climbed an 80-foot radio tower and threatened to kpayn himself (that means to commit suicide for my readers who might be raised on Banana Island and do not know what kpayn or kpef means). From atop the tower, Ajala screamed that he ‘would rather leap to my death’ than be deported. Mr. Ajala was on the tower for almost 24 hours while the immigration authorities pleaded with him. Finally, Ajala fell to the ground from a height of 15 feet. He was examined by doctor at the island’s hospital and they said all he suffered was just a sprained back. Immigration authorities said Ajala made the death threat because he feared what they called ‘tribal execution’ if he was packaged back to Nigeria. They quoted Ajala saying:
‘My father will kill me if I am sent back without completing my college studies.’
Immigration officials said Ajala dreaded tribal execution so much so that when the judge sentenced him to a one-year suspended sentence, Ajala dropped to his knees two times and touched the floor with his forehead saying he was ‘calling on Allah’ to bless the judge for the ‘mercy’ shown as the sentence might just save him from execution back home in West Africa.
When Ajala noted that his protest at the order of the immigration authorities did not work, he embarked on a 30-day fast which was the immigration officials translated it to mean a hunger strike to stop his deportation while Ajala insisted he was simply observing his Ramadan fasting as dictated by his Islamic faith. Whatever the case, Mr. Ajala was deported and gallantly flown to London. Immigration officer Justin Bennett confirmed his deportation without any fear of any execution and also stated that Ajala’s request to be sent to Canada was rejected because Canada has refused to approve his application.
Upon arriving in the United Kingdom, Ajala said he was going to work on a new movie at the Ealing Studios in London and talked of his plans to return to the United States.
By September 1954, Ajala was back in the United States with his American-born wife, Hermine Aileen. He explained to reporters that the deportation order only banned him from stepping on American soil and his plan was to resume his acting career in California.

These included personalities like Sir Abubakar Tafawa Balewa who was Nigeria’s first prime minister, Marshal Ayub Khan of Pakistan, Golda Meir of Israel (she was the first female prime minister of the nation), Makarios III of Cyprus, Jawarhalal Nehru of India, Nikita Khrushchev of the USSR, the Shah of Iran (Mohammad Reza Shah Pahlavi), Gamal Nasser of Egypt, General Ignatius Acheampong of Ghana, Odinga Oginga, former vice president of Kenya and others. Ajala released a book titled An African Abroad documenting all his experiences on the trip, the book was supposed to be the first volume of a trilogy. In all, he visited over 85 countries with his scooter over a period of six years. See photos below: