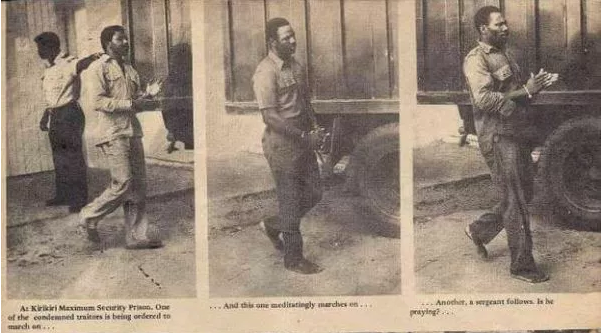 Here is excerpts from the 1976 coup, which is dubbed Dimka coup

This is Lt. Col. BS Dimka. I now explain why we
the Young Revolutionaries of the Armed Forces have found it necessary to
overthrow the six-month-old government of Murtala. On the 29th July
1975, the Government of General Gowon was overthrown. Some of the
reasons given for the change were:

c. Arrest and detention without trial

d. Weakness on the part of the Head of State

e. Maladministration in general and a host of other malpractice.

Every honest Nigerian will agree with me that
since the change over of government there has not been any physical
development in the whole country generally.

All we have is an arbitrary dismissal of innocent
Nigerians who have contributed in no less amount to the building of
this great nation.

A Professor was arrested, detained, dismissed and
later taken to court on an article which every honest Nigerian will
agree that all the points contained in that article were 100% truth.

The sad point about it all is that those who initiated the retirement or dismissal exercise are the worst offenders.

You will be informed about the ill-gotten wealth in my next announcement.

The acting General Manager of the Nigerian Airways was invited to the Dodan Barracks and detained without trial.

The people of this country have been living in a state of fear.

The Armed Forces promotion exercise is still fresh in your minds.

Whatever reasons they have for the promotion one can only say that they are ambitious.

They, in fact, took over power to enrich themselves.

We are convinced that some of the programmes announced for a return to civilian rule are made to favour a particular group.

To mention only one. Maitama Sule is a politician. But has been appointed Chief of Commissioners for Complaints.

This is to prepare him for the next political head at all cost.

In view of what I have just said and a lot more
which time will not permit me to mention, we the Young Revolutionaries
have once again taken over the Government to save Murtala from total
disgrace and prevent him from committing further blunders and totally
collapsing the country before he runs away in the name of retirement to
enjoy the huge fortune he got through bribe which he has now stored
outside this country.

I believe that charity should begin at home.

Please stay by your radio for further announcements.
We are all together.