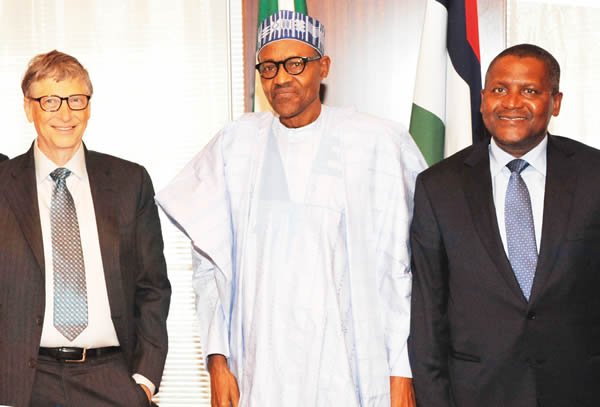 Africa’s richest man, Aliko Dangote, has been named by Forbes
Magazine among the most powerful men on the face on the earth in 2016.
President Muhammadu Buhari didn’t feature.

Dangote was named along other world leaders such as Russian
President, Vladimir Putin; American President-elect of the United States
of America, Donald Trump; and German Chancellor, Angela Merkel. They
were ranked along with 70 others.

Dangote has constantly featured on the list since 2013 when he was
listed as the only black African among 100 most powerful persons on the
planet.

At the time, he was listed as number 71 ahead of Donald Trump, America’s president-elect.

In the current list, 64-year-old Russian President Vladmin Putin is adjudged most powerful in the world, ahead of Trump.

Angela Merkel was ranked as the third most powerful person in the
world, and out-going American President, Barack Obama, placed 48th on
the list.

The Catholic Pontiff, Pope Francis, is the fifth most powerful
person, while the world’s richest person, Bill Gates, comes seventh.
Chinese President, Xi Jinping comes before the Pope in number four,
while the Facebook Founder, Mark Zuckerberg, is the number 10 most
powerful person in the world.