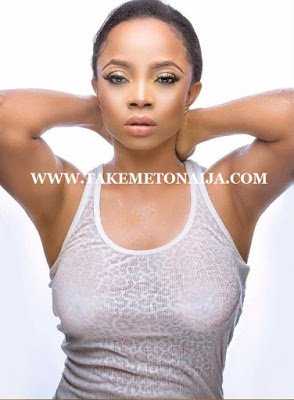 INTRODUCTION
Toke Makinwa is a Nigerian radio personality, television host, and vlogger.She is known for co-hosting The Morning Drive on Rhythm 93.7 FM and her YouTube vlog series Toke Moments.

Toke  Makinwa was born in Abuja but her parents relocated to Lagos . She is from a large family , second child out of four siblings. Interesting enough she started schooling at the age of 1 . So i csn say she is smart . She had her secondary education at Federal Government College ,Oyo State and majored in English language/Literature at the University Of Lagos .

Toke got back home after a while , got a job at Zenith Bank which i guess her parents would have been very excited about .But unfortunately and fortunately , her love for the media was in-separable and she refused to let that dream she has nurtured die .
Toke Makinwa is a lady that is known at least popular in Nigeria , A fashionista , party goer , and loves to live life .

She started her career as a radio presenter on cool fm in 1999 which was shortlived. In 2010 , Fate smiled on her as , her long lived dream of returning back to the radio scene came alive when she got a  job with Rhythm 97.3 fm as an On Air Personality .

She spoke more about her background in an interview below:

How and when did you get on to Radio?
“In 1999, Cool Fm had just opened and there was this teenage program that showcased the life of teenagers and topics that interest them like sex education, being good at home, being good in school and it was broadcast every Saturday morning. It was short lived because my parents didn’t think it was a career then, they didn’t even think it was cool being on radio.”

So you had some resistance from your parents initially…
“I got the job and I didn’t tell anyone at home. My Mum was driving in the car one day and she heard my voice on radio and that was it. She didn’t even let me resign formally because she didn’t allow me go back there. I just stopped. Sometimes I wonder how I was on the radio for four months without my Mum hearing of it. But one fateful day she heard and that was the last time I ever went into the studio of Cool Fm.”
What did you do afterwards?
“I went to the University but somewhere deep down inside of me, I always wanted to go back to radio. I loved how you could express yourself and have people listen to you so I thought of giving it another try but it didn’t come quite as I planned because when I was done with University, I packed my bags and moved to London. I wanted to pursue the entertainment career before I came back home but that wasn’t successful.”

She has a way of capturing the hearts and minds of listeners and viewers when she is on air . Toke was popular with her morning show – the morning drive ,where she gives her listeners a healthy dose of information and inspiration to start the day alongside her co-host.

In 2010, Toke Makinwa hosted the Most Beautiful Girl in Nigeria beauty pageant.

Toke Makinwa has anchored several programs on radio and television. She was
announced as one of the hosts of 3LiveChicks, an entertainment program which was initially launched for the web community alone but was later extended to terrestrial TV stations in late 2012 alongside with Tosyn Bucknor and Oreka Godis. She has featured Nigerian celebrities like Tiwa Savage, Tonto Dikeh, Bez and several others on the show on the show. Makinwa however did not renew her contract with Flytime TV for season 2, and was subsequently replaced by her radio colleague Omalicha.

In 2013, Makinwa became a brand ambassador of the United Africa Company of Nigeria(UAC) alongside Osas Ighodaro Dan Foster and Dare Art Alade. She also signed a multi-million naira contract with Nestle Nigeria to become the new face of Maggi.

Toke Makinwa was made host by Hip Hop World Magazine in January 2014, of their lastest show, Trending which kick started on February 14. While on the show, he has interviewed many celebrities, including Chiwetel Ejiofor, Eva Alordiah, Femi Kuti, OC Ukeje, Chidinma ans a host of others.
She has featured in many episodes of the program Moments with Mo as a guest Host on the EbonyLife TV Network.

Toke is very passionate about giving back, Ms Makinwa gets involved in a lot of charitable events as much as she can. In the month of February 2013, she posed alongside media personalities like Yvonne Vixen Ekwere, Shine, and Tosyn Bucknor in a photo shoot to support and raise awareness for Cervical Cancer.

TOKE’S Marriage And Divorce
On January 15, 2014, Makinwa had a private wedding ceremony with her lover of 8 years Maje Ayida. But unfortunately, 18months after the wedding, she discovered that her husband had impregnated his long time girlfriend, Anita Solomon which invariably led to the breakdown of the marriage.

Despite the unfortunate incident, she has remained strong and has decided to pick up and move on with her life, on June 16, 2015, she posted this message on her instagram “The amount of emails I have received from women across the world going thru difficult situations is heartbreaking. (Thank you all for sharing). In a world where the popular belief out there is that women hate each other, women can’t stand each other, etc. I have gotten emails/calls from women sharing their own personal pain and that is courageous. I can’t reply everyone, (even though i honestly wish i could.)It is Funny how God uses even the most unbelievable things to bless you. I have been given a voice, a platform, (i don’t even know how it’s all happened) but I woke up one day and I found God and with that came purpose” she wrote.
“It’s never about you, as hard as it seems, sometimes you go thru things not for you but for the people around you who need direction, a word of prayer or more. May God heal every broken heart out there, may his light give you the courage to begin to love yourself. It is tough being a woman, the pressure is real. You don’t have to be a victim, you can rise above it all. Do not let society tell you otherwise. Be Bold, Be Strong. Trust God’s purpose for your life and keep shinning. *And Yes, to all the people asking, there is a Vlog this week *”

AWARDS AND ENDORSEMENTS
Has won several awards including the 2013