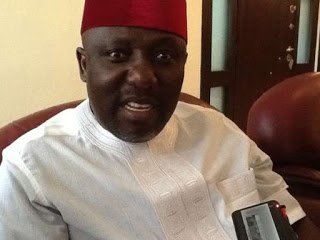 According to a new report by Nigeriainfopedia, the Imo State governor leads the pack of Nigerian politicians which also include former and serving governors in Nigeria.
Okorocha is reportedly followed by Rabiu Kwakwanso with a total of $1.15billion stacked in America Express Bank in New York.
Also on the list are ex-Governor and serving Ministers, Rotimi Amaechi with a sum of $757m and Babatunde Raji Fashola with an estimated sum of $448m.
Ogun State governor, Ibikunle Amosunoccupies position 14 with a sum of $442m while his counterpart, the Oyo State governor,Abiola Ajimobi stays on the number 16 spot with
See the list here >>>
Okorocha

Governor Ibikunle Amosun.  (The Sheet)
Bank: Bank of America
Worth: $442m
Ahmed
Bank: US Bancorp in Minnesota
Worth: $437m
Ajimobi