We would presume following the fuel scarcity in our country at the moment; some Nigerians have come up with a solution to that. Well, you really should learn about FueledUp if you are a fuel consumer. 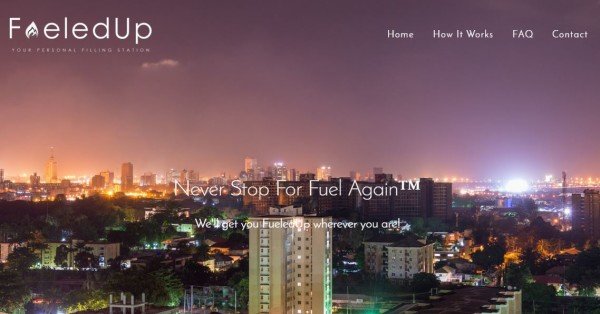 Presently Premium Motor Spirit popularly known as petrol or fuel is
the scarcest commodity in Nigeria, the length of queues at the few
petrol stations that are selling is eye boggling, because of this the
price of various good and services in the country have skyrocketed
(whether they rely on fuel or not).

This has crippled economic activities in the country as precious time
is wasted trying to source for fuel and businesses that are not able to
buy would have to rely on the very unreliable Power Holding Company for
power.

Well, that’s about to end as one young man is bringing up the concept
of buying and delivering the commodity to you at your convenience,
wherever, whenever.

23-year-old Subomi Owo-Odusi
creator of the FueledUp app seeks to make sure you never stop for fuel
again. FueledUp which will launch in May, desires to deliver fuel
straight to its users, starting from Lagos. According to Owo-Odusi,
“This will take away a lot of the pain and pressure and stress of people
waiting for hours.”

This is how it works. First, download the app on your device. On the
app there will be a “Get FueledUp” button that displays the price of
fuel per liter. Fill in the quantity of fuel you need, your vehicle
information and the delivery time frame. You will be charged the cost of
fuel plus a service charge for delivery.

The delivery time frame is in three variants: PRIORITY which delivers in 30 minutes to an hour, EXPECTANT which promises delivery in 30 minutes to two hours, and FLEXIBLE which has a three-hour guarantee. According to Owo-Odusi, “Delivering on time, in traffic-laden Lagos, is the major priority”.

“Whether at home, lunch, or work, we’ve got you covered,” says FueledUp.