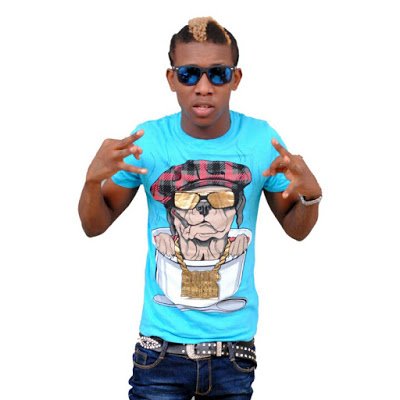 Small doctor is a Nigerian musician who sings in his native language “Yoruba” he came into limelight in 2012 after doing a couple mixtapes and freestyles, as of 2015 he already has huge fan base when to comes to the street in the southwestern part of Nigeria. In 2015 he announced he would start singing in Igbo language too.

Temitope Adekunle aka Small doctor, a native of Ese Odo, Ilaje LG of Ondo State was born in Kano.
The fuji pop artist attended Ain’t Orosan Nursery and Primary School, Oniwaya Secondary School, Capital road, Dopemu, Lagos. He later went to University of Lagos but didnt get to complete because of some personal issues but hope to get back to school.
He discovered his music talent Wen he was in SS1 and knew he had the instinct of composing good songs, this he did wen he composed “E ma kanra mo mi” in 2003, this song he plans to remix in the future.

The self- styles street ambassador crooner is known for saying “hain hain” when singing, this has been his signature since he did his first song.
The name Akeweje was given to him by Alhaji Alabi Pasuma.He came into limelight with his hit songs- gbagaun, anobi, mosquito killer which were all produced by Dre San (an upcoming producer).
He has worked with Side One, Dre Sans, TerryG, OrirseFemi and a host of others.

Well, T.I.N Magazine couldn’t gather much on him, so we are going show you a popular interview he had with Djbaddo.com

Checkout The Interview Below:

CAN WE MEET YOU?
I am TEMITOPE ADEKUNLE by name aka SMALL DOCTOR (a name suggested by my elder brother due to my small stature and because i was addicted to a movie titled ‘DR WHO’. you know that movie nau….. and now its being accepted by the street. though i was formally called BIG DADDY. I attended AINA OROSAN nur/pri sch after which I continued my education at oniwaya sec sch capitol road dopemu. I was a science student. I attended UNILAG.

TELL US MORE ABOUT YOUR EDUCATIONAL BACKGROUND.
As said earlier, I attended AINA OROSAN nur/pri sch, ONIWAYA sec sch capitol road dopemu 2004/2005. I was also a student of UNILAG but had to leave because of some issues best known to me and hoping to get back to school very soon.

WHEN DID YOU START MUSIC?
Ahhh no be today, e don tey ooo. Music has been part of me. i started music professionally in 2001.


WHY MUSIC AND NOT SOMETHING ELSE?

Music runs in my blood even before I was given birth to. My mum is a musician and she sings well. I wasn’t forced to do music, I just love doing music…
IF NOT MUSIC WHAT WOULD YOU HAVE BEEN DOING PROFFESSIONALLY?
Aeronautic engineer, that is why I was a science student back then in school.

HOW WOULD YOU DEFINE YOUR MUSIC?
I do fuji pop……..i never immitated anyone… My style of music is different from the normal type of music others do and I bless God because it has paved way for me in the industry. so I call it AKEWEJE POP.

HOW MANY TRACKS HAVE YOU DONE AND HOW MANY ARTIST HAVE YOU WORKED WITH (locally &internationally)?

Omo cant realy say precisely how many tracks ooo because hmmm.. omo recorded tracks plenty. Have worked with the likes of SIDE ONE, DREYSAN, ORISTEFEMI, Terry G to mention few but presently working on a track with REMINISCE watch out for that…..

HOW WOULD YOU DESCRIBE THE CHALLENGES FACED BEFORE ATTAINING THIS POINT IN YOUR CAREER?
Ahhhh I go talk oo..i faced so many challenges..OLORUN…even then i had to ride motorcycle to get my music done. money happens to be the major challenges but thanks be to GOD..

BUT ITS BEING INSITUATED THAT YOU ARE SIGNED TO PASUMA’S LABEL (WASBAR RECORDS) KINDLY SHED MORE LIGHT TO IT AND TELL US YOUR RELATIONSHIP WITH HIM.

Small doctor is not singed to WASBA RECORD. PASUMA is just like a father to me …We only have a father and son relationship. He’s been so supportive. I’m under a management ” REAL BEAT ENTERTAINMENT”

WHAT BRINGS ABOUT “AKEWEJE OGANLA” AS PART OF YOUR NAME?

AKEWEJE…sigh… its a name I got from ALH ALABI PASUMA. There was a time when baba came back from a trip,he called me to meet him at his residence, on getting to the street children started hailing small doctor then baba(pasuma) said to me ” Wa maa se AKEWEJE” ( come become one who brings kids together) and i honourally accepted it and since then, the name stands.

WHO ARE YOUR ROLE MODELS IN THE MUSIC INDUSTRY?
Yeeba …I want to be like FELA ANIKULAPO, LUCKY DUBE, BEAUTIFUL NUBIA ,RASKY MONO.i must tell you these people i look forward to.

WHAT IS THE MEANING OF “HAIN HAIN” YOU DO SAY IN ALL YOUR SONG?
Its a slang i unconsciously found myself saying… it came up while recording my first track and since then it has been my music signature.

Some time in October this year 2015, there was this news all over the net that Small Doctor fell down from a very high stage and broke his right leg while he was performing in an event. Just few hour after the news broke , Adekunle Temitope a.k.a Small Doctor came out to debunk the news that no such thing occured . The singer said it was just a funny joke because he never fell from any stage .

Some of his popular songs below:
“Olowo “Riches World, Gbagaun featuring Pasuma, Street Bus, Mosquito Killer, Oyinbo” , “Arrest” and don’t also forget that he has worked with some hosts of singers that include Side One, Dre Sans, TerryG, OrirseFemi ,Chinko Ekun, CDQ just to mention a few