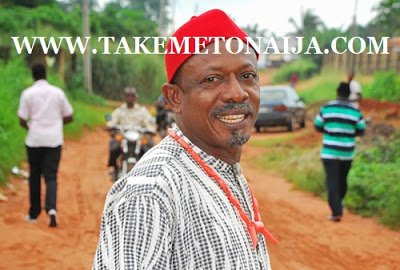 INTRODUCTION
Nkem Owoh popularly known as Osuofia is a veteran Nollywood comic actor, he came into the movie industry as far back as 1987 and he’s remained consistent ever since. Nkem is one of the most popular and controversial actors in Nigeria.

Nkem Owoh had his Primary and Secondary Education at Nsukka. Nkem Owoh began his tertiary Education at the University of Ilorin and completed it at Institute of Management Technolgy(IMT), Enugu where he bagged a degree in Electrical Engineering.

Nkem Owoh began his acting career way back in his Primary and Secondary school days. He knew right from time that he had a talent in acting. Infact Nkem Owoh is one unique Nollywood actor that has a way of interpreting his roles. He is a born natural when it comes to acting.

Nkem Owoh worked with WACO Engineering after his youth service but was unfortunately laid off after a year. That became a blessing in disguise because it gave room for him to get involved with radio and television productions.

Owoh had his first major break in acting when he landed a role in the
screen adaptation of Chinua Achebe’s Things Fall Apart. The 1987 series
had fifty episodes each spanning about 50 minutes and was aired on the
Nigerian Television Authority. As Nollywood picked pace, he landed a
supporting role in both Ukwa 1 and 2 in 1995 alongside other big names
such as Sam Loco and Patience Ozokwor.

During his university studies, Owoh began acting in various television and film productions.
Owoh starred in the 2003 film Osuofia in London. He is also known for performing the song “I Go Chop Your Dollar” about advance fee fraud. The song was featured in the film The Master in which Owoh plays a scammer. The Economic and Financial Crimes Commission and the Nigerian Broadcasting Commission banned the song.

In 2007 Owoh was arrested in Amsterdam, Netherlands (Bijlmermeer neighborhood in the Amsterdam Zuidoost borough) as the result of a 7-month investigation by the Dutch police dubbed “Operation Apollo”.Owoh was arrested while performing a musical show when the police raided the event and arrested 111 people on suspicion of lottery fraud and immigration violations. Owoh was later released. In November 2009 Owoh was kidnapped in eastern Nigera. His kidnappers demanded a 15 million naira ransom. Owoh was released after his family members allegedly paid a ransom fee of 1.4 million naira.

Like any other big star, Nkem Owoh has been accused severally by producers of charging exorbitant appearance fees. The Association of Movie Makers and Producers banned him for making unreasonable demands in 2004. He was among a list of several Nigerian artists who were barred from acting in the country due to their high fees and difficult contract demands.

Nkem Speaking On Com­edy in Nige­ria In An Interview:
“Com­edy was intro­duced at the incep­tion of this branch of art as
slap­stick. At that time, you would come across peo­ple putting on funny
glasses, like the one I am putting on. I am the only per­son
autho­rized to wear a sun­shade at night. You see peo­ple try­ing to
whip up laugh­ter from dif­fer­ent sit­u­a­tions. But now we have
grad­u­ated to a level that you can really make peo­ple laugh even if
you are putting on suit. If God gives you a gift, it is not an easy
thing. I talk, you laugh. I don’t know how I do it, some­times. I am
embar­rassed.
A long time ago, I was asked to say the prayer at a func­tion and I said
in Jesus name and peo­ple started laugh­ing. I take my prayers very
seri­ously and I became very embar­rassed. You see there are good and
bad sides to those things. Any­thing you say, you wouldn’t be taken
seri­ous even when you are dis­cussing seri­ous issues. It hurts when
such treat­ment is meted to you. But I think it is more on the
pos­i­tive side.”

Speaking On His The Hol­land Arrest Expe­ri­ence In An Interview
“I was not arrested in Hol­land last year. It was a kind of expe­ri­ence
that left a bit­ter taste in my mouth. For a bonafide cit­i­zen of a
rec­og­nized coun­try to enter another coun­try and peo­ple saw him as a
sec­ond class cit­i­zen. I was there and their police came in their
num­bers about one hun­dred of them. They came in their ambu­lance, on
air, police dogs and all that. They told me to end the show. I told the
man it’s unfair. I told them that if I was the per­son they were
look­ing for, they should take me, but should not embar­rass the
audi­ence. The man said no and that caused my anger. After that, we
arranged and staged a demon­stra­tion to relate my own side of the
story. If that was the option left to us, I don’t think we were wrong in
fol­low­ing it. Nobody arrested me the way it was reported.”

AWARDS AND ENDORSEMENTS
Has won multiple awards including:
The African Movie Academy Award for Best Actor in a Leading Role.

ENDORSEMENTS
Signed a multimillion naira deal with MTN in 2012 and they’ve been renewing his contract since then.