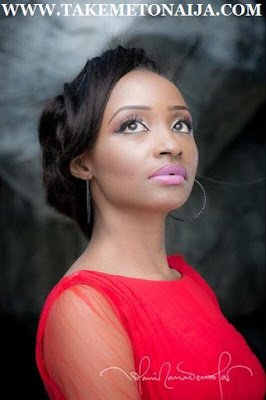 
Rahama Sadau is a Kannywood Movie actress, she came into industry in 2013 after starring in a movie alongside Ali Nuhu, Rahma is quite known for taking up lead roles in big movies, She speaks Hindi due to her obsession with Bollywood, friends and fans call her Priyanka. She has quite a lot of fans.

Rahma Sadau she  was born and raised in Kaduna state. She’s a graduate of Business Administration and management of Kaduna Polytechnic.
According to her, She has always dreamt of becoming an actress since she was young; so, she never thought otherwise when the opportunity came.

She revealed her mum was not comfortable when she told her of her decision to join Kannywood. Her mother doesn’t want her to be far from her; “she believes actors travel to various locations even outside their states. She was skeptical, but after some time she agreed.” she says.

Rahma used to be a dancer she often dances the Hindi dance, she is also a big fan of Bollywood actres Priyanka Chopra, she speaks Hindi fluently and due to that her friends call “Priyanka”.

‘Gani Ga wane’ was her first movie. She featured alongside star actor Ali Nuhu.
In an interview she said;  Acting has been my dream for a very long time, but I didn’t have the opportunity until I met Ali Nuhu who shaped my skeptism and showed me a way, and here I am.

SEE EXCERPTS FROM A REVEALING INTERVIEW;
Q. You’ve been the lead actress already in some of the movies you did, what’s the secret?
(Laughs) I think that’s my destiny to start leading films, not from the minor roles.
Q. Some actors go through a lot of difficulties before landing such big roles. That wasn’t the case with you, should it be attributed to your talent?
They (producers) have their reasons for giving me those roles. Some of them wanted a new face and some believed I was fit for the roles. Either way, it is my destiny to have a strong start.
Q. How is acting alongside Ali Nuhu?
Oh! It’s a dream come true. I almost cried the first day I acted alongside him. I was thinking, is this really me acting alongside Ali Nuhu? Subhanallah! It was a great feeling and he was very supportive and helpful: he showed me how to compose my self… Its great acting alongside him. I hardly slept that day.
Q. How would you describe your first day on shoot?
I was through a strong emotional ride, I was devastated by the confidence and expectation most people placed on me: would I justify it or disappoint them? What if I wasn’t as good as they thought? I was overwhelmed by fear that subsided on realization that I was actually fit to deliver.

Q. What changes in your life after becoming an actress
So many things have changed really: I don’t hang out and talk with half of the people I used to know; new people come in to my life: time becomes very limited and I hardly go out the way I used to. Things have changed that I wonder sometimes if this is really me.
Q. Do you feel like a star already?
(Laugh) I always feel like a star. I have been carrying this ambition and I believed I would achieve stardom one day. I use to see actors like Priyanka and Angelina as my equals. I always see my self as a star.
Q. You are tutored by some as Kannywood’s next biggest actress
(Giggles) That’s a new one. There are bigger actors ahead of me. But you know, that’s what I’m hoping for insha Allah.
Q. We’ve heard you speaking Hindi fluently, have you ever been there?
I have never been to India. I speak the language because I watch a lot of Bollywood movies. I also communicate a lot with some people in Hindi
Q. Why do people call you Priyanka?
Because of that bollywood actress Priyanka Chopra. When people saw the way I love her, they decided to call me Priyanka. I didn’t ask them to. Now you just have to say ‘Priyanka’ if you are really looking for me.
Q. What do you want to achieve as an actress?
Well, I have been thirsty for long. All I want is to act, to quench my thirst and I will get married eventually inshaAllah
Q. …..So marriage plans are imminent I reckon
(Laugh) I wouldn’t say ‘imminent’. Though it’s everyone’s plan. I will marry when the time comes.
Q. Are you single?
Yes. I am single.
Q. So you’re saying Rahma Sadau doesn’t have a boyfriend?
Rahma Sadau doesn’t have a boyfriend. Infact, Rahma is afraid of merging her career with love. Although someday it would happen. The point is, there bound to be problems if I am to merge my career with love. My boyfriend may not even believe me when I say I’m going to a shoot or when he saw me acting a love scene in the movies. We would end up fighting all the time and it would affect my career. Being in a relationship is not a priority at this point. I’d rather focus on my work right now.
Q. What’s the most important lesson that you’ve learnt about love?
I think love has that ability of influencing your life in to something. I’ve learnt a lot. Love has taught me how to talk, how to be myself and how live with people.

Who are your role models?
“My role models are Tiwa Savage and Geneveive Nnaji. As moving now, I’m almost at where I wanted to be. Always dreaming of becoming a successful actress. Now I am! And all I wanted now is to be an international icon.”

On the 2nd of October 2016 The Motion pictures Practitioners Association of Nigeria, MOPPAN, after an emergency meeting on Sunday expelled Kannywood hit actress, Rahama Sadau, from the industry.
MOPPAN is a coalition of associations that set rules and regulations governing the conduct of actors and actresses, as well as production of movies in northern Nigeria.
Sadau’s offence was that she featured in a 4 minute 19 seconds romantic musical video by ClassiQ.
Reactions poured in immediately the video went viral on social media, with some fans of the popular actress criticising her role in it.
“Rahama has crossed the boundary line this time around. The video is all revealing and this is not proper for a Muslim girl to go this extreme in an open video,  “This is not America or Lagos. She should do everything she wanted to do but not to participate in such a video. I know her family will not be happy with her.” says a fan, Maryam Umar, told PREMIUM TIMES.
A communique issued by MOPPAN and signed by it secretary, Salisu Mohammed, stated reasons for Sadau’s expulsion from acting and participating in any Kannywood activities.

Read statement issued by MOPPAN for her ban below:
“Sequel to the recent meeting in which a resolution reached by all guilds and associations under the unified body of Motion Pictures Practitioners Association of Nigeria (MOPPA). That Rahama Sadau has been expelled from the Hausa indigenous film industry popularly known as Kannnywood.
‎“This is as a result of her recent immoral appearance in a certain video song where she appeared in series of visuals (video and pictorial) hugging and cuddling the music artist ClassiQ in his newly released video.
“The leadership of the industry has taken this decision for her violation of its codes of ethics known to all it practitioners.
“By this resolution, the leadership of the industry will no longer tolerate behaviours that are against conduct and ethics laid by the constitution governing the unified leadership of the industry.
“More so, the leadership hopes that this will serve as a deterrent to the actors and actresses to check their public behaviour as they are expected to be good ambassadors to the society they represent.
“Furthermore, a committee has been set to receive and deal with reactions and feed backs to this resolution in respect to the affected actress especially those producers that currently engage her in their projects.

Sadau was earlier suspended in May 2015 for six months by MOPPAN for a squabble she had with popular actor and producer, Adam Zango. She had accused him of demanding sex from her for a role in his movie ‘Duniya Makaranta’.
She later apologised to Adam Zango and in an interview with PREMIUM TIMES, she said regretted what she did.
“I was too childish to have reacted that way,” she said‎.
“But immediately I said that, I wrote back to apologise to him; in fact he is my best friend now.”
Reacting to the new expulsion, Kannywood film promoter and marketer, Hassana Dalhat, told PREMIUM TIMES in Kaduna that the sanction came at the right time and it will serve as a lesson to upcoming actors and actresses.
“In as much as we are entertaining the people we should also be careful of what we give out to the people.
“I have spoken to many of her friends since yesterday and even after the sanction was announced this evening. They were all not happy for the decision of MOPPAN but also could not hide their dismay for Sadau’s performance in the video.
“She has really have gone too far and it is good that she is removed from them (actors) before it becomes a norm among them,” Hassan said.
Sadau is currently on vacation in India and is yet to react to her expulsion from the conservative Hausa movie industry as at the time of this report.

See Pictures From The Music Video That Got Her Banned Below: