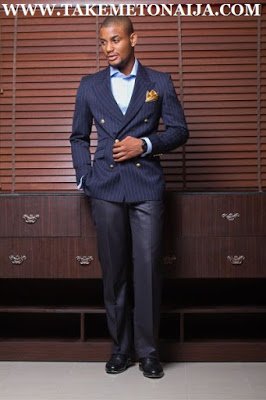 Alex Ekubo is a Nigerian actor and model. He was first runner up at the 2010 Mr
Nigeria contest. Alex is young actor with many awards, he won the Best Actor in a Supporting Role award at
the 2013 Best of Nollywood Awards for his role in Weekend Getaway and more after.

Alex Ekubo-Okwaraeke(popularly known as Alex Ekubo) was born on the 10 April 1986.
Ekubo is a native of Arochukwu, Abia State. He attended the Federal Government College Daura, Katsina State. He studied Law at the University of Calabar, bagged a diploma in Mass Communication from Calabar Polytechnic and as of 2015 he is studying for a second degree in Theatre Arts from the University of Calabar.SPEAKING MORE ABOUT HIMSELF IN AN INTERVIEW:

What is your family background – you have any brothers and sisters?
I am the 2nd born of four. I have an older sister, a younger sister and a younger brother.
What is your educational background and what was your major in university?
I attended Federal Government College of Daura in Katsina State, gained a diploma in Mass Communication from Calabar Polytechnic and studied Law at University of Calabar.
When you were a child do you remember taking part of any school plays?
Yes, growing up, almost every kid in my neighborhood and/or church took part or participated in either school or church drama and play –so to me that was a normal activity. And in university my friend and I use to plan events for entertainment/award show and stuff. We use to get a lot of great compliments for our well organised & successful events, as well as my hosting skills. So that’s when the whole entertainment thing sparked a light in me somewhat.

He is a model as well as an actor and won second place in the 2010 Mr. Nigeria contest. He made his debut into Nollywood in a movie titled ‘Sinners in the House’ produced by Lancelot Oduwa Imasuen. Alex gradually rose to fame and has become a household name. He has starred in several award winning movies  and bagged for himself the award for Best Actor in a Supporting Role at the 2013 Best of Nollywood Awards for his role in the Weekend Getaway. In 2015, he won two awards.

The Award for Outstanding Performance in Nollywood in the 2015 Cross River State Movie Awards and  Actor of the Year award in the 2015 Peace Achievers Award.
Alex Ekubor is listed among Nollywood’s most eligible bachelors. His good looks and humble nature stands him out from the crowd. He is very lovable and a fun person as well.

On His first experience in acting:
Well, when I was younger I got an opportunity to play as an extra in a movie titled “Sinners In the House” by Lancelot Imaseun, who was (and still is a close family friend) and neighbour – so that was my first experience in movie. The experience was awesome and I learnt a lot. I later on got an opportunity to be featured in soap opera called Secrets & Scandals (Season 3) and was also was featured in TV promo ad and Billboard adverts for Chivita. I still currently have a role in Africa’s most popular TV Soap Opera Series by M-NET called “Tinsel”, where I play bartender by name of “Edet”. All these exposures have been great experience to being in front of a camera.

Speaking On His Role In The Movie: Ladies Men:
Well it’s interesting that you asked because it was kinda funny how it happened. See what happened was, it was the last day of shoot for a movie I was working on, and coincidentally one of the marketers for “Ladies Men” came on the set and had observed me. He later got my number somehow and called me out of the blue a week later asking me to fly to Abuja (all expense paid) for a movie shoot. He caught me off guard cos I didn’t know anything about the script – neither did he tell me on the phone, however I always feel whenever an opportunity rises – whether big or small you have to take chances, so without hesitation I flew to Abuja (with no script in hand ahead of time for me to prepare) and went on straight on set.
I was given the script the night before the shoot and that was the only time I had to familiarise myself with the role. When I read for the role, I was kinda shocked cos I was not expecting that at all, and I asked the producer why he had confidence in me that I could pull such an intense role off and especially without much preparation. He said he just knew I could do it and so I should just give it my best shot. And so I did. I didn’t ask more questions I just tuned my mind to do the best that I can to impress and let God do the rest. My first scene was the love scene with my co star Halima Abubakar’s role in the bedroom – and also my first time meeting Halima – so you can imagine how challenging that must have been to be put on the spot like that. But I got in the zone – and I nailed it. I hate to be stereotyped or pigeon holed and always like different challenging roles and that was why I took this role in Ladies Men. I felt it was different.

Some of the movies he has starred in include: In the Cupboard, True Citizens, Undercover Lover, Dream Walker, Weekend Getaway, Gold Diggin, Aina, Keeping my Man, Lagos Cougars, All that Glitters, Ifedolapo, Single Married and Complicated, Champagne, Death Toll, Gbomo Gbomo Express, The First Lady e.t.c

The actor has been manytimes rumored to be dating  star singer; Yemi Alade, but they both have denied it.

As reported in 2017 that Alex Ekubo and his American model girlfriend Fancy Acholonu were recently in Paris to celebrate her birthday. But was it more than a birthday? Did they secretly get married? Hope not he is my crush love him die!
Most celebrities now are going private Banky and Adesua clearly.
is it possible Alex Ekubo got married secretly to Fancy? We know his possibly on set of a movie but something tells me & fans in comments there is a possible coded meaning. We are watching Fancy and Alex in 3D!