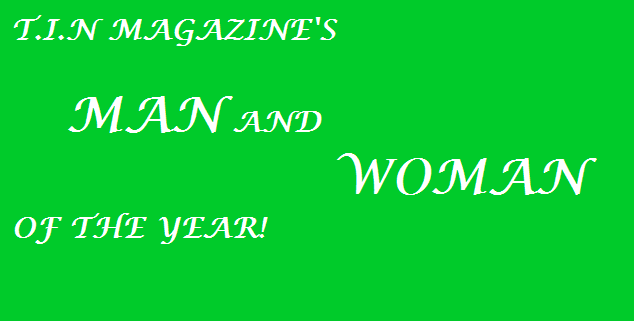 T.I.N Magazine is about to name the MAN and the WOMAN of the year.

You may be wondering what is it about this “The Man Of  The Year” And “The Woman Of The Year” thing.
Well, you should know this is an honour given to the most special people in the country for that year, people whose influence was at its peak, their achievements were spectacular and huge and also was the talk of the year(controversial).

SO HERE IS THE THING: We cant just name them like that without seeking the public’s view on this, that is why you are needed.
T.I.N Magazine has come up with a list of nominees for both the Man Of The Year and The Woman Of  The Year in which we require your votes on who deserves the title and who doesn’t.
So you are going to drop your votes for the person you think deserves to be the Man or the Woman of the year.
So checkout the list of nominees and a few info about them.

NOMINEES FOR MAN OF THE YEAR

Michael Collins as you all know is a Nigerian multi award-winning record producer, singer-songwriter, musician, and CEO of the popular Mavin Records.
Following his influence and accompishments this year he quite deserves to be nominated as the man of the year.
The CEO of mavin records influence in the music industry has been great this year  after introducing a couple new talents to the music industry.
Don Jazzy signed new artists which includes; Korede Bello, Reekado Banks And DI’JA in 2014 and brought them all into success and full limelight in 2015. These artists rocked the music industry so well this year, each of them currently have endorsement deals to their name making in it the best year for their music career.
Not forgetting to mention Don Jazzy produced a lot of hit songs this year in fact he was rated the best music producer of year 2015 by T.I.N Magazine. He also was featured in a couple hit songs this year. Don jazzy met a young guitarist on Instagram as he was impressed he decided to help the kid chase his career, Don jazzy has done so many Generous things this year.

As you all know, President Buhari was elected into office this year as the President of the federal republic of Nigeria.
Politically Buhari is a great inspiration to many people after winning the 2015 presidential election dethroning the incubent president Goodluck Jonathan which makes him the first Nigerian presidential candidate to dethrone a sitting president.
President Buhari inspired a lot of people after running for the post of presidency for 16years  he finally won and became the president which gives people the encouragement of not giving up.
The president who is majorly known for his intentions of fighting corruption in Nigeria publicly  declared his assets after he became the president as he promised in his campaign.
Buhari was quite the talk of the town for the year 2015, he is therefore nominated.

Olamide Adedeji is another music person on the list.  As you all know Olamide to be a popular Nigerian rapper and hit maker. The singer has made a lot of influence in the industry by promoting indegenious rap which can probably be said to be the major rap of the music industry presently.
Olamide is definitely among the most consistent artists in Nigeria.
In 2014 Olamide signed new artists which includes Lil Kesh,Chinko Ekun,Adekunle Gold,Victoh introducing the new talents to the Nigeria music industry and right now has pushed their career to fortune. Almost all the artists on his label YBNL has multiple hits to their names. Olamide was recently nominated in 8 different categories of the Headies awards 2015.
His  influence and achievement in the music industry this year wont be left unnoticed.

Professor Jega is the man behind the Nigeria 2015 elections, he was the chairman of INEC.
He conducted the Nigerian election said to be the most peaceful and open election Nigeria ever had. Prof. Jega introduced a new technology device called Permanent Voters Card (PVC) so as to avoid election rigging and fraud.
He was one of the major topics of the year most especially during the elections almost everybody in Nigeria knew him and talked about him.

Gov. Fayose might actually be said to be the most popular governor of the year, making controversies here and there. Fayose is among the most controversial people in Nigeria 2015.
He won the governorship election of Ekiti state last year which made it his second term in governance after he was impeached in 2007.
Fayose raised a lot of controversies this year after throwing insults at Buhari then the APC presidential candidate and destroying his campaign.
After his party’s defeat in the presidential election a serious impeachment process was carried out on him by the members of the house which he seriously fought back and few months later he overcame and overruled his impeachment.
Fayose won the 16 local governments of Ekiti state filling the house of assembly with PDP members only.
Fayose has been a serious critic of APC and Buhari’s governance in the media.

NOMINEES FOR WOMAN OF THE YEAR

Aisha Buhari is  the first lady of the federal republic of Nigeria. She has been one of the most looked up to women in Nigeria with the part she took in her husband’s presidential campaign and victory. How helpful she’s been to the society and how influential she is.
She is among the youngest first ladies Nigeria ever had and she is loved by many Nigerians for her charitable works.

Yemi is a popular female musician who stepped into spotlight in 2013 and since then have been making waves. Yemi Alade can be said to be the most active female musician of this year, following her song releases,shows,concerts and more. She is the top performing female act of 2015. She recently got  nominated for the Artist of the year award by Headies.

VOTE YOUR MAN OF THE YEAR

VOTE YOUR WOMAN OF THE YEAR

These polls will run till the end of this month so keep checking to see live results.

KINDLY DROP YOUR VOTE AND SHARE THIS PAGE WITH YOUR FRIENDS!