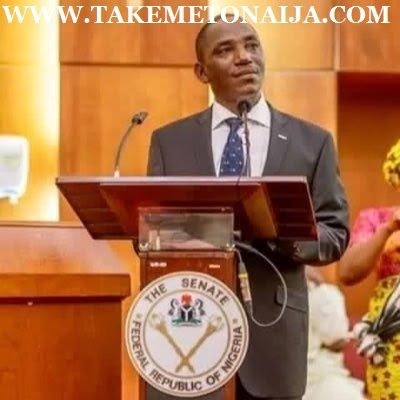 INTRODUCTION
Barrister Solomon Dalung is a Nigerian lawyer and politician, he was appointed minister of Youths and Sports by President Buhari in year 2015, he has since then been controversial due to several reports about his bad performance as a minister.

Against the tradition of joining the military that is common to tarok people of Langtang, Dalung chose to join the Nigerian Prisons Service in the early eighties. In 1991 while still in the Prisons Service, he enrolled to study Law at the Faculty of Law, University of Jos. The unpredictable academic calendar that characterized the Nigerian University atmosphere at that period saw him spending a whole nine years before bagging Bachelors of Laws, (LLB). He proceeded to the Nigerian Law School, Bwari, in Abuja, graduated in 2000 and was called to the Nigerian Bar in 2001.

After passing out from Law School, he took up political appointment as Personal Assistant to Chief Solomon Lar,CON, when Lar was appointed as Adviser Emeritus to President Olusegun Obasanjo. This job lasted until 2003. In 2004, he took up an appointment with the Faculty of Law of the University of Jos as a lecturer. As a lecturer, he has had the opportunity of attending leadership trainings courtesy international Human Rights Organizations. In 2005, he combined his job as a lecturer and study while pursuing a post graduate degree in Law. His Masters in Laws (LLM) program successfully ended in 2007 and was appointed the Chairman of Langtang South Local Government Area the same year. As Chairman of Langtang South, he also served as the Plateau State Deputy Chairman and later Chairman of the Association of Local Government Chairmen of Nigeria (ALGON). His tenure as Local Government Chairman ended in May 2008. He then returned to the University of Jos. He made an attempt at representing Langtang North and South at the National Assembly but lost.

Dalung joined the Prisons Service as a Prison Assistant in 1982 and rose to the rank of Assistant Inspector of Prisons. Following his training as an attorney, he was moved to the Legal Department at Prisons Headquqrters Abuja in year 2004 where he served as Legal Officer II in the prisons headquarters prior to retirement in December of that same year.

Dalung’s strong condemnation of the political regime is inherited, as political criticism runs in the family’s blood up to his great grandfather. According to Dalung, “governance is a social responsibility and a democratic leader is equivalent to a human god, having the responsibility to determine the destiny of fellow human beings. He did not acquire power by conquest, strength or might but either by charisma, bureaucracy or law. There is an instrument that confers that power on him and is expected to exercise it within the parameter of the enabling authority.” Abusing this power irritates him. This is not just an additional factor that shaped his critical political attitude but the most dire of these factors.

In Langtang South Dalung is referred to as “the man who brought coloured roofing sheets,”due to his massive infrustrational transformation of public facilities during his tenure as Chairman. He is a Christian and is married to his wife, Naomi, whom he fondly refers to as First Lady, her status while in office as the wife of a chairman and is a father to six children, Changfa, Nalfa, Selbol, Malmicit, Manmak and Nanya.

Solomon was appointed minister of Youths and Sports by President Buhari in
year 2015, he has since then been controversial due to several reports
about his bad performance as a minister.

In 2017 his first wife was reported dead, president Buhari and other politicians expressed their grief
with the family.